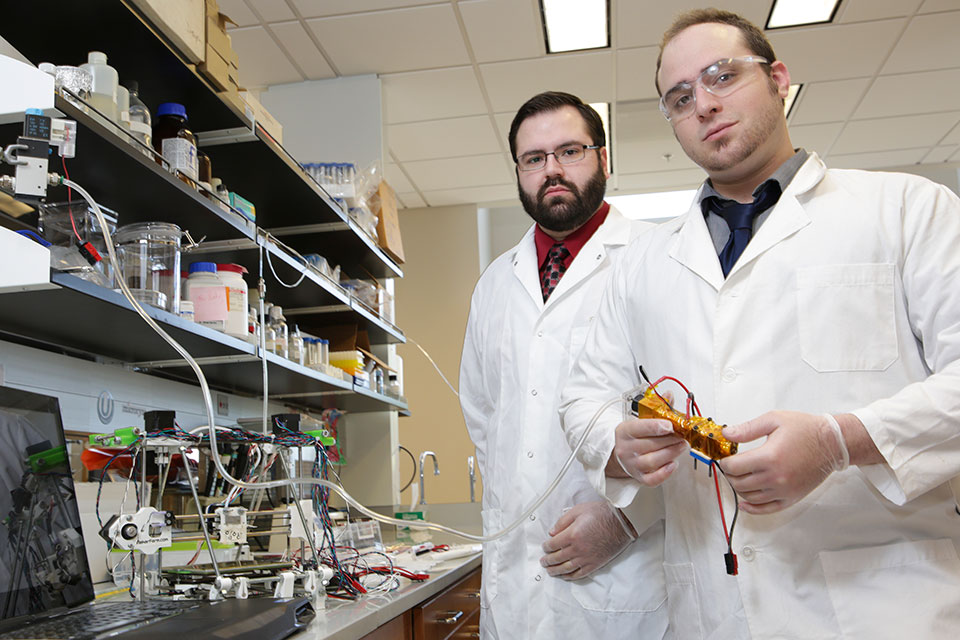 Devon Bane, left, and Tanner Carden with their CarmAl extruder in a lab at UAH's Shelby Center for Technology.

A specialized 3-D printing extruder developed by a University of Alabama in Huntsville (UAH) sophomore and his collaborator could lower the costs of printing cellular structures for use in drug testing.

Normally a UAH mechanical and aerospace engineering undergraduate student, Bane is taking the semester off to catch up with the numerous inventions and commercial projects with which he's involved.

The CarmAl extruder's name is also a play on words, since the inspiration for the technology came from 3-D printers developed to make specialty candies.

"We're using the sugar molecules in a form of reverse 3-D printing," says Carden. "In this process, we first make the structures we want and then we embed them into a cellular matrix. "After cells held in suspension in an agarose solution are grown around the vascular structure, a solvent can be used to wash the sugar away.

The result is a cell mass that contains vessels like a human organ would. That's an advantage for drug tests over flat-dish cell cultures currently used because it more accurately represents living tissue and more of the test cells can be kept alive by vessel-supplied nutrients. "It helps to prevent necrosis in your sample," says Carden. For example, if the process were used to create liver cells for a drug test, the resulting product "would actually have vascularization in it that is modeled on how a liver works."

Awarded $9,948 in Charger Innovation Fund support for further development and advised by Biology Department Chair Dr. Debra Moriarity, the device's creators aim to lower production costs of testing cultures to allow drugs to be screened for failure earlier, saving on the cost of drug development.

"This specific technology is only about two years old," Carden says. It originated from work by the University of Pennsylvania. When he and Bane became interested, Carden was awarded a UAH Research and Creative Experiences for Undergraduates Program (RCEU) grant to work with Dr. Moriarity on this project. He used some of his stipend to purchase an inexpensive printer kit and then modified the kit to produce parts that were upgrades to itself. "Our whole goal was to keep it cheap and keep it simple."

We're using the sugar molecules in a form of reverse 3-D printing. In this process, we first make the structures we want and then we embed them into a cellular matrix.

One day while pondering how to further modify the kit extruder to become what they needed, Bane suddenly had an inspiration.

"He thought it up on the spot and he freehanded a drawing of it," says Carden. "Then he brought me this complex technical drawing that my dad understood, and the next day my dad handed me this extruder. It's very simple and designed much like a syringe."

After charging his son $12 for the aluminum used, Rodney Carden machined the extruder at General Dynamics Global Imaging Technologies in Cullman.

The printer system uses software to control a solenoid valve that regulates the timing of nitrogen pushing on a sugar solution in the CarmAl extruder. The device uses a modular tip and a heated process at temperatures higher than other extruders to better control the viscosity of the sugar solution for more accurate vascular structures.

The next step is growing cells around the sugar structures created, and Carden is planning to travel to Wake Forest University's Institute for Regenerative Medicine to learn from a program already using cells in the 3-D printing of biological structures about the techniques and pitfalls involved.

"What we're looking to do with this new funding is to increase the proprietary features our process has," Carden says. The pair is especially keen to fully develop unified proprietary software. "I think that's going to allow us a lot more flexibility in the future because having to make all these open source software programs talk to each other has been the biggest pain."

Further advances to their system could include addition of 5-D printing capabilities, which would allow the current grid-like vascular structures to flow and branch in a more natural fashion and truly be created in three dimensions.

The future is bright for the field, Carden believes, and the day will arrive when a patient's own cells will be used with the printing technique to create new replacement organs.

"In five or 10 or maybe 20 years, it will become affordable to actually print a liver or a heart," he says. "At some point you get to the use of stem cells, and personalized medicine becomes very affordable."