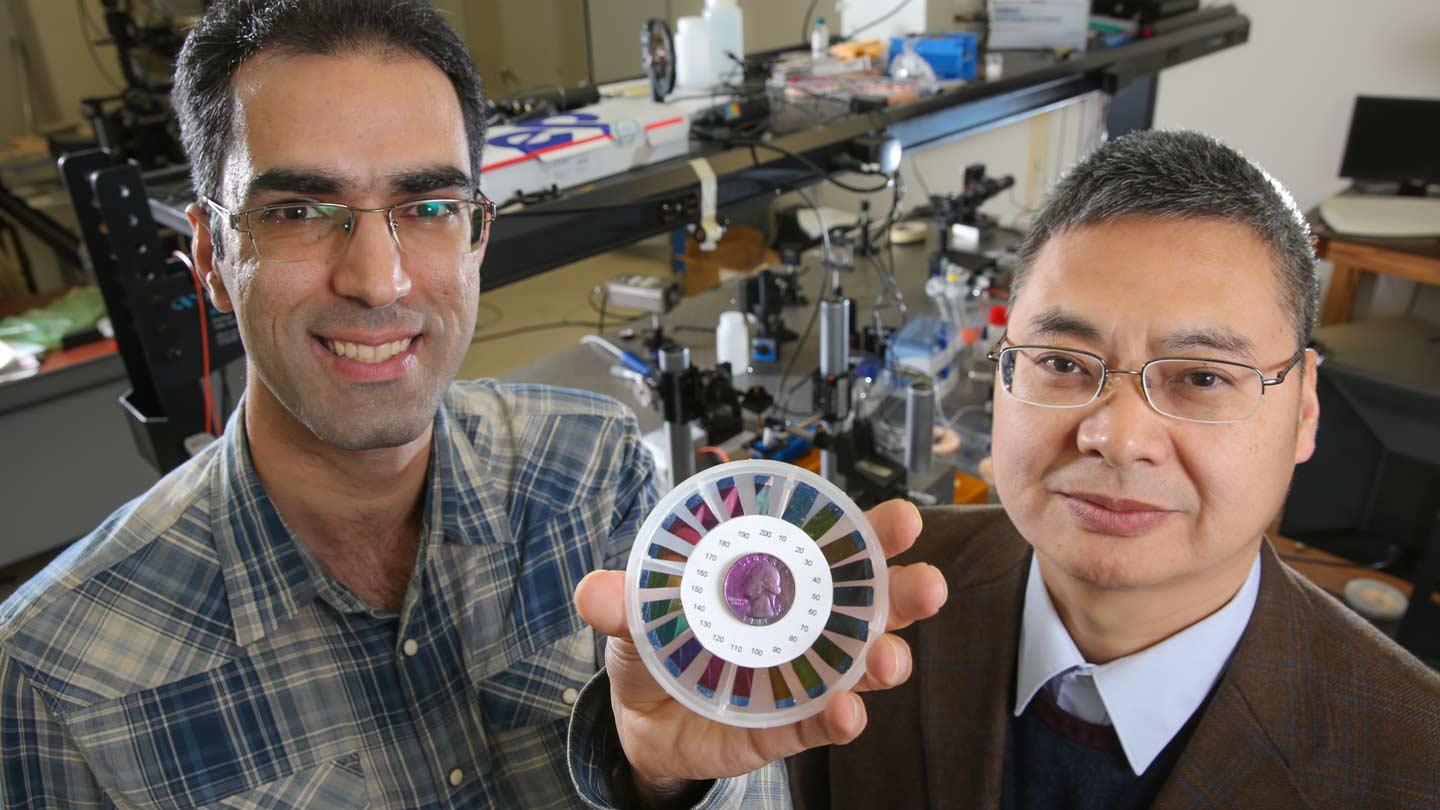 Doctoral student Seyed Sadreddin Mirshafieyan and Dr. Junpeng Guo in Dr. Guo’s lab with a disc showing a rainbow of optical colors created with ultra-thin layers of silicon. The quarter in the center of the disc has also been coated.

A new technology, which creates a rainbow of optical colors with ultra-thin layers of silicon, has been recently demonstrated by a research group at the University of Alabama in Huntsville (UAH).

Vibrant optical colors are generated from ultra-thin single layer silicon films deposited on a thin aluminum film surface with a low cost manufacturing process. The optical colors are controlled by the thickness of silicon films. The thickness of the silicon films ranges from 20 to 200 nanometers for creating different colors. For reference, 100 nanometers is about 1/1000 of the thickness of a single sheet of paper. One nanometer is about two atomic layers of silicon. The silicon color coating process can be applied on almost any material surface. In fact, the team has colored quarters, turning them into a variety of colors.

"The reason we chose silicon is not only because silicon is a low cost material and has been widely used in electronics industry, but also most importantly, silicon is an indirect bandgap semiconductor material with both high index of refraction and low optical absorption in the visible spectrum. The combination of high index of refraction and low absorption enables strong optical wave interference inside ultra-thin silicon films, a physical process that results in colors," says Dr. Junpeng Guo, professor of electrical engineering and optics, who has published the result with his graduate student, Seyed Sadreddin Mirshafieyan, in a recent issue of Optics Express, vol. 22, issue 25, p. 31545 (2014). The work was also highlighted and reported by Laser Focus World magazine.

Colors seen from flowers in nature and chemical materials are caused by wavelength selective light absorption in organic molecules. Currently, colors on computer and iPhone screens come from dye materials pre-placed on the pixels. Colors of chemical dyes only work in a limited range of temperatures around room temperature. The demonstrated silicon colors can sustain high temperatures and harsh environment.

"The reason these colors are so vibrant is because one wavelength of light is completely absorbed," explains Dr. Guo, while his student holds a collection of color samples. "And the colors are very durable. A lot of colors you see in nature are due to wavelength selective light absorption in organic molecules which cannot withstand high temperatures," he says. Ultraviolet light destroys organic dye molecules over time, leading to color change and fading.

The new technology may hold promise for many applications such as for jewelry, automotive interior trim, aviation, signage, colored keypads, wearable and electronic displays.