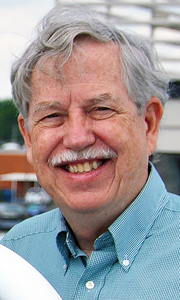 HUNTSVILLE, Ala. (February 13, 2012) — A team of scientists from The University of Alabama in Huntsville's Earth System Science Center is working with the Japanese space agency to develop new rules to protect spacecraft from lightning.

Data from instruments being installed aboard a small jet will help the Japan Aerospace Exploration Agency (JAXA) develop guidelines that can be used to determine which clouds over the Tanegashima Space Center launch site pose the threat of triggering a lightning bolt that could damage or destroy a launch vehicle.

A problem, according to Hugh Christian, an Earth System Science Center (ESSC) principal research scientist, is that when the Japanese apply NASA's rules for launch safety to their climatological conditions, they find those rules to be very restrictive.

"For instance, NASA has what is called the 'thick cloud rule,'" he said. "Basically, any cloud above the freezing level that's 4,000 or more feet thick will stop a launch. Well, those kinds of clouds are very common during Japan’s winter launch window, and it is quite probable that in most cases those clouds are only very weakly electrified and pose no threat to launch safety.

"We're going to fly this specially-instrumented aircraft through these clouds to see if there is any chance they might be a threat for triggering a lightning flash."

Christian and the UAHuntsville team have been involved in similar research campaigns around NASA's Cape Canaveral launch facility since the 1990s, and helped develop NASA's lightning safety protocols.

The problem, he said, is that NASA's guidelines, while very safe, can also be very restrictive."If you have to delay a launch it can cost as much as a million dollars a day," Christian said. "So you want to be sure the rules you use to cancel that launch are optimal."

The six instruments installed on the business-size jet are electric field mills, which measure the atmosphere's static electrical field. Flying them through a cloud or storm can tell the UAHuntsville team how much of a lightning threat that system presents.

They hope to merge that data with information from a nearby weather radar to develop a set of standards for judging lightning threats based on cloud height and radar reflectivity.

The flights are scheduled for later this month, with Christian and three members of his lightning research team on site in Japan. The three-month project is supported by a $250,000 research contract from JAXA.