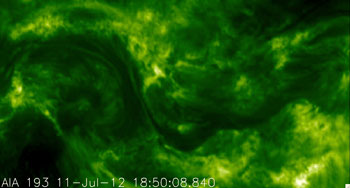 Courtesy NASA
These photos of the solar corona, or million-degree outer atmosphere, show the improvement in resolution offered by NASA's High Resolution Coronal Imager, or Hi-C (bottom), versus the Atmospheric Imaging Assembly on NASA's Solar Dynamics Observatory (top). Both images show a portion of the sun's surface roughly 85,000 by 50,000 miles in size. Hi-C launched on a sounding rocket on July 11, 2012, in a flight that lasted about 10 minutes. The representative-color images were made from observations of ultraviolet light at a wavelength of 19.3 nanometers (25 times shorter than the wavelength of visible light). 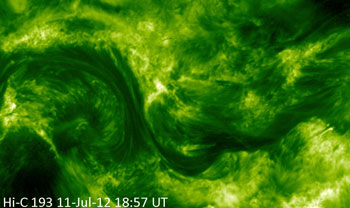 Work done in part by The University of Alabama in Huntsville has enabled a group of solar scientists to see into the sun’s corona in unprecedented detail.

Scientists and engineers from the Smithsonian Astrophysical Observatory (SAO), Marshall Space Flight Center and UAH teamed to align mirrors on the High Resolution Coronal Imager, or Hi-C. Following that work, the imager captured the highest-resolution images ever taken of the million-degree solar corona, using a resolution five times greater than previous imagers. Hotter than the solar surface, the corona is where solar flares occur and release energy that drives solar storms that can impact Earth.

The imager’s high-quality optics were aligned with extreme accuracy. Mounting of the mirrors in the telescope was done using a new method that significantly reduced the impact of the process on the shape of the mirrors.

Weighing 464 pounds, the 6-foot-long Hi-C telescope took 165 images during a brief 620-second sounding rocket flight July 11. The telescope focused on a large active region on the sun. Some images reveal the dynamic structure of the solar atmosphere in fine detail. When combined with the full sun images from NASA’s Solar Dynamics Observatory (SDO), they provide a new picture of the solar corona.

The mirror alignment work involved maintaining optic spacing to within a few ten-thousandths of an inch. This innovative approach to aligning and installing the mirrors then had to be maintained so the instrument could survive the harsh vibration and thermal conditions during launch and flight of the rocket.

Hi-C's mirrors are approximately 9.5 inches across, roughly the same size as the SDO instrument’s mirrors. However, due to a set of innovations on Hi-C’s optics array, the nimble telescope was able to peer deeper into the sun’s corona in the extreme ultraviolet wavelength.

“These mirrors were to be the finest pieces of glass ever fabricated for solar astrophysics,” said Marshall heliophysicist Dr. Jonathan Cirtain, principal investigator on the Hi-C mission. “We had never attempted such a program before and had to develop new techniques for grinding the optics and polishing the surfaces, not to mention figuring out how to mount them without diminishing the performance. The final mirror surface is so smooth that it only deviates from being perfectly smooth by a few angstroms over the 24 cm optic.”

Using these quality optics, images were acquired at a rate of approximately one every five seconds and provided proof of a long-standing theory to explain solar coronal dynamics.

The optical design was provided by scientists and engineers from Marshall’s Science and Technology Office as well as SAO personnel. “Dr. Cirtain asked us to develop the mirrors initially to see how well we could make them,” said John Calhoun, Lead for Optics at Marshall. “The initial specifications were only a goal; however, we made such excellent progress on them that Dr. Cirtain was able to get the funding for his flight demonstration. Credit belongs to the superb work performed by our senior opticians, although their initial response to the very challenging fabrication was to refer to the optics as the ‘oh, my god’ mirrors.”

Scientists at Lededev Physical Institute in Moscow, Russia developed the filters for the instrument front aperture plate. These whisper-thin filters reject the unwanted wavelengths of light and only transmit the extreme ultraviolet spectrum.

Scientists have worked for the better part of a decade designing and building test facilities, followed by development, fabrication and testing of the optics.

"This flight represents the culmination of thirty-years of effort to develop these exceptionally high quality optics," said Co-investigator Dr. Leon Golub of SAO.

Marshall scientists and engineers also partnered with engineers from the University of Central Lancashire and Apogee Imaging Systems in Richmond, CA to develop a large format camera detector (16 megapixel) with a high speed image readout. The combination of the optics, the telescope and the camera system combined to deliver the highest cadence and highest resolution image set yet collected for the solar million degree atmosphere.

“As for the findings from Hi-C, the most important implication to me is the realization that at 150 km spatial resolution and an image cadence of 5 seconds, solar astrophysics can make multiple major advances in the science of how stars work and evolve,” said Cirtain. “That, I find, is breathtaking, especially for a sounding rocket to discover.”

Partners associated with the development of the Hi-C telescope also include Lockheed Martin's Solar Astrophysical Laboratory in Palo Alto, Calif.; the University of Central Lancashire in Lancashire, England; the Lebedev Physical Institute of the Russian Academy of Sciences in Moscow; and the Southwest Research Institute in Boulder, Colo.