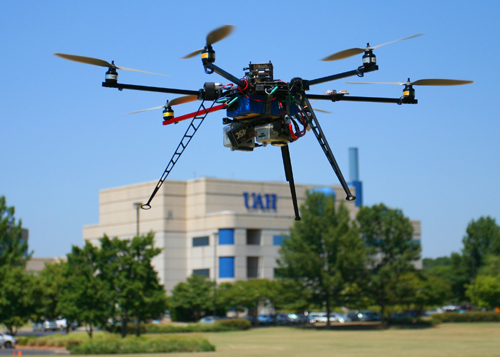 HUNTSVILLE, Ala. – What amounts to serious scientific research could, at first glance, be mistaken for students at The University of Alabama in Huntsville letting off a little stress with radio-controlled helicopters.

On a recent sunny, humid day, the air near the university’s Optics Building is filled with the buzz of small helicopters hovering over parking lots, their tiny video cameras sending back amazingly clear images of a wide expanse of ground below.

It’s all part of work being done by UAHuntsville’s Systems Management and Production Center at Von Braun Research Hall. Directed by Dr. Gary Maddux, SMAP is the largest of UAHuntsville’s 15 research centers.

Under the program, several UAHuntsville students are working to develop micro-UAVs that could provide low-cost surveillance while enhancing the variety of uses for these UAVs. The U.S. Army’s Aviation and Missile Research and Development Center (AMRDEC) on Redstone Arsenal provided the original program funding.

William Sabados and Norven Goddard direct a small cluster of students working to enhance the use of small, commercial, off-the-shelf helicopters to be more useful for both military and commercial purposes.

While the research is conducted at UAHuntsville and most student researchers are pursuing various UAHuntsville technical degrees, students from other north Alabama universities, and even a few from area high schools, have gravitated towards the program, said Sabados, who pairs students with research projects.

Those students span a wide range of technology curricula, from computer science and software engineering majors to aerospace, mechanical, and electrical engineering majors. Even graphics majors are getting involved, which Goddard said adds an important dimension to the work of the student teams.

“They have the ability to put it on paper and see how the design actually flows together.  Visual is the way to go,” Goddard said.

Terming the high level of technological capabilities of the student researchers “a state asset,” Goddard said he hopes most of the graduates will find employment for their skills and talents right here in Alabama.

Goddard, of the Space and Missile Defense Command’s Future Warfare Center, calls the program a resource that allows the military and first responders to tap the skills and abilities of students.

Their research supports the ongoing evolution of military intelligence, surveillance, and reconnaissance (ISR). ISR platforms are getting smaller and less costly, important in an era of increasing constraints on military R&D budgets. At altitudes of just a few hundred feet, they can peer down on enemy troops below while remaining practically invisible.

Tighter budgets and the need to capture the benefits of emerging technologies also push the desire for what Goddard terms “the 80 percent solution.”

“We want to take these emerging technologies and apply them where we can get a 70 to 80 percent solution that we can use right now.”  From a military standpoint, he said this eliminates some of the need for costly R&D programs that might develop a technology to a complete solution, only to have that technology become obsolete by the time that solution is achieved.

Sabados explained that “disruptive technologies” such as mini-UAVs have the potential to change the way surveillance is done, both for soldiers in theater and for first responders or law enforcement authorities.

Everything in aerial surveillance is getting smaller, lighter and less expensive. The mini-copters often carry tiny cameras that are marvels of miniaturization. Student researcher Aaron Laney holds out a camera currently being used that’s about the size of a stack of three dominoes, and said the trend is for them to get ever smaller.

And while the military benefits are obvious, law enforcement and first responders are showing increasing interest in the tiny aerial platforms with their advanced cameras and other sensors. First responders could use them for low-cost surveying of post-tornado damage, or to survey the scene after a bad auto accident. Law enforcement sees uses ranging from looking for fugitives to find missing persons such as small children.

While military and civilian uses drive the research, Goddard also points to the influence of hobbyists, ranging from college students to retired engineers, who continue to push the envelope of new innovation. “The hobbyists have turned the game on the UAV community,” he said. “They’ve pushed so hard on the designer and manufacturer community that they’re producing components that are equal to those of large UAVs such as the Predator. The capabilities are becoming truly astronomical.”

Student researcher and computer science major Aaron Laney comments on a video of a six-rotor mini-copter flying over a UAHuntsville parking lot.  The team, he said, is now able to program a GPS chip that allows the mini-copters to fly a semi-autonomous flight pattern.  “You just punch a few keys and tell them to fly the mission.”

Goddard predicts a near future capability that will allow re-programming the GPS for totally autonomous flight of a swarm of several helicopters flying in close formation. “What you would do is program, launch, and walk away,” he quipped.

That “swarm” of several helicopters are to fly in close formation. Each helicopter would carry a different sensor, allowing observers on the ground to get better overall situational awareness of what’s on the ground that they could not otherwise see.

Another push is for low-cost production. The confluence of UAV miniaturization and low-cost, three-dimensional printing may allow for parts to be designed using computer-aided design programs, then instantly manufactured using 3D printers, according to Goddard.

He said the original program, nearing completion, has been quite successful with ideas emerging that will give new students new programs to explore.

The experience from the research activities can look good on a resume, said Goddard.

“It gives them the practical experience to go along with classroom theory,” he said. “They’ll have something to put on their resumes that will put them miles ahead of other graduating students.”