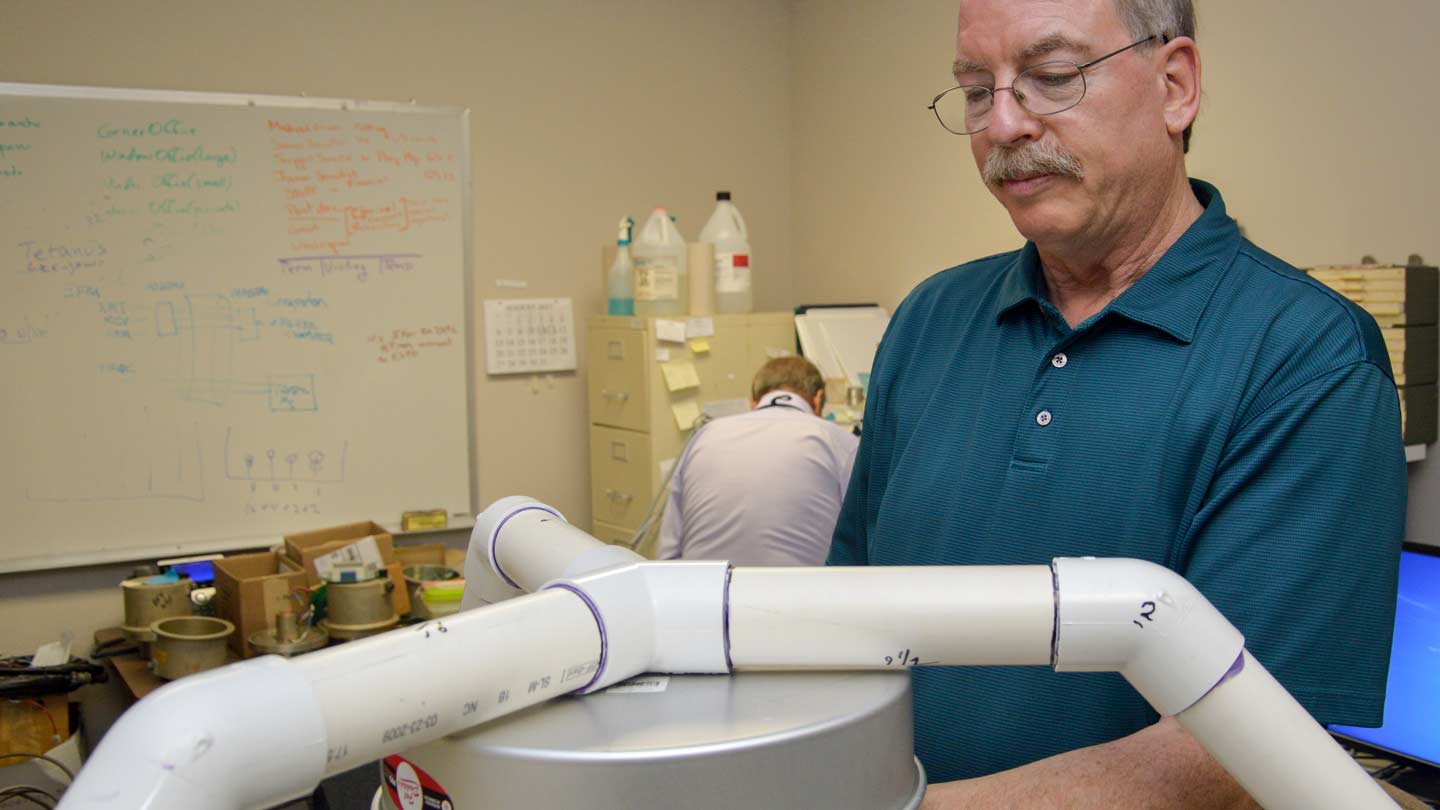 UAH's Mike Stewart shows how a Fat Daddio's cake pan will be attached to the stand of an electric field change meter.

Scientists at The University of Alabama in Huntsville (UAH) are welcoming Fat Daddio's cake pans to the world of 'high powered' weather research.

High powered because the pans are being used to build sensors to measure lightning and to probe Earth's electric field during thunderstorms. 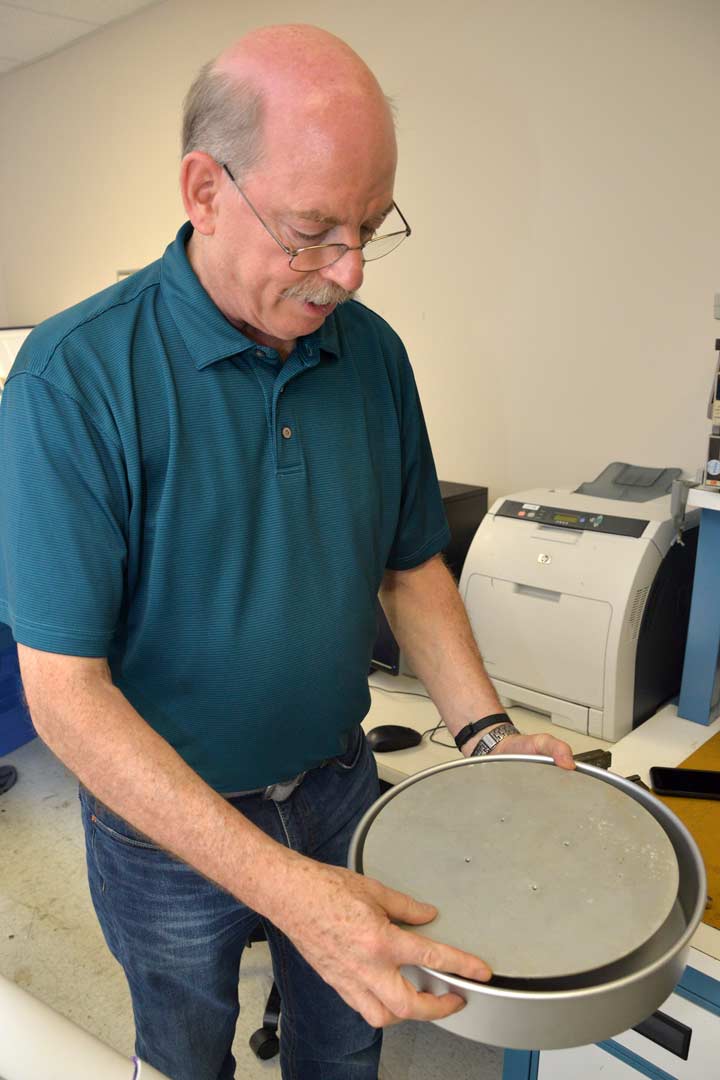 Mike Stewart, a principal research engineer at UAH's Earth System Science Center, shows how a sensor plate and its electronics will fit inside a large cake pan.

"We needed something with a flat surface we could attach to the instrument stand," explained Mike Stewart, an ESSC principal research engineer and the principal designer of the new sensor system.

The mixing bowls are hemispheric, with a flat bottom. An extension pipe was used to attach them to welded aluminum stands, resulting in a less stable, cantilevered configuration that can wobble and shake in the high winds common during strong thunderstorms.

"The point was to come up with something inexpensive, that could be produced by students, and that's rigid and stable," Stewart says. "You don't want it to shake in the wind. If that happened it would look like the Earth's electric field is shaking."

The search for a cylindrical flat pan wide enough and deep enough to house both the sensor plate and its electronics began. A colleague at New Mexico Tech recommended Fat Daddio's, and Stewart was ready to cook up a new sensor stand design.

"I always marvel at the different uses our customers find for our products," says Greg Skipper, who describes his position at Fat Daddio's as "vice president, one of the owners, and chief bottle washer."

"We have customers who use our cake pans for molding concrete and others who use them as stoves for backpacking," he says. "The U.S. government buys them for the nuclear submarine force, but the guy who buys them can't tell us what the Navy uses them for."

Between the cake pan ($18 online), several yards of PVC pipe from Home Depot, pipe joints from an online plumbing supplier and some pipe glue, Stewart figures he has about $60 tied up in the prototype sensor stand. Check off the inexpensive part.

Ease of assembly is important, since the plan is to make about ten of them, perhaps using student labor. Being able to ship the pieces and assemble them on site also is important, because one of UAH's lightning researchers — Dr. Phillip Bitzer — plans to use most of the first batch either as part of an ongoing lightning research program in the forests of Panama or as part of a large National Science Foundation-funded campaign to study storm systems in Argentina in 2018.

"The flat bottom surface makes it easier to mount, plus it can stay attached to the top part when we're moving it," Stewart says. "Any time you disassemble a sensor there's always a risk it won't go back together just right."

Just a bit of physics

Both the cake pan cover and the sensor plate inside it are round because any shape with corners would warp the field change meter's sensitivity, Stewart says.

A round cover and sensor mean the Earth's electric field lines are attracted equally to each part of the sensor. With any shape that has corners, such as a square or rectangle, the electric field is drawn disproportionately to those corners. That would skew the data collected using that sensor.

"The Earth's electric field lines are vertical to the ground," Stewart says. "When they approach the cover, they want to bend so they're perpendicular to the surface when they get there. Some of those field lines are bent completely around the cake pan, so they go under the cover and touch the sensor."

When lightning strikes — either cloud to cloud or cloud to ground — it causes an electromagnetic shock wave that pulses through the Earth's electric field. The field change meter picks up that pulse.

Using three or more sensors separated by several miles, UAH scientists can use the different times the pulse arrives at each sensor to triangulate where and when that flash occurred. If they know the when and where, they can use the sensor's data on the strength of the pulse to calculate the power of that lightning flash.

Scientists at UAH hope learning more about the energy released by lightning will help them better understand how storms build, how much energy they generate and how that energy relates to whether a run-of-the-mill thunderstorm becomes a severe weather event.