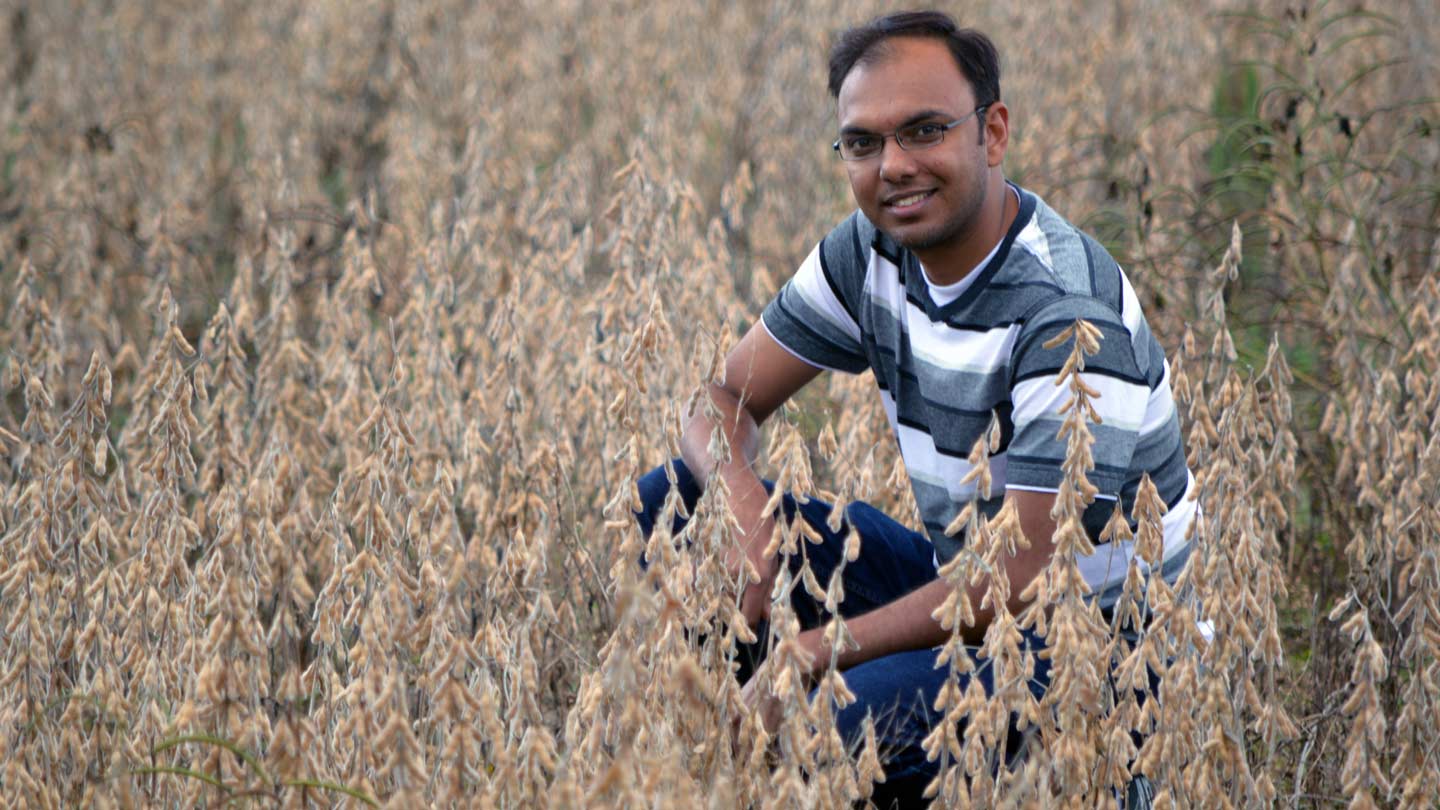 It was easy to collect soil moisture data from this soybean field near the UAH campus. New techniques developed by Vikalp Mishra, right, in UAH's Earth System Science Center, may soon use data from satellites to improve crop forecasts around the world.

A team that includes a graduate student who received his Ph.D. on Sunday from The University of Alabama in Huntsville (UAH) has taken a major step toward developing a satellite-based tool to improve crop yield estimates in the U.S. and around the world.

Using data from NASA and NOAA satellites, a team led by doctoral student Vikalp Mishra developed a technique that provides soil moisture data at both the soil surface and at the level of a farm plant's roots. Plugged into a crop model, that soil moisture data reduced the error rate in corn yield estimates by more than two thirds.

Mishra, who received his Ph.D. in civil engineering during UAH's commencement ceremonies on Sunday, Dec. 10, has been accepted for a NASA post-doctoral fellowship. In January, he will continue work on the soil moisture project at NASA's SERVIR center in UAH's Cramer Research Hall.

While the proof-of-concept test project that was Mishra's dissertation research looked only at one crop in a handful of sites in the southeastern U.S., Mishra said a system to look at farming regions around the world — and to provide better warnings of impending crop failures and famine — might be available within three to five years.

Mishra became interested in water resource management growing up in Indore, a city in central India. That is a dry region where rain falls only two or three months of the year "and we used to get drinking water once a week," he said.

While much of the interest in his work — which was supported by a NASA Earth and space science fellowship — has come from developing countries where food shortages are more common, "even in the U.S., irrigation and soil moisture data are not always available," Mishra said. "Even in data rich countries, there are problems."

"This could be important in places that aren't accessible or where you just don't have the resources to gather that kind of data," said Dr. Jim Cruise, a research scientist in UAH's Earth System Science Center who is retired from UAH's civil engineering faculty. "It does have that potential. There are several different people in places around the world who are interested in this work."

The algorithm developed by Mishra uses data from NASA and NOAA polar-orbiting satellites. Microwave data provides information about moisture at the surface, while thermal infrared data provides moisture estimates from the root zone.

"We used a model that compares morning temperatures to afternoon temperatures," Mishra said. "If it is dry, the temperature rise is sharp. If the soil is damp, the rise in temps is less. The model uses that information to derive an estimate of soil moisture."

That data was plugged into a crop model.

While the satellite data's resolution isn't very fine, "the relatively noisy information from satellites is better than no information at all, which is what you have over a majority of the planet," Mishra said. "Now, if there is going to be drought, you can prepare for that. All decision making can be improved if the information becomes more reliable."