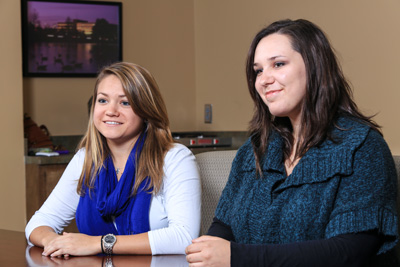 HUNTSVILLE, Ala. (Nov. 18, 2013) - Somewhere out there, there's a young girl in grade school who finds she has a burning interest in building things. Maybe she finds herself more drawn to math, science experiments and mechanical devices than dolls. She wonders how things work, and how they could work better.

Amy Parlett and Carolyn Boos want to say some things to that youngster, and to the thousands of grade school-age girls like her - the girls who find that they are drawn to the so-called "boy interests" of engineering, science and technology:

That's what works for them. Both are undergraduate student employees at The University of Alabama in Huntsville's (UAH) Propulsion Research Center. Parlett's a senior in aerospace engineering and Boos is a junior in mechanical engineering. Both are enthusiastically pursuing their engineering interests even though they say they've long felt the societal pressures pushing them to abandon that in favor of more traditional girls' pursuits.

Parlett, who's the proud owner of two hot pink and blue rockets she flies from time to time, grew up as a young girl with her eyes to the sky in her backyard as military aircraft flew overhead from Fort Bragg, N.C.

I feel like a lot of girls could be engineers but they weren’t raised in an environment where they could be encouraged. I think a big thing would be changing the image of engineering from ‘Oh, it’s a guy thing,’ to realizing that girls can do it, too.

"I looked up and I kept watching these aircraft flying over my house every day, and one day I said, 'You know, I like aircraft!' I was four when I was standing in my backyard watching a plane fly overhead and I told my parents I wanted to go on an airplane ride when my piggy bank was full. That day finally came when I was in kindergarten and I was hooked. The military aircraft helped spark the interest I have in the defense industry," she says. "I decided to major in aerospace engineering in sixth grade after competing in the Science Olympiad bottle rocket competition."

Boos, who says she plans to continue her education in fluid and heat transfer to the doctoral level, was homeschooled until her senior year of high school, so she says she was spared many of the early-age social pressures of thinking differently. But she says she feels them now.

"You feel a lot of pressure," says Boos. "If the average guy gets a B, you feel the pressure to get an A." For her, dealing with that is often all about being focused. "If you spend too much time focusing on all the challenges you have left and all the work you have yet to do it gets very overwhelming," she says. "To deal with that, I focus on getting through my work one day at a time."

"I think it starts pretty early on that girls are made fun of for being interested in rockets and planes and things that go boom," Parlett says.

"Yes, but I feel like from what I've seen, that all of that kind of thing starts pretty early on," Parlett continues. "I was made fun of in middle school for building rockets instead of going shopping or something that it was expected girls should be into."

Girls get Barbies and boys get Legos, they point out, and it doesn't ease up as those girls who choose to follow their intellects turn into young women who are unwilling to fit into traditional roles.

"That's where it all starts, it's how the kids are raised. I'd like to see a time when it's OK for girls to play with Legos as a child," Boos says. "I think it would be better if it were more acceptable for a girl to be into that stuff and just go out and help her dad work on the car or something like that.

"I feel like a lot of girls could be engineers but they weren't raised in an environment where they could be encouraged," she continues. "I think a big thing would be changing the image of engineering from 'Oh, it's a guy thing,' to realizing that girls can do it, too."

But do they feel that kind of pressure to fit a societal stereotype even now, even in college?

"Oh yeah," says Parlett, as Boos nods deeply. "There's that historical mindset that we are dealing with that goes way back, that somehow women shouldn't be doing this."

"Or that it's somehow unfeminine to do this, to become an engineer," says Parlett.

"In fact, just the other day we had this discussion," Boos says.

"We were talking about just how feminine can we dress and still be taken seriously, not just dismissed as two girls who are just so much into how they look?" says Parlett. "I don't really understand why that perception is there."

There were influential teachers along the way, but the major forces that made them into major forces are their parents, they agree.

"My dad has a master's in mechanical engineering and a professional license. He goes all over the world for Rain Bird," says Boos of her father, Mark. "About two weeks out of every month he's in another country. I keep getting all these emails about how nice the temperature is on the beach, which is really frustrating when it's about 45 degrees here!"

Boos also has the support of her mother, Debbie, who has a master's degree in music education. Her grandfather was an electrician-plumber, and she grew up helping her parents renovate every house the family lived in. The renovation projects involved her mother, father and sister Rebekah. She pitched in and did her part. "I've been working on construction projects since I was four," she says.

Parlett's parents, Steve and Lynda, consistently encouraged the young girl they saw out in the back yard looking at military planes, supporting their daughter as she blossomed into math and science and rocketry.

"My parents have always been big about education," Parlett says, "so I've got a great support network."

Both women are achievement oriented. Together they formed the Propulsion Research Center Student Association, of which Parlett is president and Boos is vice president.

In addition, Boos works for a West Virginia plastic processing company, designing machinery. "I'm basically a consultant for them, on my own time." It fits her desire to do design work for a subcontractor in the future. She's also working toward becoming the first woman at UAH to achieve a blue card that will provide her unlimited access to the 12,000 square feet of manufacturing tooling available to students in the Engineering Design and Prototyping Facility.

Both women feel strongly about mentoring the younger generation. Boos has tutored at Brookhaven Middle School in Decatur, one of Alabama's "failing" schools, in an effort to strike the educational spark in children. Parlett has been involved with UAH's Amateur Radio on the International Space Station (ARISS) outreach to young people and their teachers. She's also part of the Girls in Science and Engineering Day with NASA's University Student Launch Initiative.

"If you have the power to teach and to share and to spread interest in the field," Parlett says, "then you should."

"If you're in a situation where you've had people really reach out to you and help you in life," Boos says, "you have an obligation and a responsibility to be there and be that person for someone else."