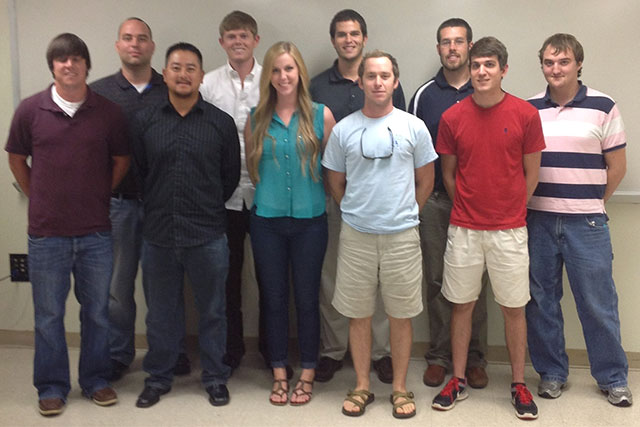 HUNTSVILLE, Ala. (April 16, 2014) – A 10-member team of capstone design students from The University of Alabama in Huntsville (UAH) has created a torpedo-like device with the goal of stopping suspect sailboats while they are under engine power by fouling their propellers.

Advised by Mechanical and Aerospace Engineering lecturer Dr. Christina Carmen and headed by team leader Dustin Coffman, the students are working on the Dept. of Defense project for the U.S. Special Operations Forces (USSOF). The project is made possible through the Stevens Institute of Technology (SIT) Systems Engineering Research Center (SERC).

"The U.S. Special Operations Forces (USSOF) have specific needs and, via the Stevens Institute of Technology Systems Engineering Research Center, the Dept. of Defense is able to specify their needs that, in turn, are made available to universities via Capstone design class projects," says Dr. Carmen. "It is always exciting to see what senior engineering students will create. They are not, in any way, inhibited in exploring unique solutions. It's an honor for UAH students to work on this project and aid the USSOF as they protect the security of our nation and our allies."

After a detailed design process, the UAH team devised the tubular device that can be dropped over the side of a pursuing boat or ship and guided by remote control to cross in front of the craft to be stopped.

"When we first started, we almost approached it with a James Bond approach. We initially designed a very complex device that had bladders and motors and a propulsion system," Coffman says. "The design we originally had would have taken us at least three years to develop and test."

"This was a complex project and I was immediately impressed by each team member, as they understood the challenges that they would face in the design of this disablement system," Dr. Carmen says. "They also knew that they had to fabricate a working prototype and present it to the USSOF, and that takes true dedication.

"The team initially wanted to design and build the underwater torpedo that would be launched from a vessel and be guided to the target, at which point the disablement system would be activated," she says. "However, that would have been far too complex for a senior design project. I do, however, give credit to my students for being ambitious and wanting to accomplish this grand endeavor. However, their budget was $5,000 and it would not have been realistic to design and build the entire system."

With that input from Dr. Carmen and a tight deadline for the project, the team analyzed their design for complexity and decided to focus on a portion of the device that involves a net deployment mechanism, leaving propulsion and guidance development to a future team.

The design starts with a main tube, inside which are three smaller tubes on top that contain floats and three on the bottom containing weights. The netting, made of an ultra-high molecular weight polyethylene called Dyneema, is located in the main tube between the top and bottom tubes.

As the 100 feet of net is deployed from the tube, the weights immediately sink and the floats rise, spreading it so it can wrap around and foul the propeller of the boat to be stopped.

The team has tested the net to be sure it floats properly and has pulled the assembled torpedo device to conduct a full-scale net deployment in water.

Besides the engineering challenge, Coffman says he learned a lot about teamwork.

"The most critical thing is communication," Coffman says. "Without clear communication, you can't expect your design to work well."

The UAH team's USSOF customer visited Huntsville last December and was pleased with their design.

The UAH team has been invited by the North Alabama American Society of Mechanical Engineers (ASME) section to be its guest speakers on May 7.

"The capstone design projects provided via SERC provide exceptional experience for our students here at UAH and we value our relationship with SIT SERC," Dr. Carmen says. "Affording students the opportunity to work with external customers and sponsors only accelerates their ability to do so when they are in the professional world."