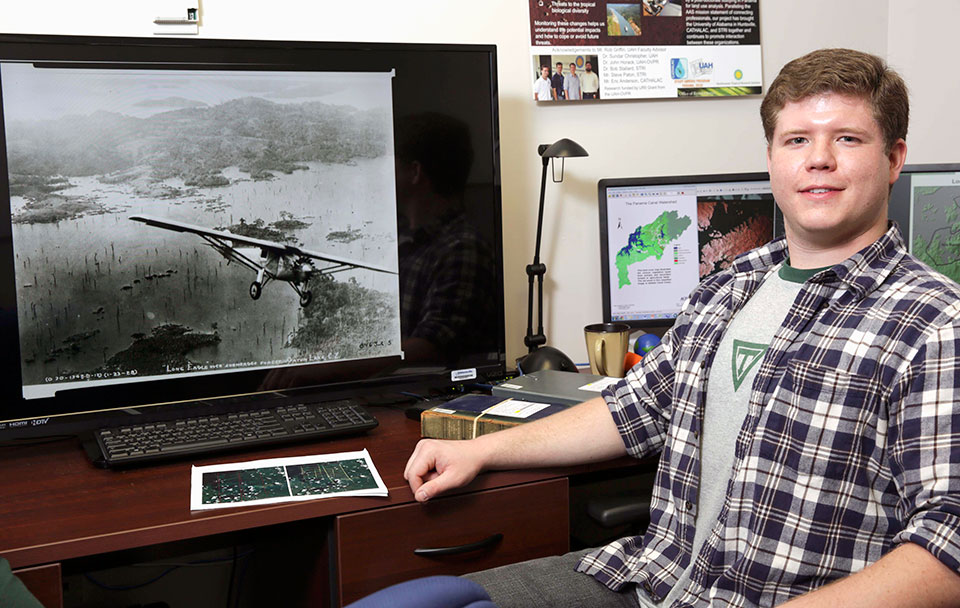 Earth system science graduate student Casey Calamaio has been using photos ranging from this one of Charles Lindbergh flying his Spirit of St. Louis over the Panama Canal Zone to images taken from space to compare forest cover from the 1920s to the present.
Michael Mercier | UAH

HUNTSVILLE, Ala. (March 3, 2014) – A University of Alabama in Huntsville (UAH) student's innovative research on forest cover in Panama has been selected for the Council on Undergraduate Research's Posters on the Hill session April 28 and 29 at the U.S. Capitol Building in Washington, D.C.

Now a UAH graduate student, as an undergraduate Casey Calamaio applied to the geosciences division of the poster competition and conducted his research on rates of Panama Canal Zone forestation from the 1920s to the present. He is only the third student from Alabama to make the trip in the past nine years.

Surprisingly, there is more forest cover in the Panama Canal Zone today than there was in the 1920s, Calamaio's research finds.

"Most of that forest is secondary growth, but the cover is more dense now," he says, a finding that he attributes to the Panamanian government's reforestation and conservation efforts since the 1970s. "In the older images from the 1920s through the 1950s, what you see are basically a lot of cleared areas."

The regrowth of forest has a direct impact on biodiversity in an area that is considered one of the world's diversity hotspots.

"Panama is such a dynamic area, with all the shipping and the changes that have come with the canal," Calamaio says, "and it is also an isthmus that serves as the link between North and South America to serve as a conduit for plants and animals."

In the Canal Zone, deep valleys and crevices have been flooded for the Panama Canal and areas that once were mountain peaks are now the visible landmass. Protecting the ecosystem there is important to Alabama, as well, because the vast majority of the state's shipping traffic from Mobile's ports passes through the canal to reach global markets.

Calamaio's continuing graduate research into Panamanian forests is supported by SERVIR – a joint initiative of NASA and USAID, working in partnership with leading regional organizations around the globe, to help developing countries most in need of cutting edge climate risk and sustainable forest management information provided by Earth-observing satellites and geospatial technologies.

This is really an opportunity for the Council on Undergraduate Research to show members of Congress and our other government representatives in Washington the kinds of undergraduate research that are being done in a variety of sciences. It's an honor to have been chosen.

Advised by Dr. Rob Griffin, assistant professor of atmospheric science, Calamaio is pursuing his master's degree in Earth system science. He says he expects to meet with senators and representatives from Alabama, the Southeast and nationally when he travels to the event.

"This is really an opportunity for the Council on Undergraduate Research to show members of Congress and our other government representatives in Washington the kinds of undergraduate research that are being done in a variety of sciences," Calamaio says. "It's an honor to have been chosen."

Calamaio's research examines a range of images of the study area over a more than 90-year span to compare the forest cover.

"What we're doing is observing the Panama Canal Zone region through the 20th century using Smithsonian Institution aerial photos and also satellite imagery taken from LANDSAT back in the 1970s up to now," Calamaio says. The photographs were taken from the 1920s through 1983. Many of the earliest photos were made by the renowned pilot Charles Lindbergh.

"We're also using images from the International Space Station SERVIR Environmental Research and Visualization System, or ISERV, which is a test-bed camera aboard the International Space Station," Calamaio says. His graduate work includes processing imagery from the ISS and tasking the cameras aboard it to produce additional pictures for study. In addition to ISERV, Calamaio is using other NASA satellites including historic and contemporary Landsat Thematic Mapper, Enhanced Thematic Mapper and the new Landsat 8 Operational Land Imager to support his research.

Calamaio's research started in 2010 while he was in Panama as part of UAH's research and study abroad program focusing on Climate Change and Sustainable Development in Latin America and the Caribbean. The UAH Office of the Vice President for Research funded Calamaio's research at the archives of the Smithsonian's Tropical Resource Institute, where he digitized the older photos taken in the Canal Zone.

"In 2010 we looked within the Canal Zone at protected areas and digitized the forested versus the non-forested areas," Calamaio says, and it was during that process that he and Dr. Griffin noticed the large areas of clear-cut land and wondered how they were affected over the subsequent decades.