UAH student invited to be guest lecturer at Space-X 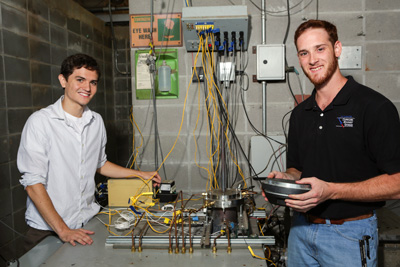 HUNTSVILLE, Ala. (Sept. 19, 2013) - The same type of white noise you hear from a TV set, properly applied, could prevent a rocketry catastrophe.

That's attracted the interest of Space-X to a University of Alabama in Huntsville (UAH) graduate student's innovative new approach to suppressing combustion instabilities in rocket engines.

John Bennewitz, a Von Braun Propulsion Scholar at the UAH Propulsion Research Center who is working with advisor Dr. Robert Frederick, will be a visiting lecturer at Space-X's facility in Hawthorne, Calif., on Friday, Sept. 27, where he will tell employees of the firm that designs, manufactures and launches advanced rockets and spacecraft about his efforts in applying band-limited white noise to neutralize combustion instabilities.

"For me it was very interesting," Bennewitz said, "because now I can tell people it really is worth it to go to these conferences to network with professionals in the industry and get opportunities, such as presenting my research at Space-X."

Combustion instabilities are a wave of bad news for rocket designers. Instabilities can occur due to a feedback between unsteady heat release, acoustic fluctuations and incoming propellant flow perturbations.

"What can happen is, when you have rough combustion with these instabilities excited at certain frequencies, the oscillations can get so large with amplitudes so great that it destroys the engine," Bennewitz said. "Combustion instability is one of the largest issues with rocket engine development and design."

Prior efforts to control combustion instabilities have focused largely on designing the engine baffles and injectors to smooth propulsion flows at critical points. Recently, researchers tested a Fast-Response Actuating Valve to deliver propellant to the engine's combustion chamber modulated at certain frequencies to nullify instabilities. They found that approach worked in a set of narrow, targeted frequency ranges.

That research intrigued Bennewitz, who proposed using a piezoelectric speaker located upstream of the combustion chamber, housed at the base of the oxidizer post of an injector, to broadcast white noise frequencies targeted to negate the instabilities. He theorized that a broader approach would be more effective.

"With a speaker, the band-limited white noise being generated is basically a package of frequencies," he said.

Combustion instability is one of the largest issues with rocket engine development and design.

Bennewitz designed a model liquid rocket engine combustor and fabricated it with the help of senior aerospace student Jake Cranford. By experimenting with a gaseous methane/gaseous oxygen fuel mixture, the two found a productive sweet spot, which suppressed a 2,400 Hz instability by applying band-limited white noise between 500 Hz and 1,000 Hz.

"When these combustion instabilities get excited, they do so at a specific frequency," he said. "Essentially, we are sweeping right now from zero to 2,500 Hertz (Hz). We sent it 500 frequencies at a time, beginning with 0 Hz all the way up to 2,500 Hz, in increments of 100 Hz and then back down again."

Cranford, who was responsible for some design changes to the test stand, said getting such experience has been valuable. "As an undergraduate, I've been working with John and he's been very forthcoming with the science," Cranford said. The experience has piqued his interest in attending graduate school at UAH.

Next up for the pair is testing narrower frequency bands to identify the most effective ranges for instability suppression. They are now applying 150 Hz ranges to more precisely isolate the best frequencies.

Cranford is working on another part of the project, a system that will sense pressure oscillations and be able to offset them with a signal from the speaker through a band pass filter and time delay, working in similar fashion to anti-knock sensors in cars. That development would provide greater in-flight adaptability to conditions, making the concept useful across a much broader range.

"The hope is that if we can get the filter up and working," Bennewitz said, "then Jake can be the primary author of a conference paper about it."