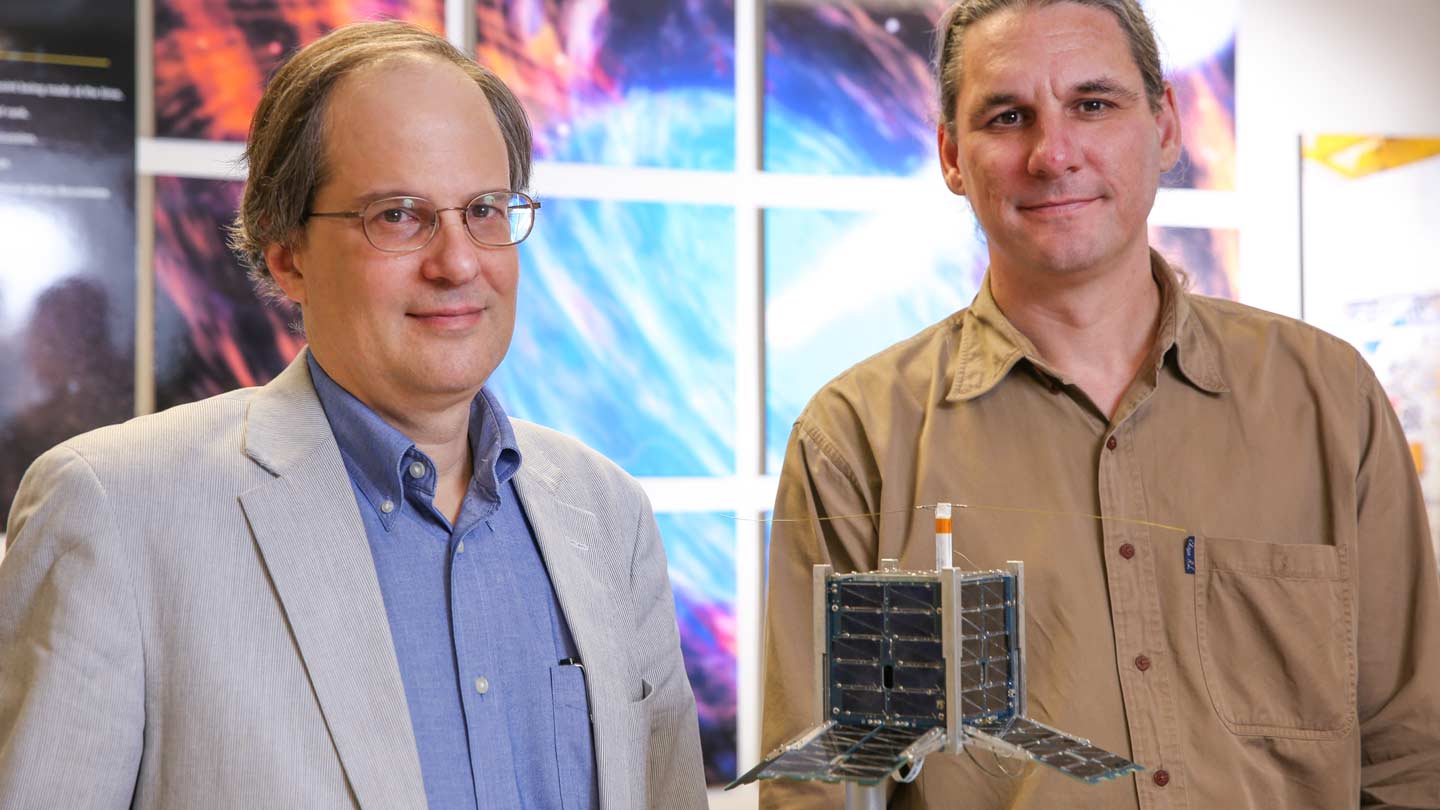 UAH is the lead institution in the Terrestrial RaYs Analysis and Detection (TRYAD) mission, which will send two class 3U cube satellites into orbit that are three times longer than the class 1U Charger-1 cubesat that’s between Dr. Michael Briggs, left, and Dr. Peter Jenke. In 2013, the UAH Space Hardware Club flew a twin of the Charger-1 shown.

University of Alabama in Huntsville (UAH) researchers are heading into space in 2018 to measure and better understand terrestrial gamma ray flashes (TGFs) that originate from thunderstorms, a project that will bring hands-on experience to UAH's undergraduates.

In the Terrestrial RaYs Analysis and Detection (TRYAD) mission, two 10 x 10 x 30-centimeter, class 3U cube satellites - or cubesats - will launch as a secondary payload on a large rocket into a 40-degree inclination orbit 400-500 kilometers above Earth, circling in the thin outer atmosphere.

The orbital goal is to spend as much time over the tropics and tropical land as possible, since most thunderstorm activity occurs at the equator. The inclined orbit is necessary so that the satellites will fly over North America to transmit data.

One thing we’d like to know is, how does a thunderstorm manage to accelerate these particles to extreme energies in order to create the gamma rays?

Working with a ground-based observation center, the satellites will triangulate to measure by intensity the beams created by the rapid formation of TGFs.

"If we're in the center of the beam we'll get a lot of rays," says Dr. Michael Briggs, the assistant director of UAH's Center for Space Plasma and Aeronomic Research (CSPAR) and principal research scientist who is the principal investigator for the experiment, funded by a $893,874 grant from the National Science Foundation. "If we're farther out, we'll get fewer."

Data will be sent to Earth using the NASA Near-Earth Network of dishes through a high-bandwidth PULSAR onboard radio with X-band downlink provided by NASA's Marshall Space Flight Center.

UAH is responsible for the science instruments, science operations, data distribution, analysis and results publication, and is the lead institution for the four-year TRYAD effort. The UAH portion of the grant is $376,687. Collaborator Auburn University and Dr. J-M Wersinger, an Auburn professor emeritus in the physics of remote sensing, will develop, integrate and test the two cubesats, interface them with the launch provider and control the two satellites in space.

The grant provides for three years of development work, followed by a year of flight time.

"Terrestrial gamma ray flashes were discovered in Huntsville in the 1990s by the BATSE flight - the Burst and Transient Source Experiment," says Dr. Briggs. "They have since been observed by several instruments, including the current observation instrument that UAH is involved in, the Gamma-ray Burst Monitor."

The project's co-principal investigator, Dr. Peter Jenke, an astronomer and UAH research associate, designed and modeled the TGF detector concept that was used in the grant application.

"We proved that we can actually do the science we set out to do in a series of modeling experiments," Dr. Jenke says. UAH will design, test and construct the gamma ray detector that will fly.

"One of the goals of the project is to bring undergraduates face-to-face with real technologies, and not just book learning," says Dr. Briggs, who in 2013 was one of a trio of UAH researchers who observed the largest gamma ray burst ever seen, which originated when a far-away star collapsed. 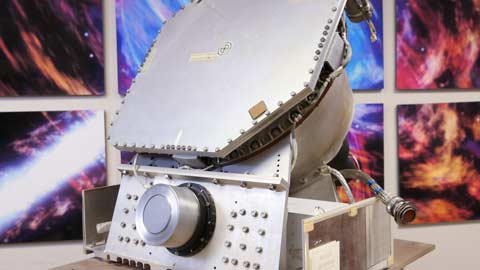 Dr. Briggs and Dr. Jenke will teach a spring semester class at UAH in space hardware development for undergraduates and graduate students that will have the project as one of its focuses.

The research could reveal new information about TGF generation.

"Gamma ray flashes are sub-millisecond, extremely intense flashes generated by thunderstorms," Dr. Briggs says. "One thing we'd like to know is, how does a thunderstorm manage to accelerate these particles to extreme energies in order to create the gamma rays?"

Scientists could also gain new insights into how the electrical charges in thunderstorms work.

"I think it's going to tell us more about the electrical fields that are present in storms," says Dr. Jenke. "Electrical fields in thunderstorms are very difficult to measure. These TGFs can give us an indicator of the strength of these fields."

Researchers are hopeful the data will add clarity to the scientific debate about how TGFs form.

"There are some competing models of TGFs and how they arise," Dr. Jenke says, "so hopefully this research can eliminate some of these models."