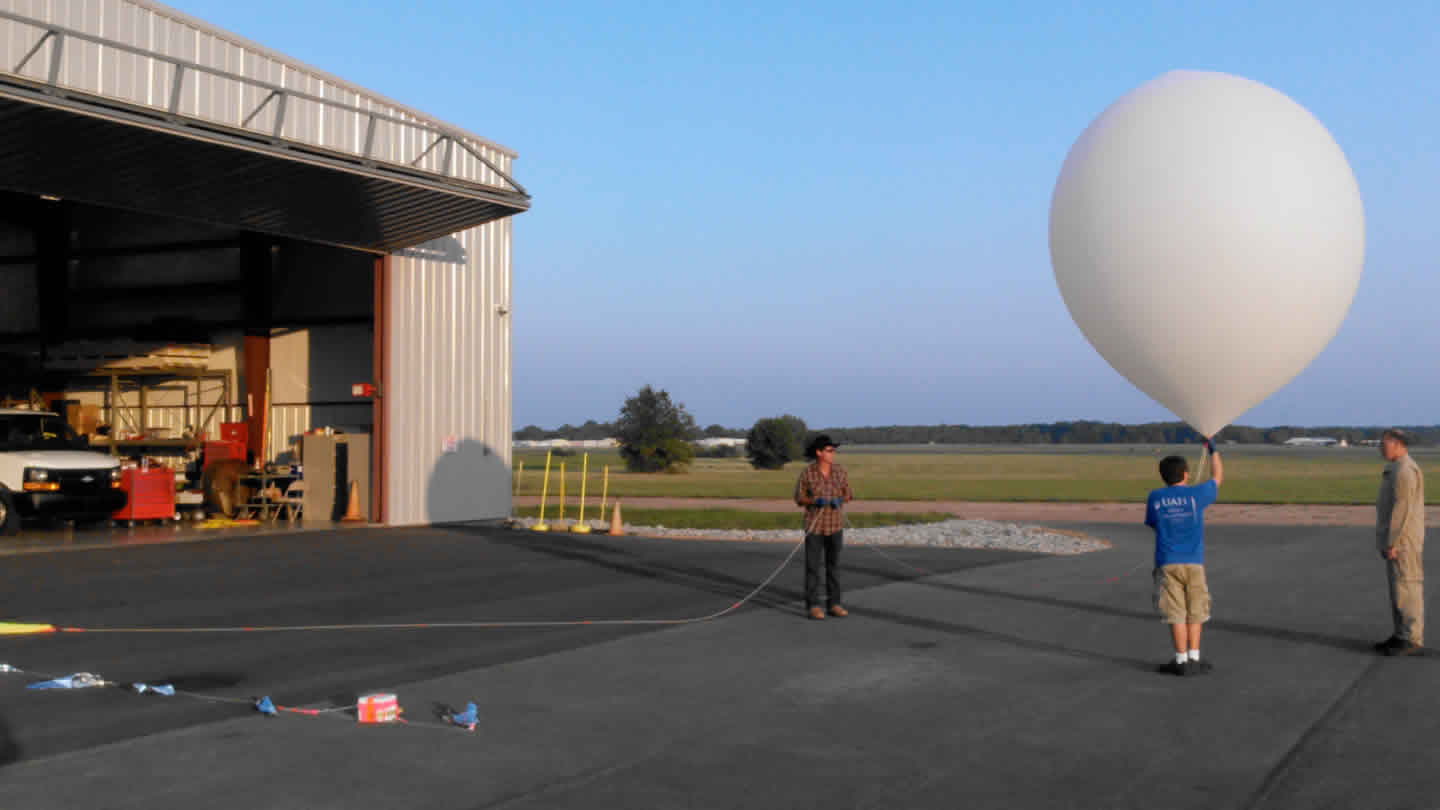 Matt Rodencal, center, gets ready to release a test balloon to be tracked at Tullahoma, Tenn., as Doug Huie and pilot Jim Wright look on.

HUNTSVILLE, Ala. (Aug. 11, 2014) - A graduate student at The University of Alabama in Huntsville (UAH) and also a scientist and an engineer from UAH are on the way to Canada to help calibrate a prototype cosmic ray telescope that has a 2017 International Space Station flight goal.

Center for Space Plasma and Aeronomic Research (CSPAR) graduate student Matthew Rodencal, Douglass Huie of the Rotorcraft Systems Engineering and Simulation Center (RSESC) and Dr. James Adams of CSPAR will use a graphical tracking system developed at UAH to position a helicopter directly under a stratospheric balloon carrying the a prototype of the Extreme Universe Space Observatory (EUSO) telescope on a moonless night over a remote area of Ontario Province, Canada.

EUSO is being developed for a flight on the International Space Station to record the luminous tracks left by extremely energetic cosmic rays when they strike the Earth's atmosphere.

Currently, there are two EUSO prototypes. One is the ground-based prototype located at Telescope Array (EUSO-TA) experiment in Utah and the other is Balloon EUSO, the telescope to be flown this month on a stratospheric balloon at an altitude of approximately 120,000 feet. The UAH researchers are part of a team that will be calibrating Balloon EUSO during its flight over Canada.

The Global Light System (GLS) is being developed by UAH in collaboration with Marshall Space Flight Center (MSFC) and the Colorado School of Mines. UAH is contributing a xenon flash lamp and a light emitting diode flasher, both operating in the ultraviolet. The plan is to position these GLS units on high mountains around the Earth as ground calibration light sources for EUSO when it is flying on the space station. 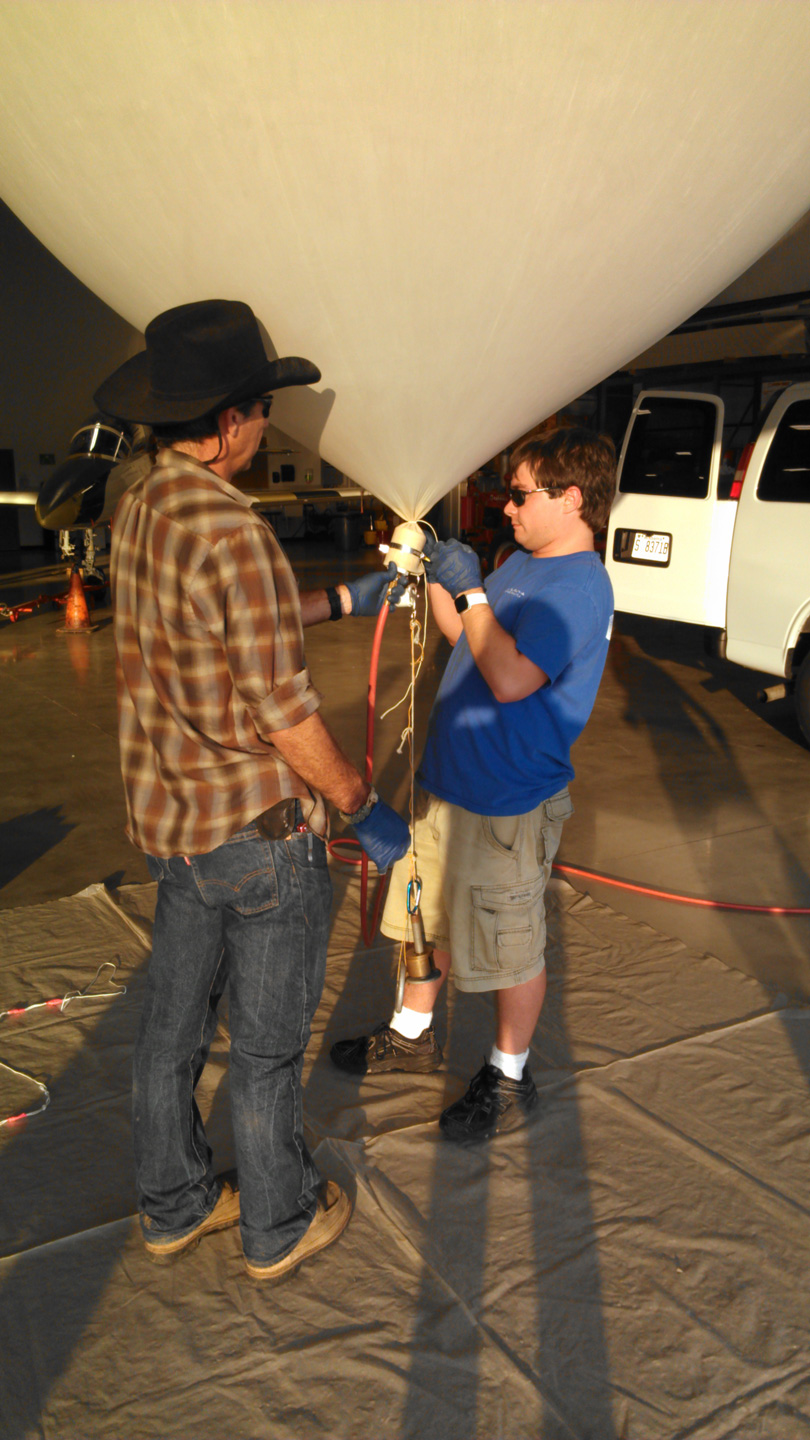 Using the UAH-designed tracking device, Rodencal will assist the helicopter pilot to find the balloon and fly directly under it so that researchers from UAH and the Colorado School of Mines (CSM) are positioned within the field of view of the prototype EUSO telescope. Then they'll use the flashers developed in CSPAR at UAH by Evgueni Kuznetsov and his student, Jurgen Sawatzki, and a laser-based calibration system developed by CSM to mimic the light from extremely energetic cosmic rays striking the Earth's atmosphere.

The calibration instruments will duplicate fluorescent flashes produced by cosmic rays striking the atmosphere. UAH's flashers simulate the light seen from a few-thousand-foot segment of a track caused by a cosmic ray coming straight down from space, while the CSM laser simulates the track of a cosmic ray traveling horizontally through the atmosphere.

"After the balloon is launched and gets to the correct altitude," Rodencal says, "we are going to get underneath it in the helicopter retrofitted with both the UAH flashers and the high-powered laser and fire calibration pulses so that they can be recorded by the instrument on the balloon."

The idea is to get the helicopter inside the field of view of the EUSO prototype that is looking down from the helicopter and then flash the flashers and fire the laser so the flashes can be recorded by the video camera, says Dr. Adams.

The balloon will be launched from Timmins, Ontario, Canada, while the tracking and calibration helicopter will begin its mission from Ottawa.

"The balloon will fly west toward Thunder Bay," Dr. Adams says. "We hope it will stay north of the border. The flight will last at least six hours beginning just before dark. If it stays far enough north, maybe it will fly until dawn."

The UAH-CSM scientists have been practicing flying a helicopter under a balloon around Tullahoma, Tenn. Their last practice flight was last week.