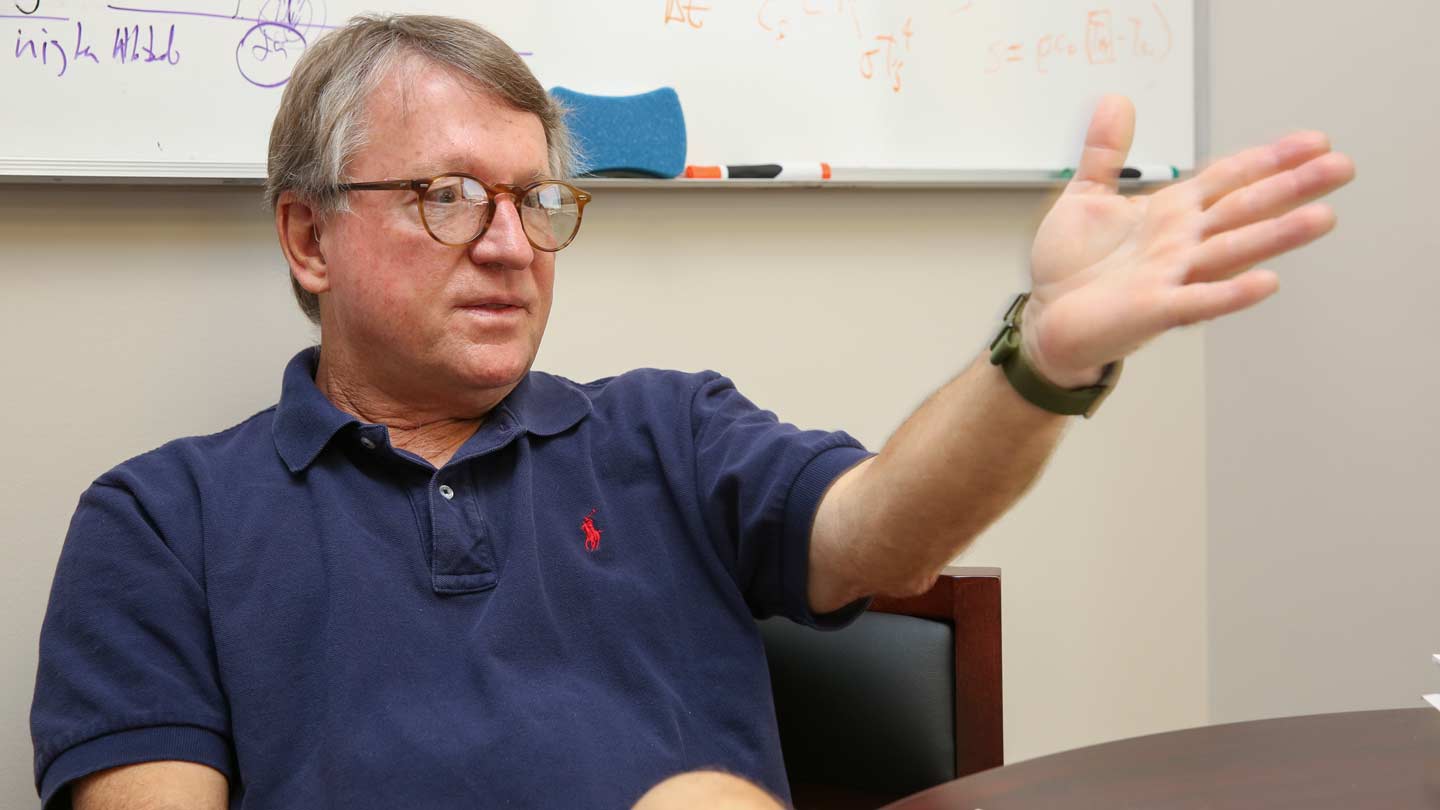 Dr. Richard McNider is the principal investigator for a National Science Foundation grant funding an Oct. 21-23 workshop in Boulder, Colo., to explore how the U.S. might plan for more sustainable agricultural production.

Is the way the United States raises its food sustainable and reliable for our future?

Agricultural migration and how the United States might plan for more sustainable food production will be the topics of an Oct. 21-23 workshop in Boulder, Colo., being planned by researchers from The University of Alabama in Huntsville (UAH) and their collaborators at the National Center for Atmospheric Research (NCAR) in a attempt to answer that question.

Funded by a $56,335 grant from the National Science Foundation, the workshop will draw together hydrologists, agronomists, economists, climatologists, ecologists, energy experts, and water resource planners from UAH, the NCAR, the University of Colorado Boulder, Colorado State University and other national institutions and universities to discuss past patterns of crop production migration in the U.S., their affect on the environment and sustainability and how national policies could be implemented to increase the sustainability of our food and fiber production.

At this workshop we want to ask, is this new geography sustainable in terms of economics and the impacts on our water resources, in terms of water quantity and water quality?

"In the last 50 to 60 years, there has really been a rapid change in where agriculture takes place in our nation," says Dr. Richard McNider, a distinguished professor of science at UAH's Earth System Science Center (ESSC), who was the principal investigator for the NSF grant along with co-investigators Dr. James Cruise and Dr. Maurice Estes, both researchers at the ESSC. "At this workshop we want to ask, is this new geography sustainable in terms of economics and the impacts on our water resources, in terms of water quantity and water quality?"

This geography of agricultural production has also changed energy consumption through electrical energy used to move surface water in the West and to pump water in the High Plains. It has created the need for transportation energy to move refrigerated food from the West to the East and grains from the Midwest to the Southeast for consumption by poultry and swine. On the other hand, a new migration of agriculture back to the East and Southeast may increase competition for water for cooling in thermoelectric generation and cause hydroelectric losses.

"By our migrating and concentrating various segments of agricultural production in certain regions of the country, it did provide us with a lot of economies of scale and a lot of quality food, but is it sustainable?" Dr. McNider asks.

Researchers at the workshop will be trying to answer some fundamental questions:

"We believe that these more recent changes in agricultural production in the U.S. have made it more vulnerable," says Dr. McNider. "For example, a two-year Midwest drought could have a devastating effect on our grain production. You never want to have all your eggs in one basket."

Potential trouble spots include intensively irrigated arid areas in the middle section of the country that draw from aquifers that cannot easily be recharged and some types of agriculture practiced in California, where 50 percent of groundwater has been lost in recent dry conditions that climatologists think may be more the norm than conditions in the recent past, Dr. McNider says.

That suggests that bringing a portion of grain, cotton and vegetable production to the East and Southeast may be more economically feasible and a more sustainable long-term proposition, something that the workshop will explore.

"Can we actually produce national maps that show where agricultural production of certain crops is not only economically feasible, but also environmentally sustainable?" Dr. McNider asks.

Putting a comprehensive plan into action would require building surface water infrastructure east of the Mississippi River to support irrigation and federal government policies designed to spread agricultural diversity over more of the country, he says.

"The West is gong to continue to ask for federal dollars for dams and projects to shore up agriculture there," Dr. McNider says. "But could it be a better investment for the federal government to use that money to build up an infrastructure in the East?"

Increased growing season use of surface water from reservoirs that capture water during rainy winters could smooth out the feast-or-famine water patterns typically experienced by farmers in the Southeast who do not use irrigation.

"With the surface water resources we have in Alabama alone we feel that we could support a more than a million irrigated acres, and right now we irrigate about 100,000," he says. "Maybe we should actually think about moving some agricultural production to areas where it is more sustainable."