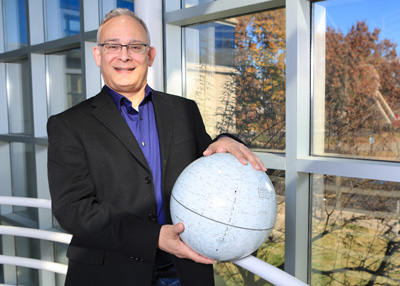 Dr. Richard Miller is leading a team effort to apply new techniques to data analyses to better characterize the hydrogen at the lunar poles and map its spatial distribution.
Michael Mercier | UAH

HUNTSVILLE, Ala. (Nov. 13, 2013) - One of the things Dr. Richard Miller thinks is coolest about working as part of a team investigating the origin and mapping of water on the lunar poles is that he can look up at night or when the moon rises during the day and see the object of his research.

Making a visual connection with his subject is usually not an option for the professor at The University of Alabama in Huntsville (UAH), who specializes in high-energy astrophysics. Now, after having been part of the discovery of surface water at Shackleton Crater at the moon's south pole, Dr. Miller finds himself on a team investigating questions that have been raised by that discovery.

"I remember as a little kid watching the Apollo missions to the moon and the lunar landings," he said. "As a little kid, I watched and daydreamed about this, and then through a series of almost random events in life to find myself working as a part of the team on this is really pretty awesome."

Dr. Miller is associated with the work being done on lunar mapping by the Johns Hopkins University Applied Physics Lab, which leads the Volatiles, Regolith and Thermal Investigations Consortium for Exploration and Science (VORTICES) as part of NASA's Solar System Exploration Research Virtual Institute (SSERVI).

A NASA "virtual research institute" composed of nine lead research teams from seven states based and managed at NASA's Ames Research Center at Moffett Field, Calif., SSERVI "takes what was done in NASA's Lunar Sciences Institute and expands it to the solar system as a whole," said Dr. Miller.

VORTICES brings together scientific expertise across a broad range of disciplines. In addition to UAH, other collaborating institutions include NASA Goddard Space Flight Center, the Jet Propulsion Laboratory, the Georgia Institute of Technology, the Lunar and Planetary Institute, Mt. Holyoke College, Johns Hopkins University, the University of Alaska, the University of Hawaii and the University of Maine.

Now we’ve moved beyond simple detection to ask, what is the lunar water cycle? We’re bringing together all these data sets to determine what is going on at the poles of the moon.

The five-year effort is focused on a deeper understanding of regolith, or soil, and volatiles - including water and hydroxide - on airless planetary bodies like the moon, asteroids and other bodies in the solar system.

"My particular component of the effort builds upon the previous work I've done identifying lunar water resources at the moon's poles, including the first detection of lunar surface water within Shackleton Crater," Dr.Miller said. "I have received great support and encouragement from the entire Johns Hopkins team."

Some scientists think Shackleton's formations make a unique place for water collection from elsewhere, with high peaks around the rim that are exposed to near continual sunlight to invite volatile molecules and a deep and cold floor shrouded in darkness to hold and freeze them so they can't escape.

The crater lies very close to the moon's south pole and is approximately 20 kilometers in diameter and over 4 kilometers deep with steep sloping. Near Shackleton are other craters, and scientists are curious about whether Shackleton is truly special and unique in its endowment of surface water or if other craters may also hold volatiles.

Dr. Miller is leading a team effort to apply new techniques to data analyses from the past and to new data being collected currently, in order to better characterize the hydrogen at the lunar poles and map its spatial distribution. Hydrogen is a marker for water.

"That's what's exciting about this surface deposit at Shackleton Crater," said Dr. Miller. "It suggests there may be an easier way to get the material out" than to mine for it at depths of 1 meter or more, where other lunar water deposits have been found to reside.

"If you look at the water at the rest of the lunar poles, what makes this crater special? Is this really the only region that has water at the surface?" Dr. Miller asks.

Scientists are trying to understand how the water discovered so close to the surface at Shackleton Crater got there. Did it fly in on a comet or an asteroid? Could it have migrated there as part of a lunar water cycle? Or is there some other mechanism or combination of mechanisms involved?

"If most of the water broadly distributed across the lunar poles is buried, then what that says is that it may have been deposited episodically rather than continuously. Migration to the permanently shadowed regions at the poles from other areas of the moon may also play a role. Those craters at the lunar poles are so cold that once the water molecule dives into those craters, it freezes and doesn't leave," Dr. Miller said.

"We need to do more research to find out. Now we've moved beyond simple detection to ask, what is the lunar water cycle? We're bringing together all these data sets to determine what is going on at the poles of the moon."

VORTICES will fill important knowledge gaps that will ultimately enable additional human exploration of the moon, asteroids and the Martian moons, identification of resources, as well as a deeper scientific understanding of Earth's nearest cosmic neighbors. Lunar mapping work will include the abundance of water and some information on its depth distribution.

"My piece builds on the work my colleagues and I have done previously," Dr. Miller said. "I will be leveraging those discoveries to expand our understanding of the lunar water cycle, including the abundance, spatial and depth distributions of lunar hydrogen. The new detection and mapping techniques developed here will be extended to include new information such as elemental abundances via nuclear gamma-ray techniques, as well as topographical, temperature and albedo - optical, IR and UV reflection - measurements."

The analysis techniques and processes developed by the over 30 researchers on the VORTICES teams can be applied to water mapping on asteroids, other moons and planets. Work being done by all the SSERVI teams could also point scientists in new directions.

"All of the nine SSERVI teams selected are multi-institutional scientific collaborations," said Dr. Miller. "The work we do, or other teams do, may ultimately inform future space missions."