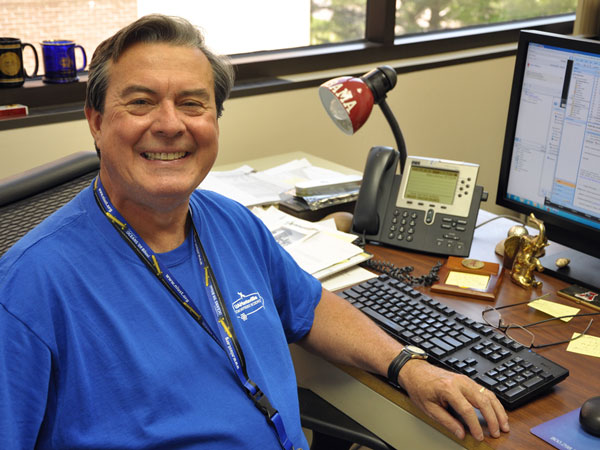 HUNTSVILLE, Ala. (May 15, 2014) - You can't see a tuna from outer space, but that isn't stopping NASA and The University of Alabama in Huntsville (UAH) from lending a hand in efforts to protect tuna and their tiny larvae in the Gulf of Mexico.

Maury Estes, a research scientist in UAH's Earth System Science Center, is spending more than a week aboard the research ship F.G. Walton Smith prowling the gulf between Florida and Texas with a team of scientists led by NOAA's Dr. John Lamkin who want to know more about where Atlantic bluefin tuna spawn and other details of their private tuna lives.

While he is onboard, Estes works 12-hour shifts, seven days a week, hauling in fine mesh nets filled with plankton, then sifting through that plankton to see if it includes tuna larvae, how many there are and other physical characteristics. He also documents how the team uses data provided by NASA satellites to pinpoint the best places to find infant tuna hiding among the krill.

Then, when the tuna (and other billfish species, such as blue marlin) larvae are counted, the nets are stowed and the dishes are cleared, Estes writes a blog that includes interviews with members of the scientific team, photos and video of the crew's activities, and tidbits about life aboard a research vessel at sea. To read about Estes' adventures, go to http://www.nasa.gov/centers/marshall/news/earth-science-travelogue.html.

"I hope to interview the captain and research crew, so I can learn more about how they're using remote sensing data to support larvae field sampling," said Estes, the associate program manager for the ecological forecasting program led by Woody Turner, which is part of NASA's Applied Sciences program. "And I really want to capture shipboard operations, how everything works and life aboard the ship."

Estes met the ship, which is based in Miami, Monday when it docked in Galveston, Texas, and will disembark next week in Gulfport, Miss.

"NOAA samples in the spring for Atlantic bluefin tuna and other billfish larvae, to better understand their spawning patterns," Estes said. "These cold-water tuna are very migratory and come down from colder water into the Caribbean and the Gulf of Mexico to spawn.

"NOAA wants to gain a better understanding of their life cycle so they can better manage the population. Satellite data is being used for model inputs and analysis of environmental conditions to better understand the tuna spawning and life cycle."

NOAA is the major end user in this applied science project, funded by NASA, which is led by Dr. Mitchell Roffer with Roffers Ocean Forecasting and Fishing Service in Melbourne, Fla.

The NOAA survey program has previously surveyed other parts of the Gulf, the Caribbean and the Atlantic Gulf Stream.