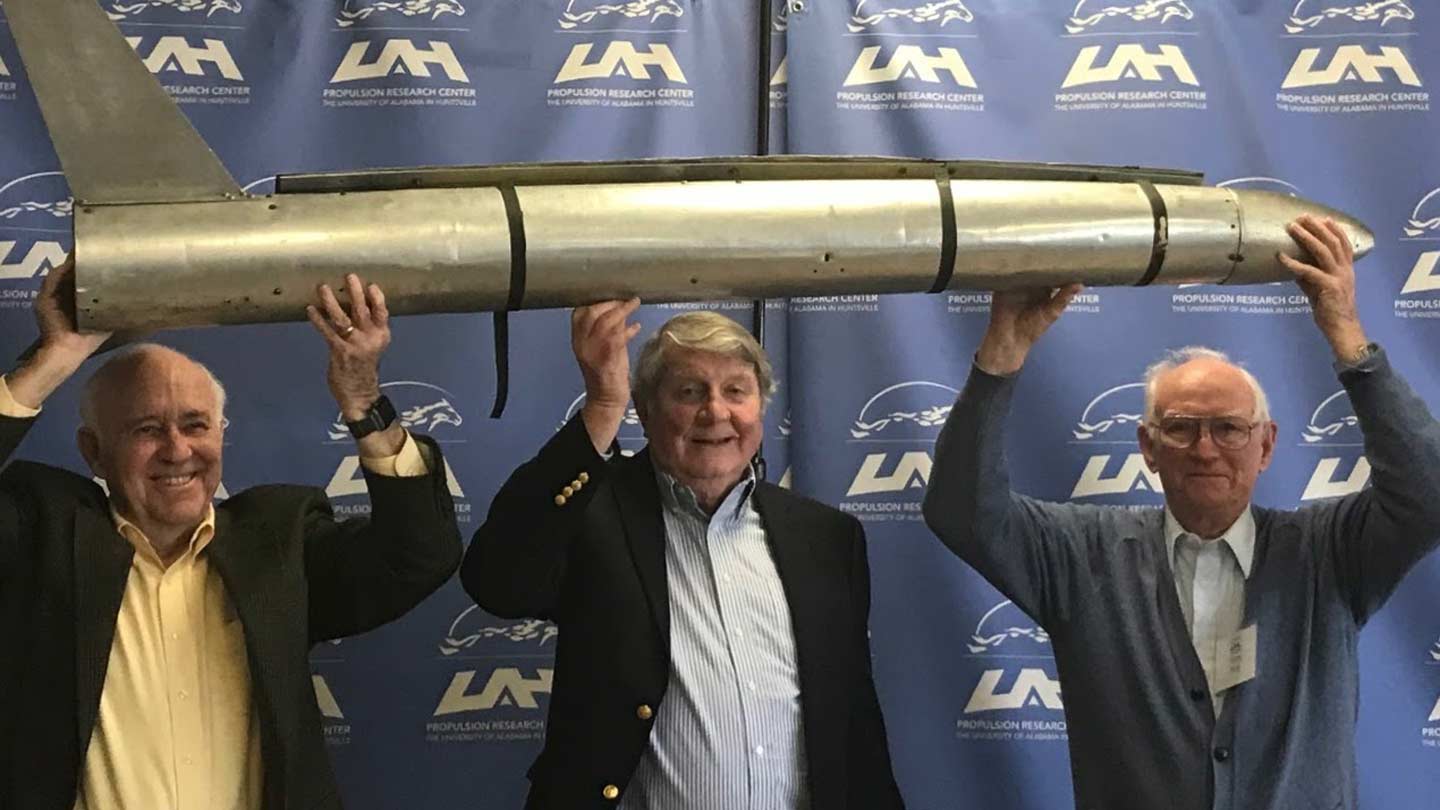 Bill Snoddy, Dr. Robert Naumann, and Harry Reid pose with a replica of Explorer 1, the satellite that would launch the U.S. into the Space Race and the careers of these three men.

High school junior Anna Frederick’s research project on the historic Explorer 1 satellite culminated in her meeting Bill Snoddy, Harry Reid, and Dr. Robert Naumann, three of the pioneering minds behind the project. Anna’s father, Dr. Robert Frederick, realized after reading over her paper that the 60th anniversary of Explorer 1’s launch was approaching and, as director of the Propulsion Research Center (PRC) at The University of Alabama in Huntsville (UAH), decided to hold a celebration of the anniversary. The PRC, which focuses on conducting research on propulsion systems and mentoring students in propulsion technology, welcomed scientists, students, and members of the Huntsville community alike to remember the United States’ entry into the Space Race.

The year 1957 was a frustrating one for American aerospace scientists, as the Soviet Union had launched two satellites whereas the United States government had only managed to destroy its first spacecraft upon launch. Enter Dr. Wernher von Braun, German emigre and patron scientist of Rocket City. Dr. von Braun and his team developed the Juno I rocket to carry the Explorer 1 satellite, which would conduct cosmic research while orbiting around the Earth at a distance as great as 1,563 miles. The satellite’s batteries would die two months past its launch date of Jan. 31, 1958, but Explorer 1’s use was not yet exhausted. Prior to its launch, U.S. politicians were concerned that the nation was falling behind in the Space Race, becoming second to the Soviet Union. After the mission’s success, lawmakers regained confidence in our ability to achieve greatness in space. Six months later, NASA was officially established, in part because of the successes of Dr. von Braun and his team.

You helped us to understand not only the technical challenges of that project, but also the political and leadership facets of that time in history.

Attendees gathered together to hear original members of Dr. von Braun’s team recollect their time working on the Explorer 1 project. Anna Frederick began by summarizing the events surrounding the Explorer 1’s deployment. Bill Snoddy, who spoke next, joined the rocket research and development team at Redstone Arsenal in 1958 after graduating with a bachelor’s degree from the University of Alabama (UA). He recalls watching Sputnik pass across the sky, remembering that “near Denny stadium there was a big cemetery. I’m sure it’s still there. My roommate and I went out, stood in the middle of the cemetery…and we saw that sucker go over.” Laughing, Snoddy describes this event as “the best thing that ever happened to our space program,” implying that the Soviet Union’s success catalyzed the government’s efforts to put man-made objects into space. Although Snoddy arrived at the Redstone Arsenal too late to assist in the launch, he did work with Dr. von Braun’s team to resolve an unexpected issue with the satellite. Explorer 1 had begun to change the axis of its rotation, which the team discovered was due to the tendency of bodies to adopt a rotation that uses the least amount of kinetic energy. This discovery added to scientists’ knowledge regarding Eulerian rotation. Snoddy was also present for the historic moment when the project’s principal investigator James Van Allen received extremely high readings of cosmic energy from Explorer 1, which led to Van Allen’s assertion that the readings were caused by particles stuck in the Earth’s magnetic field and the naming of the Van Allen belts. Snoddy would go on to work for NASA and receive a graduate degree from UAH in administrative sciences. 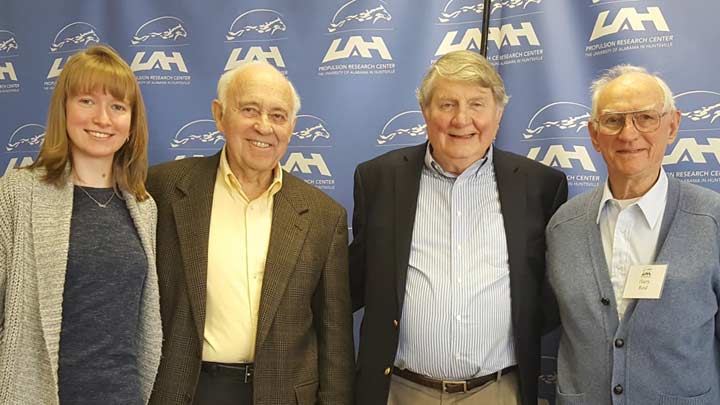 Anna Frederick poses with Bill Snoddy, Dr. Robert Naumann, and Harry Reid, who worked on the satellite that served as the subject for her high school research paper.

Dr. Robert “Bob” Naumann opened his presentation with his memories of hearing about the atomic bomb and Dr. von Braun’s rockets at the age of 10, deciding at even that early age that the areas of rocketry and nuclear physics would be his fields of study. After graduating from UA, Dr. Naumann joined the Explorer 1 project and was given the freedom to research anything pertaining to the mission. Realizing the lack of research regarding meteorites, he built an experiment that would fly on Explorer 1 comprising a small microphone attached to the skin of the satellite that would register meteorite impacts. After his time with the project was over, Dr. Naumann would go on to work at NASA for 30 years, as well as teach at UAH in the material sciences program from 1990 to 2008. Reflecting back on his Explorer 1 experience, Dr. Naumann says that it “was the start of a very, very exciting career, and I just enjoyed every bit of it. I wouldn’t do anything different.”

Harry Reid, who accompanied Snoddy to the luncheon, was a surprise speaker. He served as a guidance-system expert who developed a system including gyroscopes that helped guide the Redstone missile that delivered the Explorer 1 satellite into orbit. This guidance system proved revolutionary; other organizations had deemed similar navigational systems impossible. “Reid had been using them for two years!” Snoddy laughed.

Despite the relative inexperience of Snoddy, Reid, and Dr. Naumann at the time of their involvement in the Explorer 1 project, each was given the opportunity to work on vital components of the satellite or its accompanying experiments. Dr. Frederick, capitalizing on the opportunity to inspire current and future students, told the speakers that he was “impressed with how much responsibility you were all given” and asked his guests to give share their advice for aspiring scientists. “Just think ‘I can do this,’ and then do it,” said Snoddy, with Dr. Naumann adding, “If you see something that needs doing, do it.” Snoddy also advised the students to “just go for it, by golly,” emphasizing that they could have the same opportunities that the trio of speakers were given by working hard and being passionate about the science.

This advice had a real impact on those present. “I liked hearing about how the early engineers really invented everything to get us into orbit,” says UAH graduate student Sumontro Sinha, adding that he plans to share the inspiring stories to motivate his fellow engineering students. Dan Jones, another graduate student, wanted the speakers to know that he “took to heart” their words of encouragement for young engineers.

The three speakers that presented at the PRC luncheon worked during an era of exploration never matched, a period of research and scientific discovery that remains influential today. Dr. Frederick praised the speakers for helping the audience “to understand not only the technical challenges of that project, but also the political and leadership facets of that time in history.” Although future engineers will be entering a different political and social climate when they begin their careers, Dr. Frederick highlights the fact that they will face similar challenges in leadership and responsibilities similar to those encountered by the young scientists of the Explorer 1 project. Fortunately students who attended the luncheon are now better equipped for the challenges to come, emboldened by the stories of those who came before.