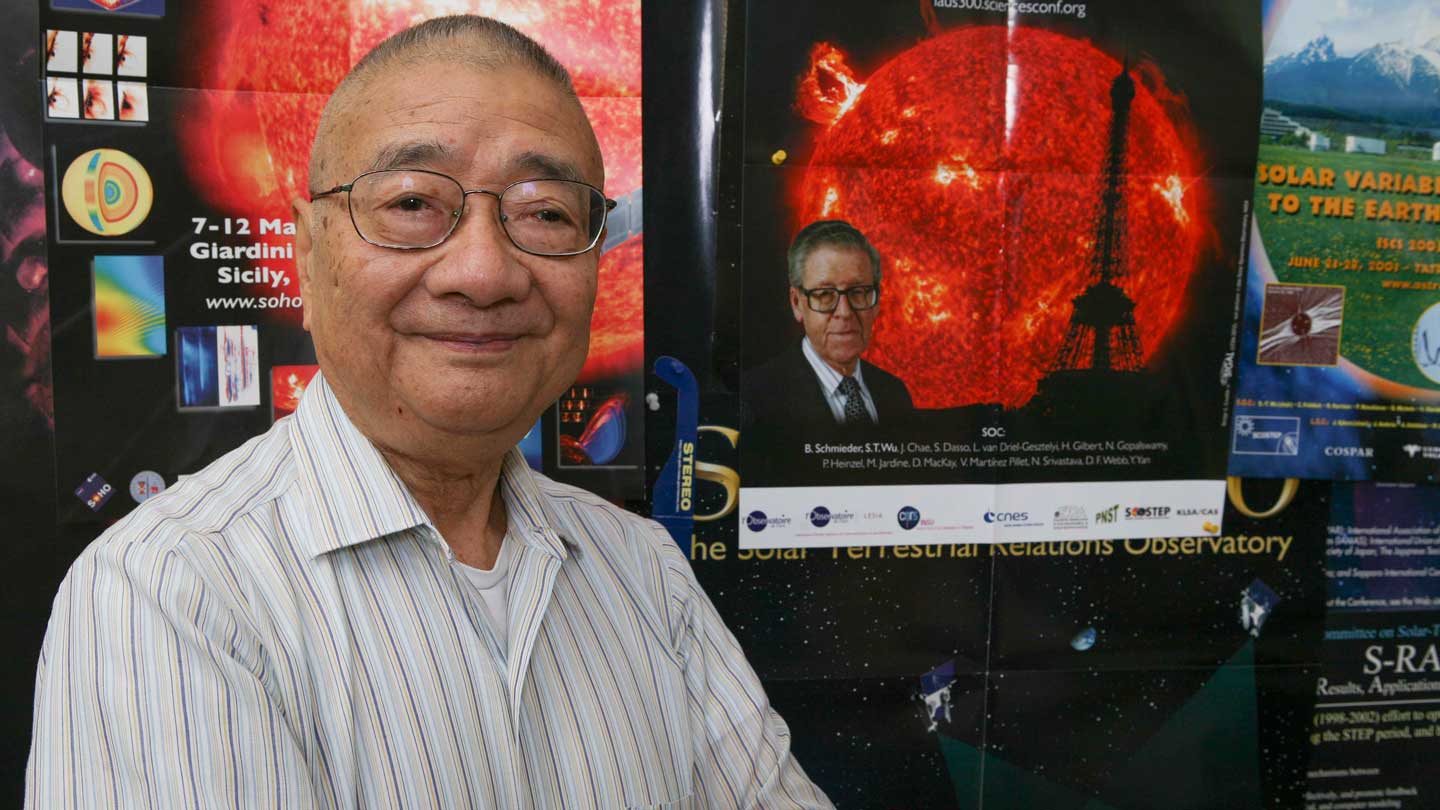 Scientists now have an observational framework to help predict solar weather and how it will affect Earth.

"Now it's possible that we can have a space weather model that's like Earth's meteorology," says physicist Dr. S.T. Wu, distinguished professor emeritus of The University of Alabama in Huntsville (UAH) Department of Mechanical and Aerospace Engineering and Center for Space Plasma and Aeronomic Research (CSPAR).

Being able to predict such events is important because a powerful direct hit by a coronal mass ejection (CME) is like a huge space hurricane that can deform Earth's magnetic field and fry the circuits of orbiting satellites, spacecraft and delicate terrestrial electronics.

In a large-scale storm, cell service would stop, air traffic control would lose its eyes and ears, and everything could be affected from traffic light control to the automated heating and cooling of buildings to the critical systems that control nuclear armaments. The Earth would become largely dark as power grids blink offline.

The solar radiation could directly affect the health of humans, too, Dr. Wu says.

"If you travel to the Pacific, the airlines like to fly you there over the North Pole," he says. "That is the most direct route. But during a coronal event, the solar radiation can affect people, so the airlines try to avoid it by flying below the polar route."

Diverting around the polar route is necessary but costs extra time and money, Dr. Wu says, which is why the National Oceanic and Atmospheric Administration meets with airlines annually about possible upcoming events. Better predictions would help airlines.

The new predictive model is the culmination of decades of work by Dr. Wu, the founder and first director of UAH's Center for Space Plasma and Aeronomic Research (CSPAR). He wrote his first research paper on the subject of CME modeling in 1978.

The new model advances previous CME work by Dr. Wu and a global research group that includes his former students and post-doctoral students.

Working with Dr. Wu are:

In the previous work, Dr. Wu's team devised a model for the development of CMEs that was tested and proven against CMEs observed in the past. The scientists also modeled the conditions that are present in solar magnetic shear - a sigmoidal twisting of the sun's magnetic field, flux emergence, null formation, torus instability, reconnection and free energy that can cause a CME. Their mathematical model of developing coronal mass ejections was shown to be accurate by comparison with actual observed phenomena from spacecraft tracking events on the sun's surface.

The researchers successfully performed a data-driven magnetohydrodynamic (MHD) simulation of a realistic CME initiation process, a step that helped lead to the predictive model and to better understanding the precursors to these solar storms.

The predictive model can foresee the development and impacts of a CME from its genesis on the sun through its journey in the interplanetary medium and to its interaction with Earth.

The presentation was well received by the scientists at the conference because "I didn't use any theoretical inputs," says Dr. Wu.

"Others are doing this work, but they are still using theoretical models, but our work is observational, and that is the difference," he says. "It is more realistic because we start out from the sun and what you can see there, and then we work our way out."

The model provides important information to other scientists working on solar storm prediction.

"I've got the framework that says it can be done, so now everybody can do it," says Dr. Wu. Further development of an accurate solar weather prediction system will take supercomputers and the efforts of many researchers and universities, he says. "Now, everybody can jump in with their own research."

Arriving at the working model took 36 years of research for Dr. Wu, a period of time he puts in perspective by talking about the development of meteorology.

"It took 60 years to develop accurate meteorology on Earth," he says. "Everybody knows we needed to do this, but finally we got a result. I feel really good about that I can get a handle on it."