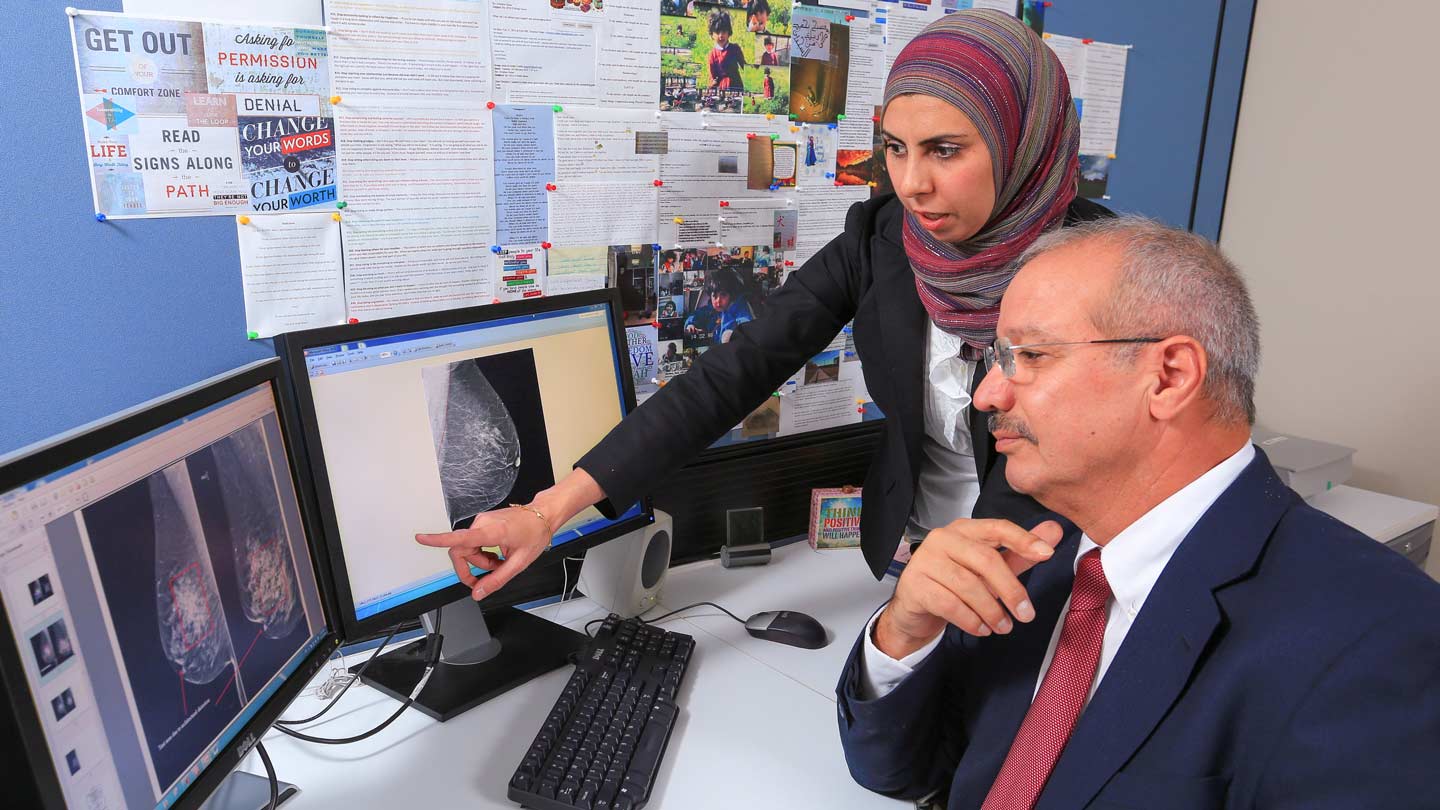 Dr. Reza Adhami (sitting) and Huda Al-Ghaib compare breast images. Adhami (Professor Emeritus) in UAH's Department of Electrical and Computer Engineering (ECE), and Al-Ghaib have been conducting research using Computer-Aided Diagnosis. Al-Ghaib will graduate on Sunday, May 3, with a PhD in ECE.

For nearly three years Al-Ghaib, a doctoral student at The University of Alabama in Huntsville (UAH), has been conducting research in the area of pattern recognition with medical imaging applications using Computer-Aided Diagnosis (CAD) to investigate landmarks that could identify suspicious breast lesions. CAD is widely used as a breast imaging technology for detection and characterization of cancer.

"With an improved registration algorithm we will be able to detect the gradual malignant changes in the breast tissue. Early detection of carcinomas increase the survival rate with more successful treatment options," said Al-Ghaib. "I consider cancer my only enemy in this world and if I can touch the life of one person with my mammography research that is all I need to make me feel that I have contributed to humanity."

Born in Iraq (Baghdad), Al-Ghaib received her bachelor's degree in computer engineering from the University of Technology in Baghdad (2006). While in Iraq she worked as an engineer in the Ministry of Higher Education and Scientific Research for two years. "Although my work was pleasant, I felt that it was not challenging enough for me. I was always curious and wanted to explore new things, and that is why the concept of graduate study came to mind. I wanted to pursue a graduate degree and never thought I would be able to do it in a foreign country. However, with family encouragement and support, I applied for a Fulbright scholarship to study in the United States. I eventually earned a Fulbright Foreign Student Grant to attend graduate school at UAH."

Since 2009, Al-Ghaib has been working under the supervision of Dr. Reza Adhami (Professor Emeritus) in the university's Department of Electrical and Computer Engineering (ECE) in signal processing technology. While completing her master's degree Al-Ghaib became interested in the area of pattern recognition and data mining. She completed and defended her masters thesis in electrical engineering in 2011. Adhami was professor and chairperson of ECE before retiring earlier this year.

"Dr. Adhami suggested that I review the dissertation of a former student that was related to breast tumor classifications," she explained. "I read it and became so excited and passionate about mammography. The more I read, the more interested I became in performing research in an area that one day could contribute to the enhancement of early breast cancer diagnosis."

But performing mammography research at UAH would prove to be a challenge. Because the university is not a medical school, Al-Ghaib and the members of the research team had to improvise in a big way.

"Our research team consisted of myself and another graduate student, Stephanie Cleveland. To complement the theoretical knowledge of the team with practical expertise, I was given the task of finding mammogram analysis experts at The University of Alabama at Birmingham (UAB), and here in Huntsville," explained Al-Ghaib. "With Dr. Adhami's help I arranged meetings with one of the best breast radiologists at UAB, Dr. Heidi Umphrey. The UAH team travelled to UAB several times and met with Umphrey, the program director for the UAB Department of Radiology Breast Imaging Fellowship. Umphrey provided the UAH team with more insight into the field of mammography." In addition, Al-Ghaib contacted one of the best breast radiologists in Huntsville, Dr. Melanie Scott. "She provided ultimate support for our research team, and allowed us to shadow her and learn more about mammography. Dr. Scott was always there to answer any questions regarding mammography and what is needed for the current CAD systems."

Al-Ghaib said current CAD systems are not smart enough to clearly identify or compare possible differences between mammograms taken in previous years on the same patient. "CAD systems provide initial screening by automating mammogram analysis and marking a suspicious region that is used by radiologists for final diagnosis. Some breast lesions are easily identified by CAD such as masses and calcifications, but almost all CAD systems lack a registration process. Therefore, to compare a patient's previous mammograms, radiologists have to perform the time consuming task of visually comparing temporal mammograms one at a time," she explained. "Having an automated mammogram registration could help locate changes in breast abnormalities over time. This streamlined process would then become a valuable tool by speeding up the inspection of mammograms by radiologists."

"When a human being (radiologist) observes two or more very similar pictures, the probability of detecting all differences is very low. However, machines can detect minuscule differences that may not be noted by human beings. This process is called automatic image registration.," Adhami explained. "A perfect mammogram registration system can detect signs that could alert radiologists regarding suspicious lesions. Further investigation by a radiologist could yield to early detection of breast cancer and hopefully decrease the mortality rate."

Adhami noted that Al-Ghaib has been commended for her research, teaching, and community service. "During her graduate work at UAH, she has authored and coauthored 10 conference papers and submitted four journal articles that are under revision. As a graduate teaching assistant (GTA) she has taught several laboratories including an introductory course, fundamentals of electrical and computer engineering laboratory, digital signal processing laboratory, and substituted as a lecturer in the graduate courses, digital signal processing, digital image processing, and graduate capstone design. When it comes to teaching, she gives her complete attention to student learning," Adhami said. "She is highly regarded and considered as one of the best teachers among students and faculty. And, Al-Ghaib was recently recognized for her outstanding performance in both teaching and research by the UAH College of Engineering. She was named the Outstanding Graduate Student of the year. This award is given to one student during the academic year."

Additionally, Al-Ghaib has been active in serving the local community as a volunteer for Friends, Inc. In this capacity, she provided support to patients with serious illnesses or disabilities, enabling them to maximize their independence. She also served as a volunteer for the American Cancer Society of Huntsville, where she served as a fund-raiser to support patients with cancers.

Most of Al-Ghaib's research activities have been funded by Adhami. She also received financial support from the UAH Office of Diversity to attend and present research findings at national conferences. "The knowledge that Huda gains from attending these conferences will be invaluable to her UAH research efforts," said Delois H. Smith, Vice President for Diversity. "Breast cancer research and its benefits are a concern for all women, and men as well. The focus and continuing emphasis Huda's research brings to this devastating disease lends hope to all breast cancer survivors and their families."

"Two of the best opportunities given to me at UAH was the support that I received from the Office of Diversity and Dr. Adhami to attend a mammography seminar held last year in Arizona by world renowned mammogram analysis scientist, Dr. László Tabár," said Al-Ghaib. Tabár is a well-known radiologist and researcher in the area of screening mammography. At the seminar, Al-Ghaib was the only engineer among 58 well known and experienced radiologists.

Al-Ghaib graduates from UAH on Sunday, May 3, with a Ph.D in ECE. She accepted an academic position in Utah that will allow her to continue conducting independent mammography research.