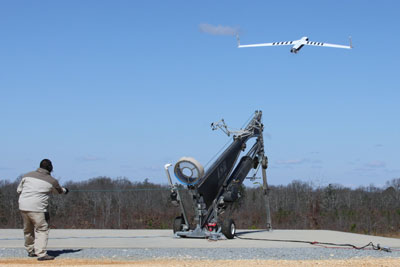 HUNTSVILLE, Ala. (Aug. 20, 2013) - A consortium led by The University of Alabama in Huntsville is among 27 groups that are competing for six national unmanned aerial system test sites that will be chosen before the end of the year by the Federal Aviation Authority.

The FAA's selection of the UAH proposal would provide a significant economic boost to a region with Huntsville as its largest city, according to an economic analysis by the Chamber of Commerce of Huntsville/Madison County. The study reveals says that the influx would ramp up the local tax base. "The revenue impact is primarily local and will remain in the region to generate new growth," the report states.

The consortium is led by Sue O'Brien of UAH's Rotorcraft Systems Engineering and Simulation Center. The effort includes other colleges and universities, as well as corporate partners.

The FAA is scheduled to make a decision by Dec. 31, and the agency will conduct site visits in the coming months. Mandated by Congress to be implemented in 2015, the test sites will be used to develop methods and systems that will integrate UAS flights into the nation's airspace.

"The FAA UAS testing site would leverage the technology being developed in Huntsville into 'real time' uses that would lead the future commercial industry," said Huntsville Mayor Tommy Battle. "Our experience in unmanned technology will provide the expertise to provide proven products in the field."

The Huntsville area's aviation and defense industry will benefit from having a test site headquartered locally because such a strong base of expertise exists in Cummings Research Park, NASA, Redstone Arsenal and Arnold Air Force Base, Tenn., infrastructure that is developing UAS technologies, O'Brien said. "Adding the capability to test will only draw more work into the area. There is a huge savings in being able to complete all plans locally and fly within a short distance of Huntsville," she said.

The FAA UAS testing site would leverage the technology being developed in Huntsville into ‘real time’ uses that would lead the future commercial industry. Our experience in unmanned technology will provide the expertise to provide proven products in the field.

"When one adds to the mix the number of UAS companies that have a major presence in Huntsville, this really starts to set us apart from anywhere else in the country," Hazelwood said. "Huntsville has one of the highest concentrations of engineers in the country with expertise in many of the fields that are considered critical to expanding the commercial use of unmanned systems. Furthermore, the population in North Alabama has a rich history in being part of or even leading the way in new technologies in space, aviation, missiles, etc."

An FAA test site would bring together a web of UAS and aviation experts from industry, government and academia, according to O'Brien. The partnership joins academic research and development universities with talent that would complement such a test site.

The FAA-approved test sites will in effect be given a blanket COA for research and development, according to O'Brien. It's expected that approved sites would benefit by being funneled future FAA UAS work as it becomes available. "Right now in order to fly a UAS legally, a Certificate of Authorization (COA), which requires approval by the FAA, is required. That process can be very involved and time-consuming," she said.

The effort has garnered the support of the local Pathfinder Association for Unmanned Vehicle Systems International (AUVSI) chapter, a non-profit organization devoted exclusively to advancing unmanned systems and robotics.

AUSVI Pathfinder President Peter Blocker said: "(T)he Huntsville community is a critical part of leading UAS to the future. The technical talent base is here, and now we need the test site to take full advantage of that wealth of technical knowledge."