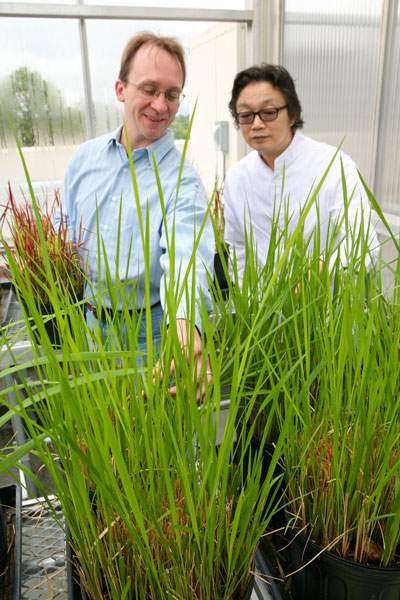 UAH assistant biology professor Dr. Leland Cseke, left, shows Dr. Jian Han the differences between ornamental red grass, which Dr. Cseke is holding, and the cogangrass that is in the foreground at the greenhouse at UAH's Shelby Center for Technology.

University of Alabama in Huntsville assistant biology professor Dr. Leland Cseke and HudsonAlpha Institute for Biotechnology researcher Dr. Jian Han have joined forces to identify invasive plant species that are sneaking into the United States because they look just like desirable crops or ornamentals.

Using a machine developed at the Institute, Dr. Cseke's research team at UAH is developing molecular methods akin to plant forensics or DNA fingerprinting to identify harmful invasive plant species that are poseurs. The machine is made by iCubate, a company that was spun off from work done at the Institute by Dr. Jian Han.

"We named the company and the product iCubate because it may also be used as a verb," said Dr. Han. "Instead of incubate it, iCubate it."

Dr. Han and Dr. Cseke have teamed up with the help of two U.S. Dept. of Agriculture (USDA) grants awarded to Dr. Cseke. Under the designation Rapid Automated Barcode Observation (RAMBO) system, USDA provided a two-year grant for $74,665 to develop a rapid molecular identification system for prohibited plants and a two-year $156,742 grant for a rapid automated molecular diagnostic system for federal noxious weed inspection and survey activities.

"Dr. Cseke initiated the collaboration. He was interested in the market need, while iCubate provided the technological solution," Dr. Han said. "After hearing a talk I delivered, Dr. Cseke became interested in the technology and now he's working with us on this application. I also see many more applications in the future, both for research and for clinical use. Physicians' offices, urgent care clinics, the food safety industry - anytime a DNA test is needed, iCubate can be used."

Dr. Han brings to the project the iCubate he invented, which speeds processes by automating many laboratory functions of polymerase chain reaction (PCR) assays into a single, closed cassette. Dr. Cseke gathers plant material from around the country and processes it to elucidate the DNA sequence differences that he then uses to design the iCubate assays.

"Dr. Cseke develops the appropriate targets and iCubate provides the tools to move things forward," Dr. Han said. "It has been a good partnership."

The project started by examining cogongrass. "It's a really bad weed because it spreads rapidly and it is basically taking over the Southeast U.S.," said Dr. Cseke. "It's this horribly invasive weed that probably will wind up being worse than kudzu at some time in the future."

Cogongrass (Imperata cylindrica) is of interest because it is vigorous, it secretes materials into the surrounding ground that kill other plants in a process called allelopathy, and it can infiltrate forests. Once a forest infested with cogongrass is set ablaze, through natural or other means, the grass burns with much greater intensity than native plants. Thus, it can kill entire forests and clear the land for it's own benefit.

And cogongrass is a wolf in sheep's clothing because it has an "evil" counterpart that is easily dismissed by its appearance as a harmless ornamental.

"One of the really bad things about cogongrass is that it has an ornamental counterpart called Japanese blood grass or Red Baron grass. This seemingly harmless ornamental can spontaneously revert to a form that looks and behaves exactly the same as cogongrass," Dr. Cseke said.

While cogongrass first came into the United States near Mobile and at other Southern ports in the early 1900s, Dr. Cseke said, "the red grass was produced by nurseries all over, and they made millions from selling it for years. When stressed, it can revert to cogongrass. You get these patches of red grass reverting, and taxonomists can't tell the difference. Once it infiltrates, it's hard to eliminate." Cogongrass infestations are extremely hard to clean up. Currently the practice is to treat it with a two-herbicide mix for three years.

The cold-hardy ornamental plant and the sun-loving invasive weed are of the same species, so there is concern that if the two cross, a cold-hardy cogongrass hybrid could survive all the way to the Canadian border. "At the molecular level, they are all basically the same," said Dr. Cseke. "Their DNA sequence is the same except for one or two base pairs in specific regions of the genome." 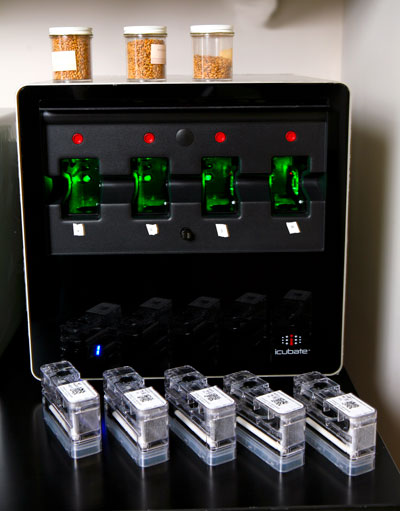 Invented by Dr. Jian Han, the iCubate speeds processes by automating many laboratory functions of polymerase chain reaction (PCR) assays into a single, closed cassette. The cassettes are shown in front of the machine.

That's where Dr. Han's iCubate device comes into play. It can quickly do polymerase chain reaction assays to identify DNA sequences that can determine if the plant is ornamental, cogongrass or an ornamental that has reverted to cogongrass.

"Molecular diagnosis has three major steps: get the DNA out from living things, called extraction; get the target gene amplified; and detect the target," Dr. Han said. "iCubate is the only system on the market that is fully integrated to do all these steps automatically, multiplexed so it can amplify many targets at once, and in a closed system that amplifies DNA in a cassette to prevent causing a false positive test result."

"I'm working with Dr. Han to use his equipment to make the distinctions in cogongrass possible," Dr. Cseke said.

Assays to be PCR tested by Dr. Han's machine are created by grinding plant material in liquid nitrogen and separating out the DNA strands, processes attended to by UAH post-doctoral associate Li Qiu and undergraduate Kristen Bergstrand. Together with Dr. Cseke, these researchers are working to make the process even faster and easier.

"What we are trying to do now is direct PCR, where we take a sample of plant tissue and use that directly to do our tests, sort of like a biopsy," Dr. Cseke said. "We're trying to make that work with Dr. Han's equipment."

Though cogongrass started the research, the iCubate can be used to identify other exotic invasive plants, as well, like giant hogweed ( Heracleum mantegazzianum) and invasive "wild" sugarcane (Saccharum spontaneum), which looks like agricultural sugarcane but does not produce abundant sugar and has the potential to hybridize with desirable sugarcane plants.

"If you can't tell the difference," said Dr. Cseke, "then you are planting cane that looks the same but may spread quickly, take over your land and harbor disease."

The invasive plant list is expanding. Through the USDA, the researchers are in contact with U.S. ports, which provide suggestions for the species they have found to be the most problematic. Then the research team looks at the online DNA profiles of each species to see if it is of interest for study as an invasive.

Nationally, scientists are working on developing a categorization system to determine the characteristics of plants that have the potential to become invasive. One way invasive plants hit U.S. shores is in the vents and filters of cargo ships. Sucked in overseas, the invasive seeds can then be released in the U.S. during cleaning.

"Currently, the U.S. lets everything in as part of 'free trade' and takes samples of incoming crops and seeds that eventually will get studied by someone," said Dr. Cseke, who sees how the iCubate could speed that process. "The advantage of Dr. Han's equipment is that it could be placed in every port for onsite DNA testing."

"It really is plant forensics," Dr. Cseke said. "What we're trying to identify is, who's your daddy?"