Huntsville, Ala. (April 22, 2013) - A company hatched as a partnership between The University of Alabama in Huntsville and chemical engineering professor Dr. Krishnan Chittur is in the design phase for a device that can provide physicians one-hour pathogen testing capabilities.

GeneCapture, a resident company at the HudsonAlpha Institute for Biotechnology in Huntsville, Ala., has proven its patented technique in the lab and is now developing an automated prototype for higher throughput testing. The product involves unique DNA probes that "capture" a genetic signature quickly, and thus can be used to identify the presence of one of many specific pathogens in a sample, be it human, plant, food or animal. The company has recently collaborated with Huntsville Hospital in a validation study using human samples.

"It's one thing to say you can do it, and to show it in the lab, but it's another thing to develop it for manufacturing and third party use. " Dr. Chittur said. "How do you make it reliable, simple and rugged? We are designing this to be generic enough so that it can be used in a variety of clinical tests and research applications. 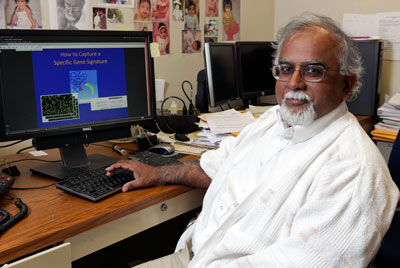 Dr. Krishnan Chittur in his office in the UAHuntsville Engineering Building.

MRSA and other hospital-acquired antibiotic resistant infections are particular areas of focus for GeneCapture. Highly sensitive performance is necessary because so many bacteria that reside in the human body are beneficial. 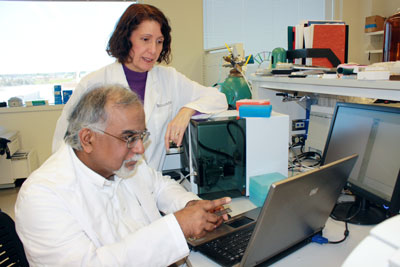 Dr. Krishnan Chittur, left, at the HudsonAlpha Institute for Biotechnology with Paula Koelle, one of the research scientists at GeneCapture.

"Our job is to pick out that one problem bacteria or virus that is causing infection," said Dr. Chittur.

Physicians are often faced with a modern-day needle in the haystack search when presented with a patient exhibiting a certain symptom set. The doctor may draw blood or take swab samples and send them off to the laboratory, but while waiting for the results to return, the patient may be treated based on an assessment of observed symptoms. Those assessments are less accurate than test results, sometimes causing incorrect or overtreatment.

"Suppose I told you to go look for a needle in a haystack," said Dr. Chittur. "Maybe there's a whole barn full of hay, and you have to go and find that needle. How would you do it? Would you go through it one piece at a time?

"Now imagine if I handed you an inexpensive, portable, powerful magnet to help you find that needle. "

Dr. Chittur is a cofounder of GeneCapture, the company formed to pursue the commercialization of the technology patented by Chittur and three other scientists while performing early research at UAHuntsville.

"Right now, we are trying to answer the question, 'Can I detect the presence of a particular pathogen within one hour of getting a sample?' " Dr. Chittur said. "Because when you go to the doctor, you have the pathogen in you at that time. I am not a biologist. I am an engineer, a problem-solver. If the pathogen is in your body, why can't we find it fast?"

Rather than traditional tests that require cell culturing or those that look for antibodies or other reactive agents created by the body in response to the disease, Dr. Chittur uses stem loop DNA probes designed to bind specifically to the DNA in a targeted pathogen. It's a direct proof of the presence of the causative agent, rather than indirect evidence.

We want to get a prototype perfected and begin more testing.

The probe and the pathogen bind through the hydrogen bond of complimentary DNA pairs, the bond that gives DNA its distinctive double-helix appearance. Once a probe binds to a molecule, the probe will fluoresce, easily identifying the culprit.

"What we've done is design a magnet for genes," Dr. Chittur said of the stem loop DNA probes. "In one challenging experiment, we took sludge samples from the Huntsville Wastewater Authority and we asked, 'Can I pick out a specific bacterium from that very complex sample?' The answer was yes, we have done that."

The potential applications for a quick pathogen test range beyond the physician's office to include hospital screening, veterinary medicine, food testing and environmental assessment, Dr. Chittur said. "Our entire team is quite passionate about this product - we know how important it is."