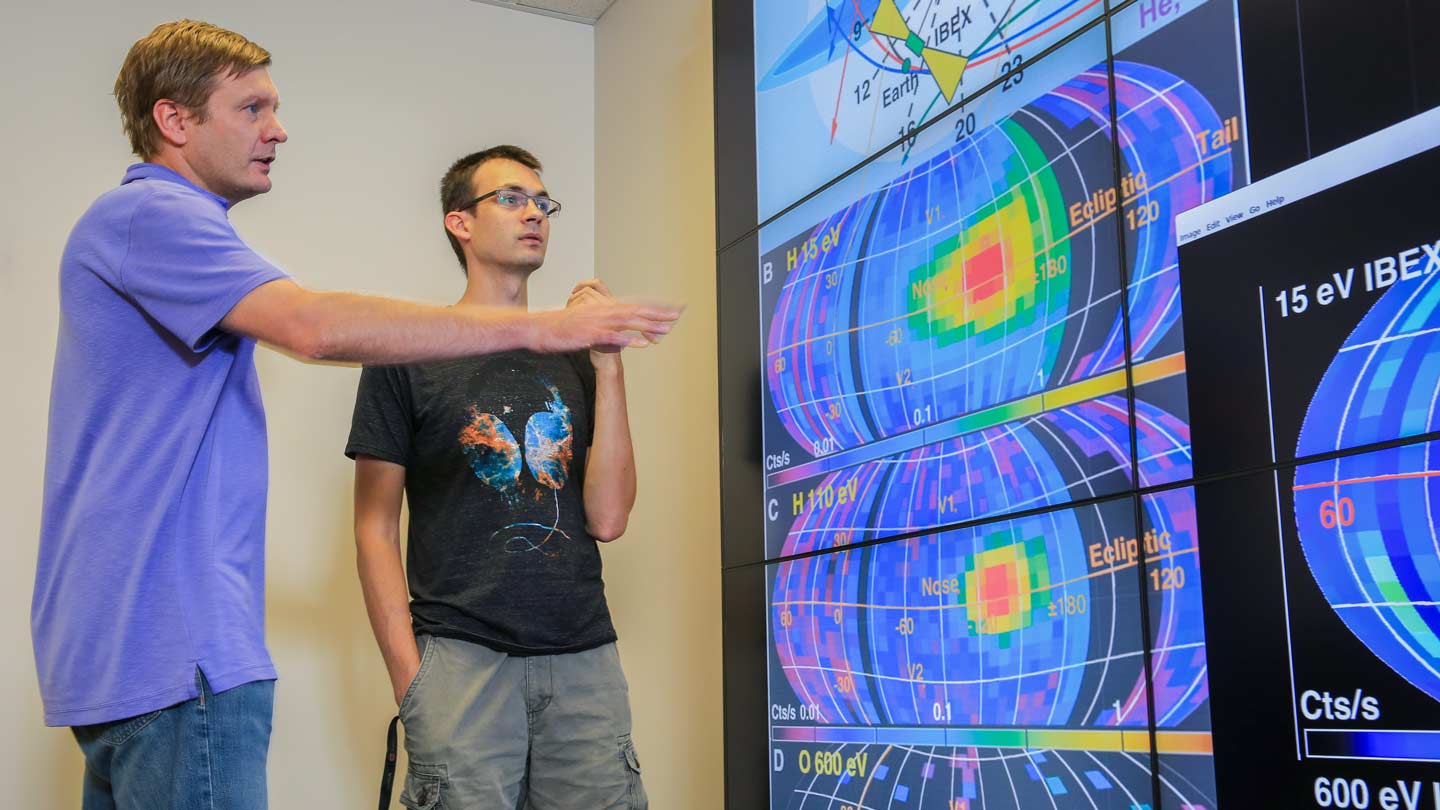 Dr. Jacob Heerikhuisen, associate professor of space science and the assistant director of CSPAR, and Anthony DeStefano, a graduate student and the recipient of a 2015-2016 NESSF award, are working toward a better understanding of the plasma distribution of the heliosphere.

Anthony DeStefano is used to parsing complex, highly technical information. As a Ph.D. candidate at The University of Alabama in Huntsville (UAH), he spends his days at the Center for Space Plasma and Aeronomic Research (CSPAR) writing code to calculate the trajectories of heavy atoms from the interstellar medium into the heliosphere. So it took him a minute to process the simple fact that he'd been selected to receive a 2015-2016 NASA Earth and Space Science Fellowship in astrophysics. "I was like, Wait a minute!" says DeStefano with a laugh. "I was in shock."

The fellowship, which provides up to $30,000 a year in funding, is one of the agency's most prestigious. Even more impressive is that DeStefano was actually one of three UAH students to receive an award for the upcoming academic year. Also selected were Yi-Yin "Ian" Chang, a Ph.D. candidate in atmospheric science whose research focuses on multi-sensor satellite analysis of aerosols above clouds and their radiative impacts, and Vikalp Mishra, a Ph.D. candidate in civil and environmental engineering whose research focuses on soil moisture estimations using remote sensing and other applications in agricultural models.

As for DeStefano's research, it focuses on gaining a better understanding of the elements contained in the gas - or plasma - that is produced by the sun and that makes up the heliosphere, a magnetic bubble that comprises our solar system, solar wind, and the solar magnetic field. "The plasma is primarily made up of hydrogen, but I'm looking at the next most important elements - helium, oxygen, and nitrogen - or what's termed heavy atoms," he says. "I'm trying to understand the impact of these elements on the plasma distribution."

One of NASA’s goals is to extend their knowledge of the heliosphere and this project will extend it ever so slightly.

A native of Princeton, Minnesota, DeStefano first learned about UAH's space science program after earning his bachelor's degree in physics and math from St. Cloud State University in St. Cloud, Minn. "I graduated in the spring of 2012 and then did an REU internship at UAH in the summer," he says, referring to the university's Heliophysics Research Experience for Undergraduates (REU) program, which invites 10 undergraduates from around the country to perform hands-on research with mentors specializing in heliophysics research.

"I worked on chaotic magnetic fields, so I did a lot of coding," says DeStefano, whose mentor on the project was Dr. Jacob Heerikhuisen, associate professor of space science and the assistant director of CSPAR. The experience proved to be serendipitous for the aspiring researcher, who at the time was still trying to determine the next step in his academic career. Shortly after completing the REU, DeStefano was accepted into UAH's graduate program in physics with Dr. Heerikhuisen serving as his advisor.

"While working on my master's degree, I wrote a code that would calculate the trajectories of heavy atoms from the interstellar medium into the heliosphere using a plasma that was outputted from a code simulated by CSPAR," he says. He later presented that work in a poster session at the American Geophysical Union's Fall Meeting in December 2014, one of the largest Earth and space science meetings in the world, and at the American Physical Society meeting this past spring.

Now, one year into building upon that foundation for his doctoral research, the fellowship couldn't have come at a better time. A no-brainer for NASA - "One of their goals is to extend their knowledge of the heliosphere and this project will extend it ever so slightly," he says - it was a game-changer for DeStefano, who was on the brink of running out of funding when he received news of the award. Not only does it cover his tuition and living expenses, but it also ensures he won't have to take precious time and focus away from his research to teach classes as a graduate assistant.

"If you get distracted and come back to it, you won't remember the last thing that you did," says Dr. Heerikhuisen. "This fellowship will help him come to work and just think about research." It also sets DeStefano up well for the future. One of Dr. Heerikhuisen's former students was also the recipient of an NESSF award; he now works at the Southwest Research Institute in San Antonio, TX, with Dave McComas, a mission principle investigator for NASA's Interstellar Boundary Explorer (IBEX).

Whether or not DeStefano will end up following in his footsteps has yet to be determined. "I'd like to get a post-doc position, and after that, maybe pursue an academic position or go off into the private sector," he says. "But I'm still trying to figure it out." And these days, he has more pressing problems to solve anyway - like just when he'll be able to celebrate his big win. "I haven't had time because I'm taking two classes and teaching another one right now," he says with a laugh. "But it's super exciting!"