UAH findings on makeup of universe may spawn new research 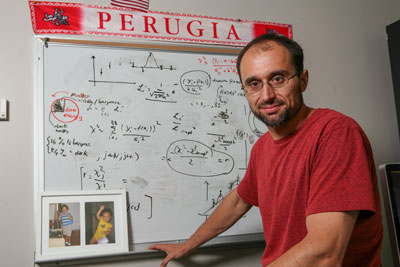 Michael Mercier | UAH
Dr. Massimiliano (Max) Bonamente, University of Alabama in Huntsville associate professor of physics, who helped then-UAH graduate student David Landry author a paper that concludes that baryons making up all visible matter – once thought to be missing – are present in the expected ratios in large, luminous galactic clusters.

HUNTSVILLE, Ala. (July 16, 2013) - New areas of extragalactic study may emerge from research by University of Alabama in Huntsville (UAH) astrophysicists using data from the Chandra X-ray Observatory to conclude that baryons making up all visible matter – once thought to be missing from clusters – are present in the expected ratios in large, luminous clusters.

The new research studied very large galaxy clusters and concludes that they indeed contain the proportion of visible matter that is being worked out as part of the Big Bang Theory. The paper was authored by then-graduate student David Landry with Dr. Massimiliano (Max) Bonamente, UAH associate professor of physics, Paul Giles and Ben Maughan of the University of Bristol, U.K., and Marshall Joy of NASA Marshall Space Flight Center. (“Chandra Measurements of a Complete Sample of X-ray Luminous Galaxy Clusters: the Gas Mass Fraction;” Monthly Notices of the Royal Astronomical Society; Oxford University Press; http://dx.doi.org/10.1093/mnras/stt901) Dr. David Landry is now a scientist at Corvid Technologies in Huntsville, Ala.

The work may prompt new efforts to explain past research findings that some clusters have a deficit in baryons from what is expected. The universe is composed of about 75 percent dark energy and 25 percent matter. Of the portion that is matter, about 16 percent is the familiar visible matter that is all around us and the remaining 84 percent is dark matter.

While dark energy has a repulsive energy, dark matter and baryonic matter have an attractive force where “everything likes to clump together” to form stars and planets and galaxies, said Dr. Bonamente. Using x-rays, astrophysicists discovered that there is a diffuse hot plasma gas that fills the space between galaxies.

“Basically, the space between galaxies is filled with this hot plasma that is 100 million degrees in temperature,” said Dr. Bonamente. Because the gas is so diffuse, it has very low heat capacity. “It is like if I posed this question to you: Which would you rather put your finger in, a boiling cup of water or a room that had been heated to 212 degrees Fahrenheit? You choose the room because the temperature inside it is more diffused than it would be in the concentrated cup of water, and so you can tolerate it.”

Since recently, people believed that clusters had less than 16 percent of baryons, so there were missing baryons. We said no, they are there. So, how did we find clusters with this correct ratio? We studied the most luminous ones, because they have more mass and retain more baryons.

So why doesn’t the hot gas simply escape? “It is bound to the cluster by gravity,” said Dr. Bonamente. “With hot gas, you can do two things. You can measure the regular matter, which is the baryon content. And two, since the hot gas is bound, you can measure how much matter it would take to hold the gas and therefore you can tell how much dark matter there is.

“All of a sudden, there is something really wonderful about the hot gas,” he said. “You can have your cake and eat it, too.”

Theoretically, the universe should contain the same proportions of visible and dark matter regardless of where it is sampled. Using cosmic microwave radiation readings, astrophysicists have been able to do a type of forensics of the universe’s past, and those findings have shown the proportions that were present at the Big Bang or shortly thereafter.

“Because it started in the Big Bang, that ratio should persist,” Dr. Bonamente said. “It is like if I go to the ocean with a scoop. The scoop of water I get should have the same concentration of salt as the rest of the ocean, no matter where I get it.”

But past research had indicated that some clusters were short on the expected percentage of baryons, posing the question of where they were.

“Since recently, people believed that clusters had less than 16 percent of baryons, so there were missing baryons,” Dr. Bonamente said. “We said no, they are there. So, how did we find clusters with this correct ratio? We studied the most luminous ones, because they have more mass and retain more baryons.”

The findings could open new areas of investigation into why the deficits in baryons were recorded in past research. Dr. Bonamente suggests one theory. “We know that some smaller clusters do have lower concentrations of baryons than the larger ones,” he said. Perhaps because of weaker gravitational forces, the hot gases escaped in similar fashion as planets that have no atmosphere. “Maybe the gas can be bound but maybe a little bit can fly off if there is just not quite enough gravity.”

For further studies on smaller clusters, Dr. Bonamente looks forward to the arrival of new faculty member Dr. Ming Sun, formerly at the University of Virginia, who is an expert on groups having less than 16 percent baryons.

“I am excited that Ming has decided to join our research group,” says Dr. Bonamente.“With him on board, UAH is poised to continue making discoveries on the makeup of the universe, and that is the most exciting question to answer that I can think of.”