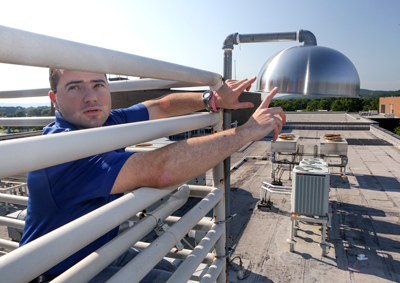 Dr. Phillip Bitzer, an assistant professor of atmospheric science, has installed a lightning sensor on the roof of UAH’s National Space Science Technology Center. A still camera is being installed to provide time-lapse photos of weather that will be viewable on the web. Dr. Bitzer also plans to install two high-speed video cameras in this location as well.
Mike Mercier | UAH

HUNTSVILLE, Ala. (September 10, 2013) - A device developed at The University of Alabama in Huntsville (UAH) has become a valuable tool in researchers' quest to determine how lightning is spawned in clouds, to map strikes from beginning to end and to better predict severe weather.

The Huntsville Alabama Marx Meter Array (HAMMA) sensor literally resides under a large inverted metal salad bowl to protect the electronics from rain. A modern electronic reinvention of a sensor first developed in the 1950s, it detects the radiated electric field in the atmosphere when lightning strikes.

Using the data from a network of HAMMA sensors, the computer generates maps showing the intensity and distribution of the lightning.

Operating in the very low frequency (VLF) spectrum, HAMMA can detect both the intensity and duration of a bolt, called its energetics, and provide scientists with more information than previous mapping array instruments, which usually operate in the very high frequency (VHF) spectrum.

VHF equipment is better at detecting the smaller discharge processes from a lightning strike, while the VLF HAMMA device reads large discharges that are associated with more energetic processes, like the bright return stroke, Dr. Bitzer said. "The combination of VLF and VHF measurements may tell us a whole lot more about what is going on in the flash than either one by itself."

HAMMA may also help with one of the mysteries of nature - exactly how a lightning bolt gets started in the clouds, an event scientists call initiation.

"We really don't know how initiation works," said Dr. Bitzer. "One of the big unanswered questions of lightning research is initiation, and that's one we are interested in. We're trying to get a handle on how lightning starts. How does all of this work?"

We’re trying to get a handle on how lightning starts. How does all of this work?

It's known that lightning is caused by buildup of positive and negative electrical charges inside a cloud. In the cloud, an embryonic version of hail called graupel collides with ice crystals. This collision usually leads to graupel acquiring a negative charge and ice a positive charge. These separate in a thunderstorm updraft to produce the electric field necessary to produce lightning. However, researchers have never measured an electric field sufficiently strong to itself initiate a lightning strike. Something else must happen to trigger the event, and there are two primary theories about that.

The first theory postulates that the electric field is locally enhanced by the hydrometeors in the cloud, thus enabling lightning to initiate. A competing theory suggests that cosmic rays bombarding Earth from outer space initiate lightning by introducing high-energy electrons that begin the cascade leading to a strike. HAMMA now gives researchers a front-row seat to the processes going on at initiation.

"What we're able to detect is the initiation of the lightning, which is typically about 30 milliseconds ahead of the lightning stroke," said Dr. Bitzer. This is the point in a lightning strike when the bolt sends down electrical "leaders" that eventually meet with ascending leaders from the Earth to form the pathway the stroke then follows.

"One thing we've been able to show is that using VLF measurements in a network like HAMMA can give us a better idea of the location of different-scale processes that occur during initiation," Dr. Bitzer said. "In addition, you are able to estimate the strength of a flash."

Historic databases created from past storms can be valuable in predicting the behavior of future ones, Dr. Bitzer said, because there is a significant uptick in lightning strikes that precedes the main event as a storm arrives.

"If you include lightning data with currently used observations, we're better able to forecast severe weather," he said. "This system will show whether we are able to incorporate energetics to then increase lead time to predict a severe storm."

UAH researchers are working on more tools to get to the core of the process that causes lightning to strike, including development of a Geostationary Lightning Mapper (GLM). The GLM will allow UAH scientists to view storms from space in a geostationary orbit ­-a fixed position relative to Earth - providing unprecedented ability to track lightning activity.

Similar measurements are currently provided by the Lightning Imaging Sensor (LIS); however, this instrument is on a satellite that is in low-earth orbit, which means it is unable to track changes in lightning activity over the lifetime of a storm. Another version of LIS built at the same time as the first is scheduled by NASA to be mounted on the International Space Station. UAH engineers are testing and calibrating it now.

In 2015, the GLM will fly on the Geostationary Operational Environmental Satellite R-Series (GOES-R) a joint effort between NASA and the National Oceanic and Atmospheric Administration (NOAA). Engineers at UAH are helping to build GLM and UAH scientists are working on how the GLM will gather information. Other UAH researchers are working on how to transition the gathered data to weather forecasters in a form that is most useful to them for predictions.

HAMMA will play a key role in validating GLM performance and further understanding of the data it provides. The measurements from space are well correlated to VLF measurements that HAMMA provides. "HAMMA is a great complement to all the lightning research UAH is actively pursuing," Dr. Bitzer said.