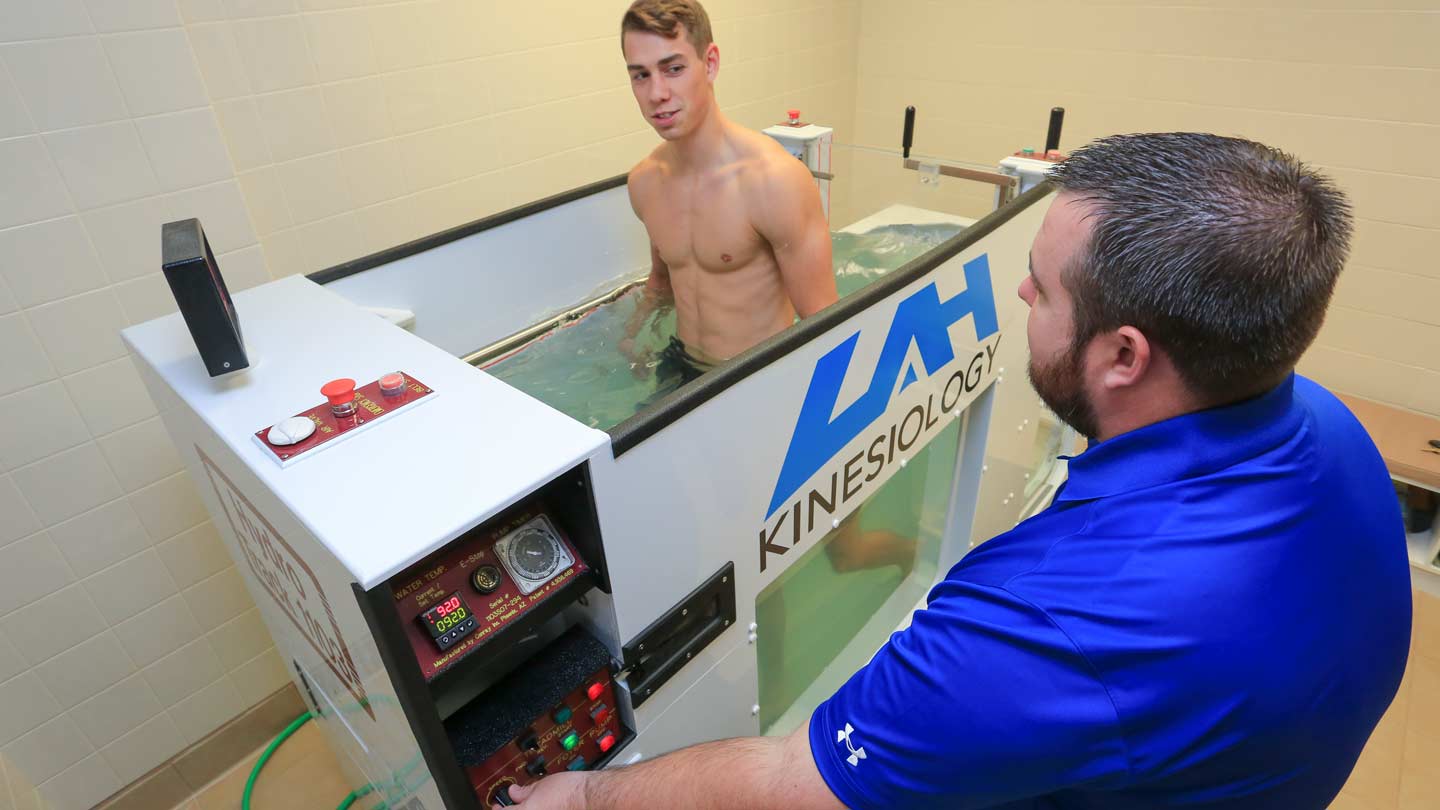 Dr. Ryan Conners observes as Jonathan Bailey (co-investigator) exercises on the underwater treadmill. The Department of Kinesiology will soon use the treadmill to conduct diabetes research.

A kinesiology professor at The University of Alabama in Huntsville (UAH) is using underwater treadmill exercise to break new ground in type 2 diabetes research.

Dr. Ryan T. Conners, Assistant Professor of Kinesiology at the UAH College of Education (COE) is conducting aquatic exercise research with adults diagnosed with the chronic illness. Additionally, Conners is opening his research to other special populations, such as adults with lower leg amputations. This summer, the Department of Kinesiology is recruiting lower limb amputees to explore the effect of underwater walking on physical function, fall risk, and mobility.

"The acquisition of the underwater treadmill for the UAH Kinesiology Department is a major milestone. It is our goal for UAH to have one of the top undergraduate Exercise Science programs in the country," said Conners. "This unique piece of equipment allows for ground-breaking research to be conducted at UAH. Beyond being a focal point of research, the underwater treadmill has also been an integral part of the classroom for our Exercise Science students. The students are able to work with state of the art equipment and better prepare them for success in the occupational field of rehabilitation upon graduation," he added.

Specifically, the treadmill has a belt-drive that is set-up on a double ground fault circuit interrupter protection system. The treadmill belt is 18 inches wide, which allows for multiple types of gait patterns while walking in the weight-supporting environment. The belt is composed of a slip-resistant material and is different from a traditional land-based treadmill. The unit also contains a large Plexiglas door and view window so that constant monitoring of the participants can be maintained and can also be used for gait analysis.

In contrast, Conners said, "traditional land-based treadmills have been used for years to improve or maintain cardiovascular endurance. However, performing these commonly suggested exercise modes can lead to overuse injuries, especially among individuals who are relatively sedentary, overweight, display low exercise capacity, or experience musculoskeletal pain while engaging in traditional forms of aerobic exercise.

"The use of a treadmill submerged in a self-contained tank allows for the precise control of walking speed, water depth, and water temperature, a trio of variables which can markedly influence aerobic and strength training responses," he added.

Conners noted further that research studies show partial support supplied by the buoyant effect of water also creates a more comfortable and realistic unloading of body weight than that provided by typical harness unweighting systems and can serve as an effective alternative to land-based walking programs in adults who display mobility and balance problems and lower-limb joint and muscle weakness.

Other advantages of walking on an underwater treadmill include greater muscle activity and gait patterns similar to those recorded during land walking, enhanced cardiovascular function due to the hydrostatic pressure of water, and increased leg strength caused by overcoming water resistance and turbulence.

Conners said building an aquatic exercise program is similar to that of a land program, because it is based on the specific needs of patients. "While walking is the most commonly used form of exercise performed in the underwater treadmill, the unique aspect of the machine is that a person is able to perform concurrent cardiovascular and resistance training. The features of the underwater treadmill allows for a variety of exercise programs to be created, such as the creation of a low intensity exercise program for individuals who have special exercise considerations, all the way up to high-level athletes who are trying to gain an advantage in sports performance."

In the past, Conners said, aquatic treadmill training was used primarily to treat injured athletes because it allowed for an individual to maintain their level of cardio-respiratory fitness while having reduced musculoskeletal loading occurring while recovering from an injury or surgery. "However, recently many researchers have realized that the benefits of performing aquatic training can be useful for populations other than athletes."

Aquatic therapy is also safer for diabetic patients because it allows for simultaneous resistance and cardiovascular training. Therefore, the overall duration of the workout is shorter and it decreases the likelihood of a hypoglycemic attack. The use of an aquatic treadmill program has also been shown to help increase balance and reduce fall risk among older adults.

Conners earned a Bachelor's Degree in Athletic Training from Canisius College (Buffalo, New York), Master's Degree in Exercise Science, and a PhD in Health and Human Performance with a concentration in Exercise Science from Middle Tennessee State University. He holds numerous professional and academic memberships with the American College of Sports Medicine, National Athletic Trainers Association, American Diabetes Association and National Association for Kinesiology in Higher Education. Additionally, Conners has co-written three recent articles published in The Journal of Strength and Conditioning Research, The International Journal of Exercise Science, and The International Journal of Aquatic Research and Education.