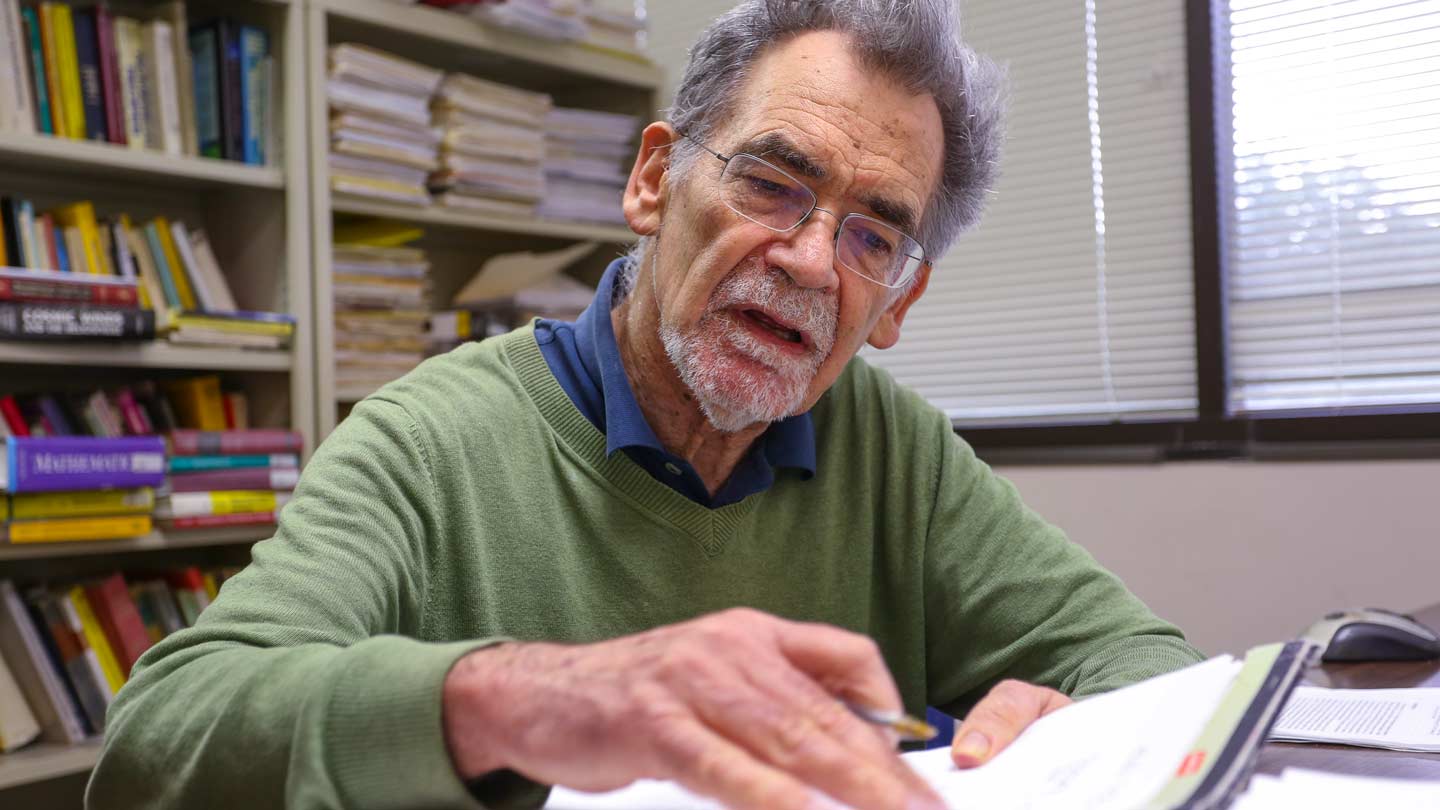 Dr. Gary Webb, a UAH research scientist at CSPAR, explains the calculations in the recent paper in his UAH office.

New calculations by a theoretical astrophysicist at The University of Alabama in Huntsville (UAH) provide tools that open a door to exploring the history of events in astrophysical flows and in plasma fusion devices described by magnetohydrodynamics (MHD).

The calculations shed further light onto fluid dynamics on the Earth, on the sun or anywhere electrically conductive fluids are in motion in conjunction with magnetic fields.

Dr. Gary Webb, a UAH research scientist in the Center for Space Plasma and Aeronomic Research (CSPAR), was the lead author of a paper that includes the new calculations. Co-authors are Dr. J.F. McKenzie (deceased) of Durban University of Technology in South Africa and CSPAR Director Dr. Gary Zank. Dr. McKenzie supervised Dr. Zank while he was completing his doctorate.

"There's a whole forest of things it's associated with," Dr. Webb says of his theoretical work. "People who do physics and mathematics frequently use conservation laws to describe the physical system."

For a system described by conservation laws, there are physical quantities, which do not change with time.

"However, there are certain conservation laws that do not hook things up directly, but instead possess a sort of memory," says Dr. Webb, going on to describe how a process known as baroclinic instability can create fluid spin, a concept often used in atmospheric science.

"If the density gradient and the pressure gradient are misaligned, you actually get a mechanism that creates spin (vorticity) in tornados. The baroclinic mechanism of creating fluid spin is also associated with the misalignment of temperature and entropy gradients," he says.

"We discovered some conservation laws that had memory in association with fluid spin." That points to what Dr. Webb calls "a grander scheme of things" with potential wider physics applications.

According to Dr. Zank, the CSPAR director, "Despite the sometimes advanced mathematics used to explore the subtleties of conservation laws introduced by Dr. Webb, his ideas are of great utility to the practical solution of the MHD equations in a variety of important physical settings, including the sun's atmosphere and the Earth's geospace environment."

"What I am doing is in classical physics, but these things have application in other areas of physics, as well, like quantum mechanics, string theory, quantum gravity, general relativity, electromagnetic theory and so on" says Dr. Webb. "There are conservation laws in spinning fluids that are associated with the entropy of a fluid. In ideal fluids, the cumulative history of the temperature of the fluid is important in determining the fluid spin (vorticity) which is described by nonlocal conservation laws."

Physicists typically use conservation theory calculations that project an event forward from the point in time at which it is occurring. The new work gives rise to the ability to see behind the present event, back into its history.

"There are certain conservation laws that have a memory of this history," says Dr. Webb.

"If you use metal filings and a bipolar magnet, they will organize themselves in a certain way and you will have a pattern of filings that are aligned with the so-called magnetic field lines," says Dr. Webb.

Elie Cartan, Emmy Noether, Henri Poincare and others contributed to the theory of conservation laws and their connection to symmetries of the equations. Their work formed the basis for the development of mathematical fluid dynamics theory, now referred to as geometric mechanics, since it depends on geometric ideas. It also applies to the mechanics of solid spinning bodies such as tops, spinning satellites etc.

Each of the early physics pioneers contributed a different idea of how a force equation works and those ideas were later used in fluid dynamics. The new paper builds further on that base.