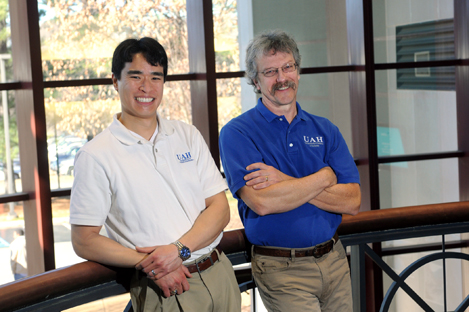 Dr. Allen W. Wilhite, and Dr. Eric A. Fong co-authored a paper on the unethical practices of some journal publications.

Two faculty members from The University of Alabama in Huntsville's College of Business Administration were published today in the prestigious journal Science for their investigation of an important issue in research ethics.

Dr. Allen W. Wilhite, and Dr. Eric A. Fong co-authored a paper on the unethical practices of some journal publications, articulating results from their research to show that some editors coerce authors into adding unnecessary citations to articles in the same journal that is considering publishing the submitted work.

Journal editors want to increase the number of times articles within their journals are cited by researchers – because it raises the journal ranking and is used to make claims of prestige and importance.

"When we first learned about coercion we were stunned, but after asking around we found that several people were aware of this behavior," said Dr. Wilhite. "At that point we decided to look into the extent and consequences of the practice."

The duo analyzed 6,672 responses from a survey that was sent to researchers in the fields of economics, sociology, psychology, and business.

According to their research, Wilhite and Fong determined that many journal editors engage in the practice of coercion, requiring authors to add citations to the journal that is considering publishing the work.  They require additional citation of articles in the journal that will publish the work - without (1) indicating that the article was actually deficient in attribution, (2) suggesting particular articles, authors, or bodies of work, or (3) guiding authors to add citations from the other journals.

Furthermore, the work of Wilhite and Fong indicates that many journal editors appear to even strategically target certain authors, such as associate professors, rather than full professors, relying on the fact that lower ranking authors may be more willing to add the unnecessary citations. They also found that while the majority of authors disapprove of the practice, most acquiesce and add citations when coerced.

"This type of behavior hurts all of academia," said Dr. Fong, " and affects the integrity of academic publications."

"We hope this research brings this unethical practice to light. If left unchecked, it could distort our understanding of journal quality and research impact and, over time, influence decisions about tenure, promotion, awards and funding. Importantly, it is adding to the pressures faced by vulnerable junior faculty who are trying to build a record for tenure," said Dr. Caron St. John, Dean of UAH's College of Business Administration.