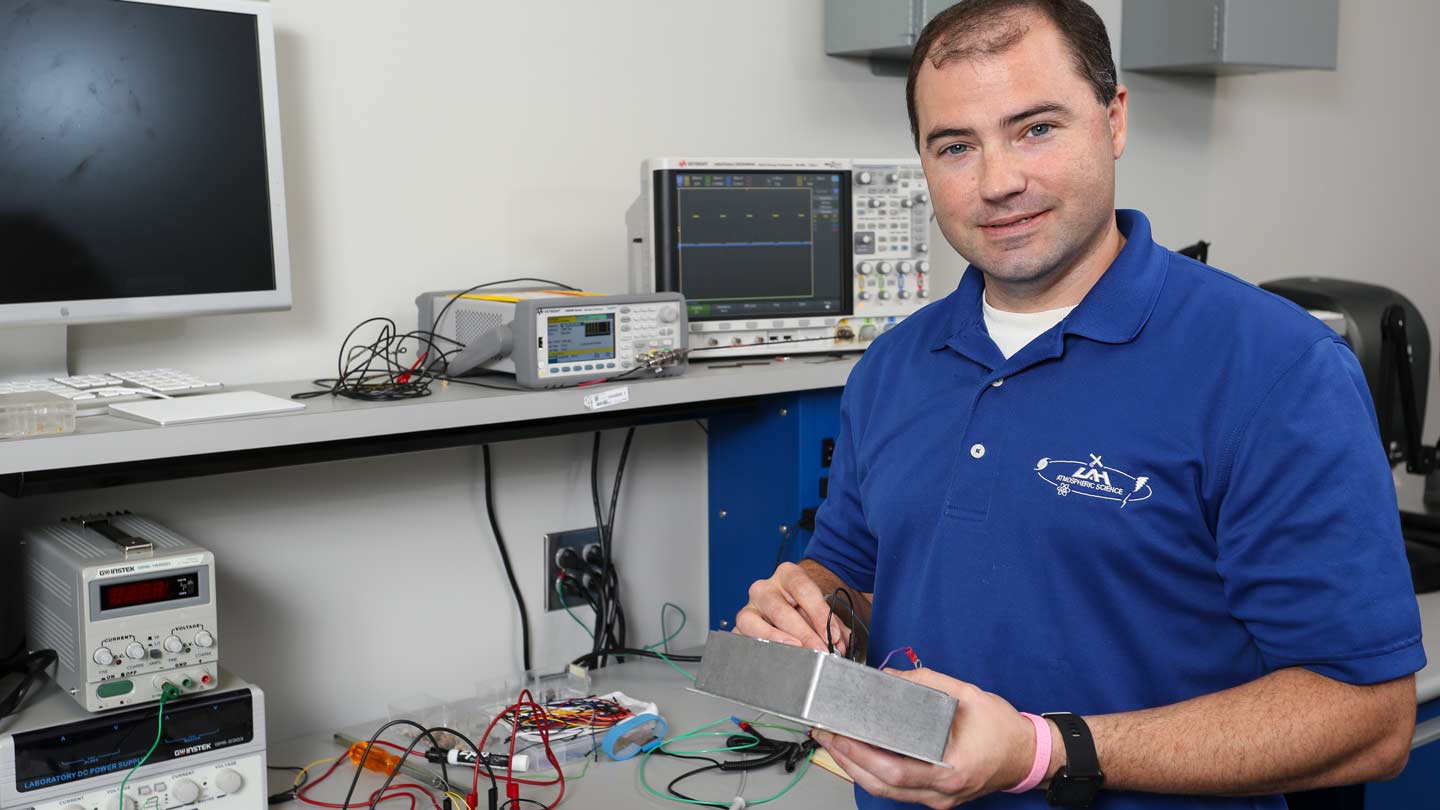 Dr. Phillip Bitzer, an associate professor in the Department of Atmospheric Science at The University of Alabama in Huntsville (UAH), received a five-year, $705,332 National Science Foundation (NSF) Faculty Early Career Development Program (CAREER) award to fund his research into the development of wideband, integrated instrumentation to investigate the electrical properties of lightning.

"This award is a great chance to do exciting research and introduce a new generation of future scientists to instrument development," says Dr. Bitzer, who spent this past summer in Panama studying the interaction between lightning and trees on the island of Barro Colorado. "We’ve been fortunate to work with outstanding scientists and engineers at UAH and NASA and with other colleagues to develop novel lightning instrumentation. The NSF CAREER will allow us to continue to develop new, cutting-edge instruments. In addition, we will be able expand our collaboration with local schools to further STEM education."

After earning both his master’s and doctoral degrees in physics from UAH, Dr. Bitzer first served as a research associate with the university’s Earth System Science Center before joining the faculty of the Department of Atmospheric Science and the research staff of UAH’s Earth System Science Center. Since then, his focus has been on trying to better understand the underlying nature of how lightning works through the development and use of instruments like the Huntsville Alabama Marx Meter Array (HAMMA), which can "see" the processes in lightning that produce large-scale changes in current, and the Lightning Imaging Sensor and Geostationary Lightning Mapper, which can detect lightning from space.

Now, with this NSF CAREER award, he will be able to carry that research one step further, by developing instrumentation capable of making measurements of the fundamental energetic properties of lightning. "Our goal is to investigate details of lightning leader physics and the application of lightning energetics to the production of severe weather in the hopes of enabling novel scientific investigations," he says. "This proposed instrumentation would not only greatly enhance the existing infrastructure, but would also provide a unique facility that would be available to other researchers and enable multidisciplinary investigations including, but not limited to, the fields of atmospheric electricity, meteorology, and physics."

Building on Dr. Bitzer’s previous experience developing the HAMMA, the new sensors will be able to measure radiation in the bands of <1 Hz to 400 kHz, ~100 kHz to 5 MHz, and DC to 5 Hz through the use of electric field change meters and electric field mills. "The high bandwidth will be used to determine current impulse discharges and the lower bandwidths will be used to find the charge neutralized during a lightning flash," he explains. "This configuration has the benefit of being able to simultaneously sample fast, impulsive discharges, such as return strokes and K-changes, and slower electrostatic changes."

The instrument will then be deployed in a formation tentatively named the North Alabama Marx Meter Array, with each site comprising an analog front end with a field mill sensor in the center surrounded by two concentric rings. "An advantage to this design is that it is a single integrated instrument capable of simultaneously measuring changes in the electric field and the ambient field," he says. "Such an instrument does not exist commercially."

Because the instrument will also provide higher fidelity measurements than those typically used, researchers will be able to both find the charge neutralized by lightning processes and determine the time evolution in the electrical energy dissipated by lightning. "When used in conjunction with the existing lightning mapping array and dual-polarization Doppler radars, it will provide detailed, comprehensive information for the study of electrical generation, electric field structure, and lightning processes," he says. "This will lead to both a better understanding of electrification physics and the use of lightning observations for severe weather monitoring and forecasting."

That’s important not just from a scientific perspective, but from a societal one as well. According to the National Oceanic and Atmospheric Administration, lightning is second only to floods when it comes to weather-related fatalities in the U.S. "There is a need to provide fundamental lightning research that goes beyond implementations that show only lightning data, because the threat of lightning begins well before the first flash is detected," says Dr. Bitzer. "This work will challenge the tendency to rely on indirect measurements of the electrical energy or the assumption that the lightning electrical energy dissipated is constant per flash and instead lead to an improved understanding of the relationship between severe weather and lightning."