HUNTSVILLE, Ala. (January 13, 2012) - Dr. Jim Simpson and Dr. Yeqing Bao look at things a little differently than most. 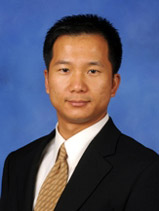 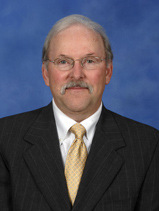 They typically visit China once or twice a year to recruit business students to The University of Alabama in Huntsville. While there, they visit industries, speak to business executives and lecture at some of the most prestigious universities in China.

But their minds never seem to stray far from their natural academic curiosity. It's that passion that led Bao and Simpson - professors in the College of Business Administration - to compile groundbreaking research that is serving as a road map for how developing countries like China can most effectively market their products in developed markets such as the United States.

"As the Chinese market became more sophisticated, we started to notice more product advertisements on billboards in the airports and in other areas," Simpson said. "We became interested in assessing how different marketing techniques might impact the sale of Chinese products in the American market."

Simpson also noted that the current marketing research has focused on how to market American products to international markets rather than the reverse.

Simpson and Bao used a variety of scenarios in their research. They evaluated the use of Western sounding product names in the marketing process, compared to Asian sounding product names. They also reviewed the affect of celebrity spokespersons - both American and Asian - on American's perspective of the Chinese products. They further considered whether an unrecognizable American or Asian spokesperson swayed opinions.

Their research has been presented at academic conferences in the U.S., Europe, and Asia and has been published in two books. They have become the go-to experts for developing countries seeking advice about successfully promoting products in the United States.

"For many years, research has revealed that American consumers consider products made in developing countries such as China, the Philippines, India and Mexico to be inferior to American products," said Simpson, Distinguished Professor Emeritus and Principal Research Scientist at UAHuntsville. "It's an obstacle developing countries continue to face."

Simpson called Bao "the brains behind" the project. As a graduate of Tsinghua University in China, he has first-hand knowledge of issues facing Chinese industries that want to market their products in America and other western countries. Both men have spent numerous hours over the past five years researching a variety of marketing strategies and evaluating the results.

"There are many factors to consider when a firm from a developing country attempts to market its product in the U.S.," said Bao, Associate Professor of Marketing and Director of International Programs in the College of Business Administration. "With most American consumers perceiving products from developing countries to be inferior in quality, some companies avoid listing the country of origin on their product promotions. Some foreign companies, however, want to use their existing brand name because those companies - like Samsung, for instance - have evolved and become a premier brand name in the U.S.. Some firms want to grow their brand into a world powerhouse."

Bao said a major component of their research is designed to examine marketing strategies for other products that might not be as well known as Samsung.

Simpson and Bao surveyed about 400 students at UAHuntsville and The University of Alabama. The students were given magazines developed by the researchers and asked to browse it as if they were waiting in a doctor's office. They were not told in advance what they would be asked afterwards, what product they were evaluating, the brand name or country origin. In this case, the advertisement Bao and Simpson were most interested in involved a wristwatch.

A variety of combinations were used in the experimental advertisements. For instance, an American sounding brand name such as Eagle was used as was an Asian sounding brand name such as Mingda. The country of origin was used in some ads and eliminated in others. Western celebrities such as Tommy Lee Jones were used as a spokesperson for the product in some cases and an unidentifiable American was used in others. In some advertisements an Asian celebrity was used, and in other scenarios no spokesperson was included.

Simpson said U.S. law mandates that a product's place of origin is listed on the product (usually on the product label), but the country of origin is not required on an advertisement. He added that companies from developing countries are learning more about the best way to market their products in America.

"Following their review of the magazine, we asked the students their perception of product quality based on advertisements they saw," Simpson said. "Our goal was to determine the most appropriate combination of brand name, spokesperson and country of origin information for marketing products from developing countries in the American market. In other words, if a firm from a developing country wants to advertise its product in the U.S. market, what is the best way? Our findings should be of interest to companies wanting to do business in the United States."

One example of the results of their research is that firms wanting to continue using a foreign brand name in its advertisements should not use a spokesperson in the ad, according to Simpson. "In that scenario, American consumers tend to evaluate advertisements without a spokesperson more favorably," Bao said.

Simpson said including the country of origin is OK in those situations, but consumers "become a little uncomfortable when evaluating an advertisement with a picture of an American celebrity, a foreign brand name and the foreign country of origin.

"The slightest discomfort in an advertisement creates a lower evaluation."

"We have developed an interesting concept that people haven't thought much about," Simpson said. "We think this experiment has produced valuable and helpful information."

Simpson and Bao agree that the world market is changing in many areas, and their work is not complete on this topic.

"We're finding that the perception of quality of products from China may be changing among American consumers," Simpson said. "It's harder to determine what it means to be 'made in China.' "

Bao said some results discovered in the research were not "as clear cut as we anticipated." "Over the years, China's overall economy has improved and the quality of its products is going up," he said. "The perception of Japanese products 40 years ago was that they were not high quality. That has definitely changed. This same phenomenon may occur for Chinese products in the future."

That is an issue they want to know more about as their research continues to evolve. They also hope to expand the evaluation process to other countries like Mexico.

"This is pretty important stuff, and we're anxious to learn more."