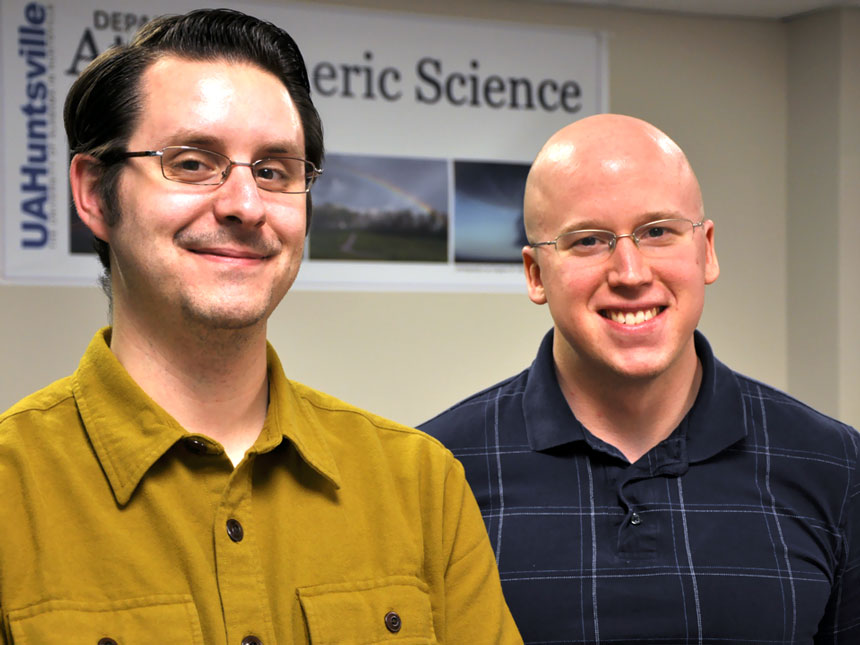 Research by Dr. Ken Leppert and Todd Murphy with UAH faculty (and one NASA scientist) may lay the groundwork for developing tools to give better predictions of both hurricanes and tornadoes.

Leppert, who has completed the requirements for his Ph.D. and is a postdoctoral fellow, found that certain traits that can be seen from space might help give earlier warnings of which low pressure systems coming out of Africa or South America are more likely to develop into tropical storms or hurricanes.

He found that for storm systems moving out of Central or South America into the Pacific Ocean the key factors are both size and intensity, which is gauged based on the number of lightning flashes seen by satellite instruments. Storms that are larger and have more lightning are more likely to develop into hurricanes.

For storms coming out of Africa into the Atlantic Ocean, however, lightning is less of an issue while the key factor is the size of the storm: Larger storms are more likely to develop into hurricanes.

Murphy's MWR paper is from a piece of his doctoral dissertation. His research verified that the "synthetic dual Doppler" technique can be used to study some powerful storm cells that generate tornadoes. That might significantly increase the number of storms that can be studied to help scientists find clues or traits that could be used to make earlier or more accurate tornado forecasts.

While looking at a storm from two or more angles using multiple Doppler radar units can provide valuable information about how storms develop, there aren't many places with adequate coverage by two or more advanced radar sites. Several years ago, scientists learned that is cases where a storm system is stable enough they can get an artificial stereoscopic view by looking at storm from different angles as it moves through the radar's service area.

For instance, scientists might collect data from a thunderstorm that is due west of the radar, then again when it is northwest of the radar site. If the storm has not changed too much from one view to the next, those two images can be combined to create a faux 3D view that might provide valuable information about how these powerful storms evolve.

The storm that Murphy studied passed through Tennessee on Feb. 5-6, 2008, part of the "Super Tuesday" tornado outbreak that spun off at least 87 confirmed tornadoes killing 57 people and causing more than $1 billion in damage. His work is the first detailed analysis of a winter season, cold weather supercell storm.