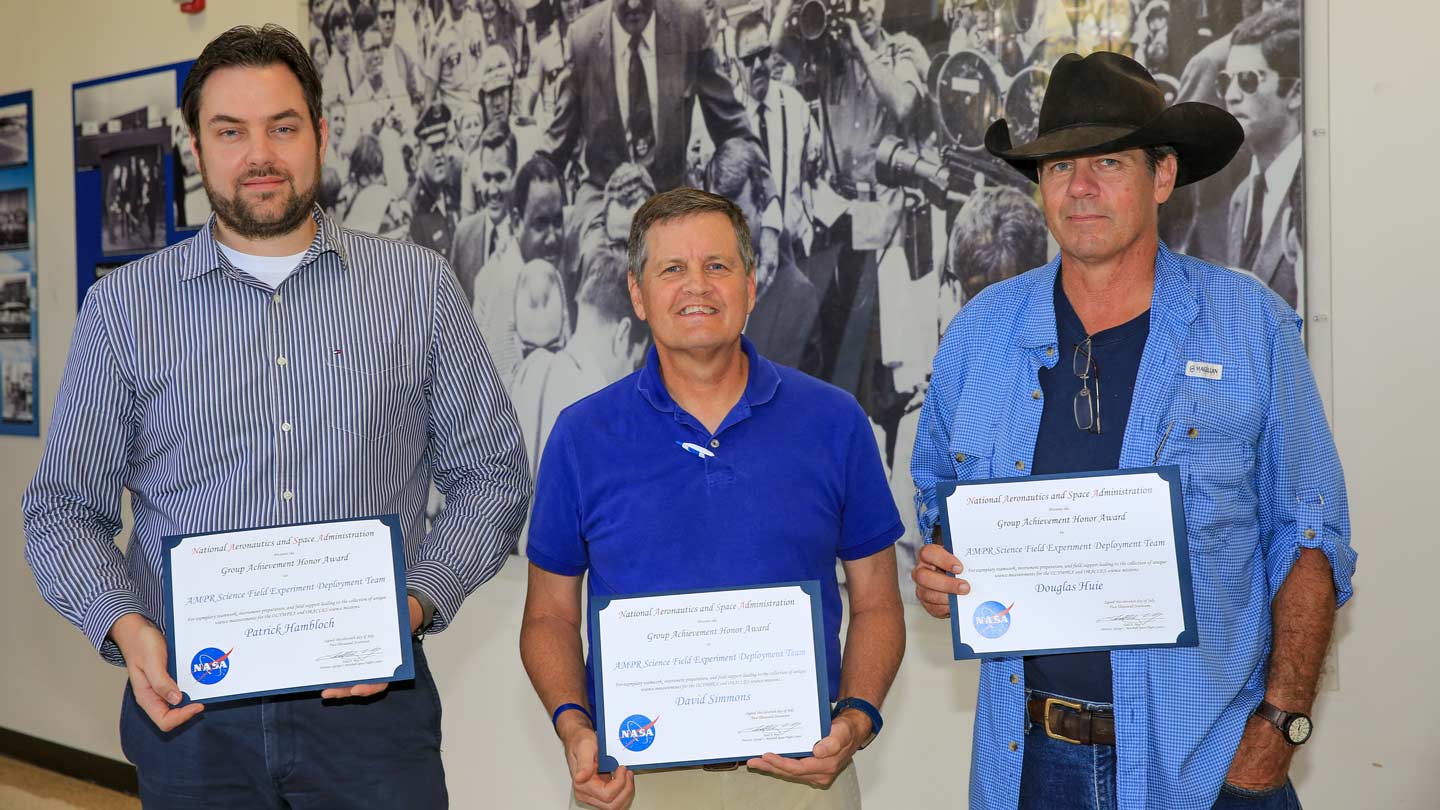 Three researchers at The University of Alabama in Huntsville (UAH) – Dave Simmons, Doug Huie, and Patrick Hambloch – were each presented with a NASA Group Achievement Honor Award, which recognizes those individuals who have distinguished themselves by making outstanding contributions to the Agency’s mission. All three work at the Rotorcraft Systems Engineering and Simulation Center (RSESC), which supports government and industry partners with capabilities that include systems engineering, design and system analysis, rapid prototyping, integration, and fabrication.

The trio was recognized for their "exemplary teamwork, instrument preparation, and field support leading to the collection of unique science measurements for the OLYMPEX and ORACLES science missions."

OLYMPEX, or the Olympic Mountain Experiment, was a 2015-2016 NASA-led field campaign that took place on the Olympic Peninsula in Washington. Its purpose was to collect and assess atmospheric measurements to determine how well satellites measured rainfall and snowfall from space. ORACLES, or Observations of Aerosols Above Clouds and Their Interactions, is a five-year study comprising three observation periods to understand the impact of biomass burning aerosol particles produced by Southern Africa on the global climate.

Integral to the success of both of these missions is the Advanced Microwave Precipitation Radiometer (AMPR), which is flown aboard the NASA ER-2 (U-2), DC-8, and P3. A total power passive microwave radiometer, the AMPR produces calibrated brightness temperatures at 10.7, 19.35, 37.1, and 85.5 GHz; these frequencies are sensitive to the emission and scattering of precipitation-size ice, liquid water, and water vapor.

"We help with any modifications needed to the instrument’s design or its data system," says Simmons, a principal research scientist at the RSESC. Both he and Huie, a research engineer, have been supporting NASA initiatives since the late 1980s. Hambloch, also a research engineer, joined the pair two years ago. "Patrick has been doing the testing," says Simmons. "He will go up on the aircraft with the instrument to support it while it collects data."

Last year, Simmons and Hambloch spent three weeks in Namibia during one of ORACLES’ intensive observation periods. "Taking part in the mission meant a lot of work and long days, but being part of the science group was very interesting and rewarding at the same time," says Hambloch, who was also recognized as a Young Space Leader at the International Astronautical Federation’s 2017 meeting in Adelaide, Australia, last month. As for the group achievement awards their efforts yielded, Simmons says it was "nice recognition" of the hard work and tight deadlines involved. "There’s a lot of hustling that goes on it to get it all done on time!"

As they wait to hear whether they will be taking part in next year’s ORACLES observation period, the trio is staying busy with other projects for both NASA and the U.S. Army. Among them will be an almost month-long trip to the Philippines for the CAMP2Ex mission in late 2018, which will study aerosol and land use impacts on monsoonal precipitation.