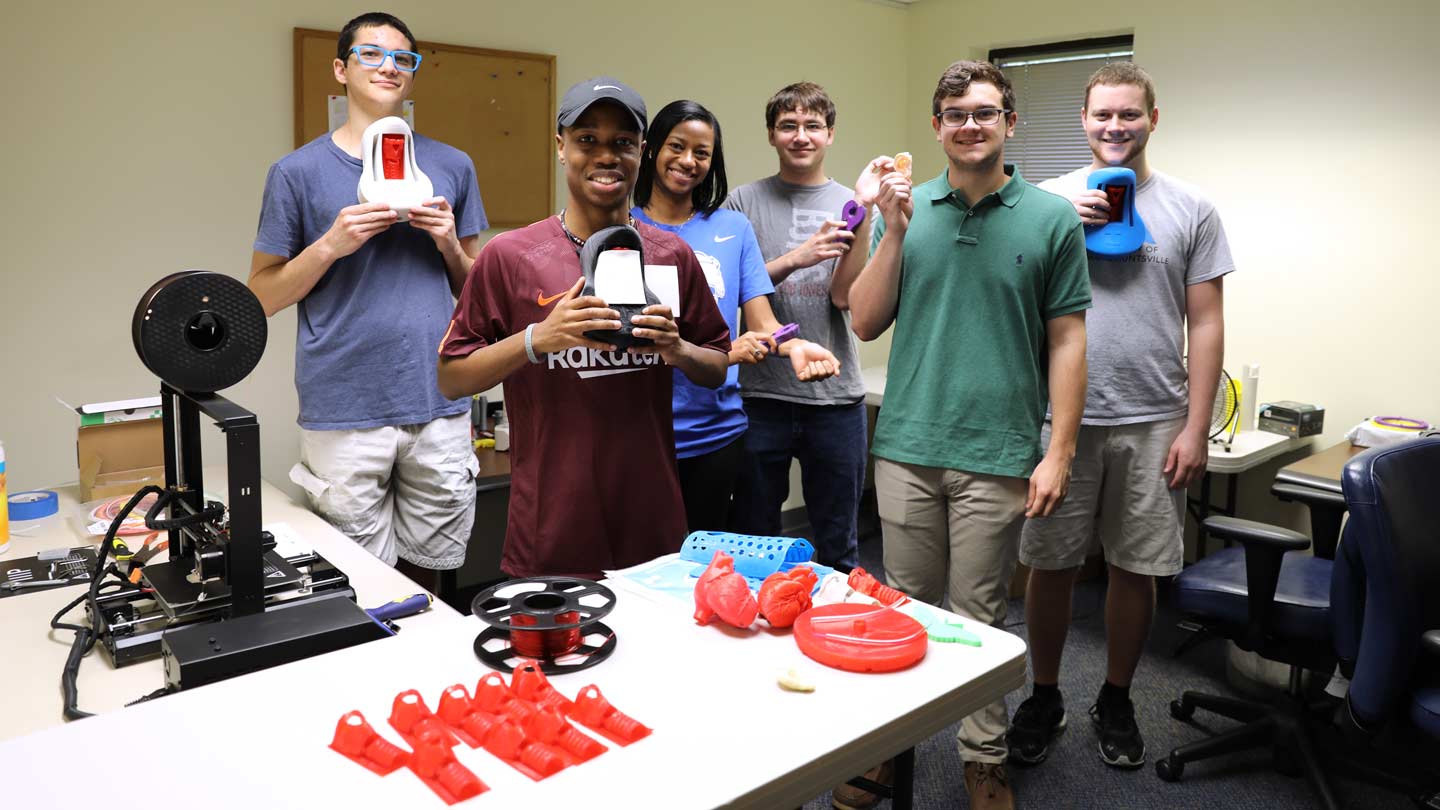 As a regular attendee of conferences on healthcare simulation around the world, Dr. Lori Lioce was already well aware of the growing trend of using 3-D printing to create task trainers – clinical simulators that allow nursing students to repeatedly practice a specific skill in preparation for providing healthcare in the real world. What she needed was access to the technology.

So the clinical associate professor in the College of Nursing at The University of Alabama in Huntsville (UAH) turned to Norven Goddard, a research scientist at UAH’s Systems Management and Production (SMAP) Center, for help. "Norven mentioned that the SMAP Center has six 3-D printers," says Dr. Lioce, who also serves as the executive director of the College’s Learning and Technology Resource Center. "So I gave him a long list of what we needed and a bag of samples, and we collaborated on what he and his students could print."

They decided to start with a cricothyrotomy trainer, which is used to teach nurses how to perform an emergency procedure to clear the airway when more traditional methods are ineffective. While the procedure is not typically part of the undergraduate nursing curriculum, the trainer is one the few whose digital design files are available on the open-source platform Thingiverse.

"These models cost more than a thousand dollars, but we wanted something that would save money, be cost effective, and use the university’s resources," says Goddard. "We asked ourselves, how cheaply can we do this?" To help, Goddard recruited a dream team of 3-D printing specialists made up of the Center’s undergraduate student interns: engineering majors James Tovar, Marquis Myler, Nicholas "Gage" Swinford, Martavia Lucious, and Andrew Farris, and computer science major Matthew Daigle. 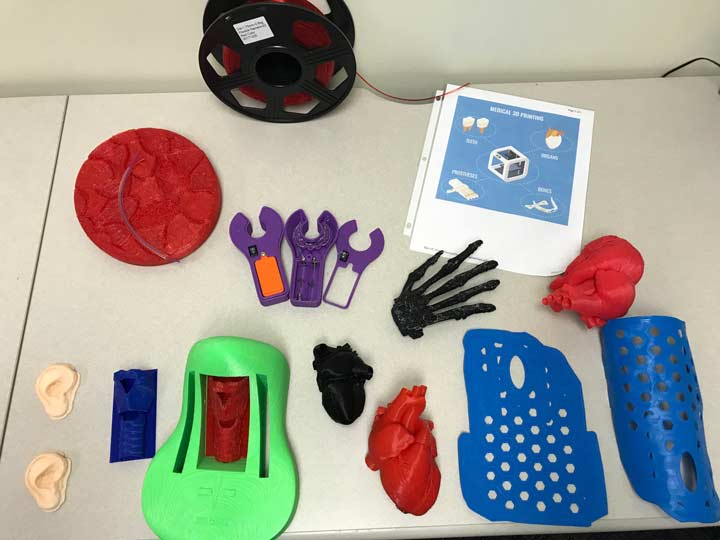 A selection of training items that have been 3-D printed as part of a collaboration between UAH’s College of Nursing and its Systems Management and Production Center.

After the students downloaded the necessary digital design files for the cricothyrotomy trainer, Dr. Lioce says she worked with them "to get the right texture and strength." Three prototypes later, she beams, "we got the right one!" The total price? $15. "Now we are using four of them in our class, with a savings of $6,000," she says. She’s also integrating the team’s 3-D printed vein finders, portable devices that use LED lights to help nurses locate difficult-to-find veins. Normally hundreds of dollars, Goddard says they were able to build them "for $6 using open-source design files."

Next up is an onychectomy trainer. Used to teach nurses how to remove a thumbnail, the team’s 3-D printed version will directly save $33 for each nurse practitioner student in the program. After that, they plan to tackle an injection pad, which is used to simulate injections. "With that we’re going one step further – we’re looking at injection molding," says Goddard, adding that all of the students are involved in at least some part of the processes used to create these trainers. "We’re trying to cross-pollinate so everyone knows how to 3-D print, injection mold, solder, use the software, and do whatever else is needed." Another idea they’re "toying with," he says, is converting MRIs to 3-D models to help surgeons prepare for and practice operations. "We sit down with Lori every once in a while and ask, what’s next?"

Dr. Lioce, for her part, is thrilled about what they’ve already accomplished. "We’ve been able to substantiate a significant cost savings," she says." Now she’s hoping the collaboration between the College and the SMAP Center can be formalized and expanded, for two reasons. First, it offers a quick, cost-effective alternative to purchasing expensive, brand-name task trainers. And second, it benefits the students involved by exposing them to completely different fields of study, improving communication between fields and creating a synergy that can, in turn, lead to more advances.

"Diversity of thought and science stimulates needed growth and solutions," she says. "It’s precisely because we think differently that we are innovative together."