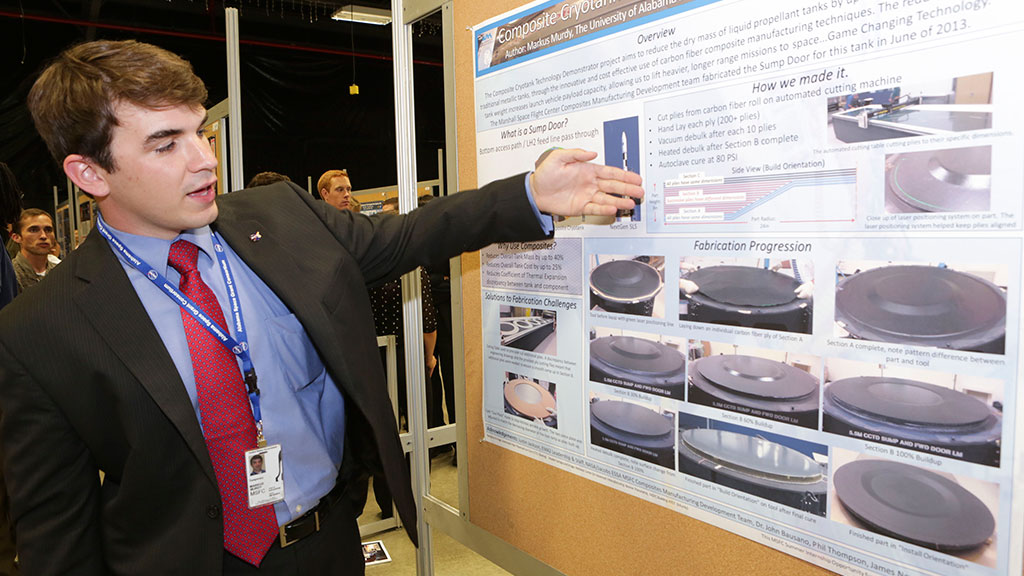 HUNTSVILLE, Ala. (March 27, 2014) – A University of Alabama in Huntsville (UAH) undergraduate student will be closely watching as a huge composite fuel tank he worked on is unloaded tomorrow from NASA's Super Guppy aircraft to undergo a series of structural and pressure tests.

"Two Jacobs ESSA contractors and I did the hand-fabrication of the door that goes at the bottom of the tank," Murdy says. "This tank is unique because the type of composite used does not require an autoclave cure, reducing manufacturing costs. Also, the joints are full composite-to-composite joints. This allows the tank to be made lighter and cheaper."

If education is about being ready to walk through the industry door when it opens, then the opportunities at UAH through Space Hardware Club and Alabama Space Grant Consortium have definitely prepared me for that.

The Composite Cryotank Technology Demonstration (CCTD) is aimed at reducing the dry mass of liquid propellant tanks by 40 percent by using state of the art carbon composite materials. It measures 18 feet in diameter. It will be unloaded for testing from NASA's aircraft at Redstone Army Airfield. Once installed in MSFC's test facilities, the composite cryotank will undergo a series of tests at extreme pressures and temperatures, similar to those experienced during spaceflight.

"My work this past summer was a dream come true," Murdy says. "In engineering today it can be very easy to get stuck in a perpetual design/computer phase. To see one of the world's largest composite cryotanks – with an American flag and components that I actually built – arrive for structure and pressure testing at Marshall is a huge motivator to me to continue studying and working in this industry."

He attends UAH because it offers him the opportunity to be close to the aerospace industry and NASA due to its location in Cummings Research Park, its proximity to Redstone Arsenal and its working relationships with aerospace firms, Murdy says.

"If education is about being ready to walk through the industry door when it opens, then the opportunities at UAH through Space Hardware Club and Alabama Space Grant Consortium have definitely prepared me for that," he says. "Opportunities like this are a result of lots of people behind the scenes supporting student engineering organizations.