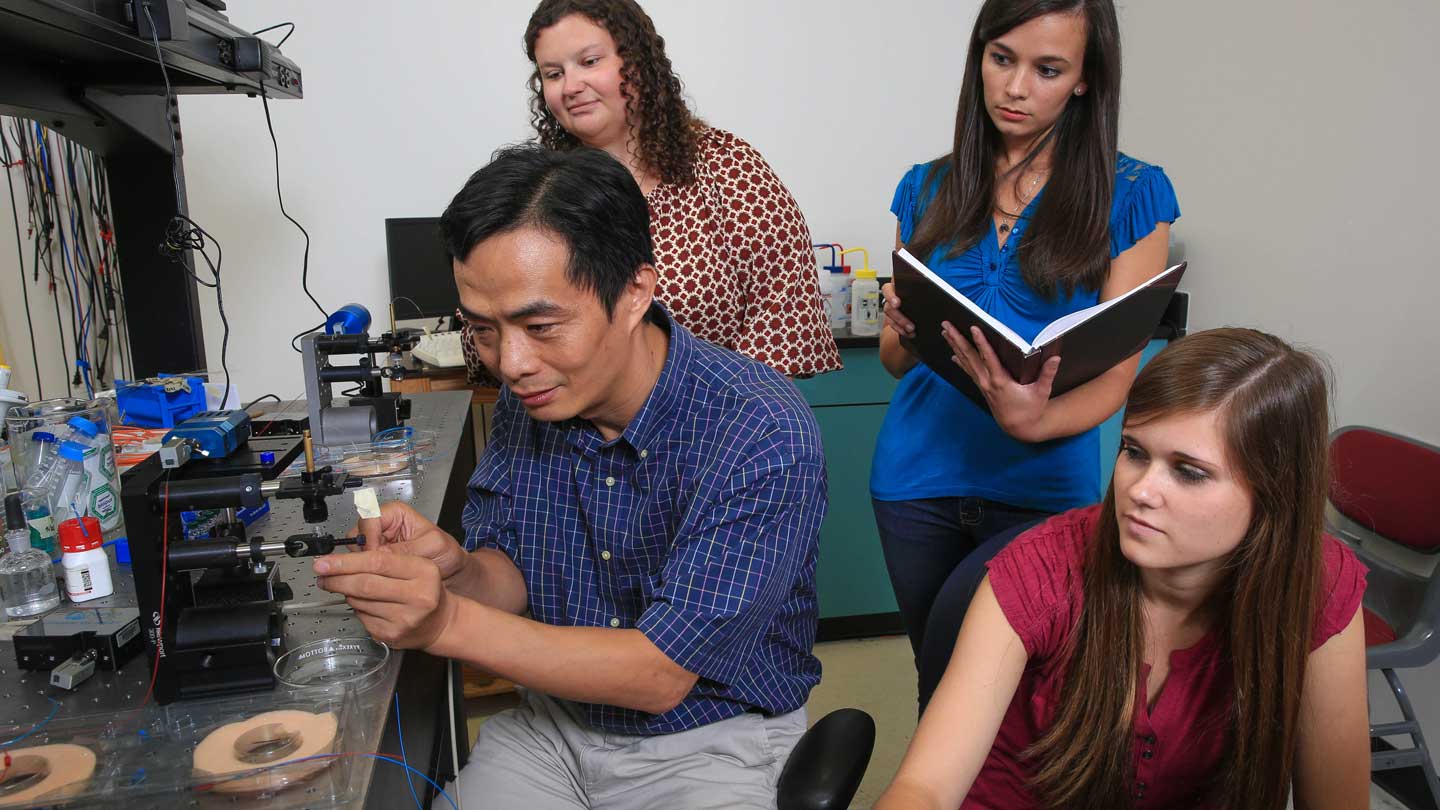 From left, Taylor Bono, Dr. Yongbin Lin, Mollye Sanders and Savannah Kaye discuss the supersensitive nanoprobe sensor they have been developing in a lab in UAH's Optics Building.

Extremely early detection of cancers and other diseases is on the horizon with a supersensitive nanodevice being developed at The University of Alabama in Huntsville (UAH) in collaboration with The Joint School of Nanoscience and Nanoengineering (JSNN) in Greensboro, NC.

The device is ready for packaging into a lunchbox-size unit that ultimately may use a cellphone app to provide test results.

"We are submitting grant applications with our collaborator Dr. Jianjun Wei, an associate professor at the JSNN, to the National Institutes of Health to fund our future integration work," says Dr. Yongbin Lin, a research scientist at UAH's Nano and Micro Devices Center who has been working on the nanodevice at the core of the diagnostic unit for about five years. "In the future, we will do an integration of the system with everything inside a box. If we get funding support, I think that within three to five years it may be realized."

The sensitivity of the equipment holds promise for finding cancer at a very early stage, even while it is at the small cluster of cells level, says Dr. Lin. "At that stage, it is easier to treat."

In the future, we will do an integration of the system with everything inside a box. If we get funding support, I think that within three to five years it may be realized.

One such test detects minute levels of Interleukin-6 (IL-6) in the bloodstream. IL-6 is secreted by the body's T-cells and macrophages to stimulate inflammatory and immune responses.

"If you have a cancer, then your basic level of IL-6 will increase," Dr. Lin says. "A lot of cancers have links to IL-6." Heightened IL-6 also could signal inflammation indicating the presence of other conditions. The scientists are also developing tests for Prostate Specific Antigen, an indicator of prostate cancer, but the device could be calibrated to test for any protein antigen biomarkers.

Once packaged, the portable device will be ideal for point of care use, Dr. Lin says, providing quick results without the need for a testing laboratory.

"We don't have to send your blood sample anywhere. We just bring this to your bedside."

It especially would be a boon for countries that have limited medical facilities and budgets, he says, where the testing equipment could be valuable in fighting disease outbreaks like the Ebola virus in West Africa.

"This could work in that situation," Dr. Lin says. "We'd just have to find a specific antigen for that virus."

A nanoprobe that's 125 microns in diameter with gold nanodots on a 4-micron fiber core is at the heart of the machine.

Each gold nanodot looks like a disc and is 160 nanometers in diameter, says Dr. Lin. That's too small for the human eye to see - in fact, the nanoprobe has to be assembled using an electron microscope. The probe is coated with a biochemical link so that specific antibodies for the particular test will attach to it.

"We use each antibody because it has the ability to bond to its specific antigens. Once the antibody binds to it, we can test for the amount of antigens present," Dr. Lin says. That test is based on light refraction from antigens bound to the antibodies on the nanoprobe.

"The properties of the nanoparticles will give you a resonance shift upon a biological binding reaction," Dr. Lin says. The fiber optic strand on which the sensors are attached directs the resulting light waves to a spectrometer and a computer determines the test result.

"It's personalized medicine but it's also a form of preventative medicine," says Taylor Bono, a UAH senior from Madison who is pursuing a medical career and has helped with the research.

Until the packaging and integration work is funded, the testing equipment resides on the corner of a workbench in a lab in the UAH Optics Building. Early tests involved identifying DNA profiles before the research evolved into antigens.

Bono did some of the early sensitivity testing work along with UAH senior Molly Sanders of Huntsville, who is an undergraduate concurrently working on her master's degree in biology as part of UAH's Joint Undergraduate Master's Program (JUMP).

"Even though I was unfamiliar with physics, I could help with the biological side of it. I never would have known anything about this if I hadn't had this opportunity," says Sanders. The two worked together in 2013 with Prostate Specific Antigen solutions to determine the device's sensitivity. Sanders is the principal author and Bono an author of a paper about this research.

"The most significant aspect of the device medically is that it can detect trace levels of cancer biomarkers in the blood," Sanders says.

The lab work is now the responsibility of UAH junior Savannah Kaye of Lebanon, Penn. "I test the nanoprobe tip in two different solutions to see if antibodies will stick to it," she says.

UAH Associate Vice President for Research Dr. Robert Lindquist, the former director of the Center for Applied Optics, was an early contributor to the research, Dr. Lin says. "He is a strong supporter of this project."