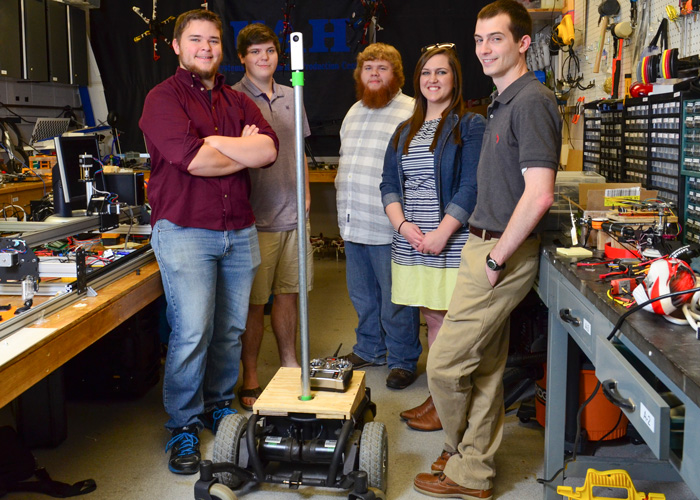 SMAP student employees with the robot they made from a wheelchair and named Johnny Five. From left are Jean-Luc Burhop, Jared McArthur, Benjamin Christa, Jessica Sisk and Derek Johnson.
Zita McCall | UAH

HUNTSVILLE, Ala. (April 15, 2014) - Talk about your Craigslist finds! A team of student employees at The University of Alabama in Huntsville's Systems Management and Production Center (SMAP) combined inspiration with innovation to make a $250 motorized wheelchair do the work of a $20,000 robot.

As its first official task, a remote-controlled version of the robot built on the cheap photographed a room and interior catalog of UAH's new Charger Union building for inventory and insurance purposes for the university's Physical Plant Administration Department. Equipped with a Ricoh panoramic camera on a mast, the machine rolls into position and snaps the shot, which is stitched together in an app and viewable on a smartphone within seconds.

Presently the positioning of the robot, named Johnny Five by the students, is remotely controlled manually but the final design will incorporate a small onboard computer with the ability to operate in an autonomous mode incorporating preselected geo-referenced waypoints throughout the building. The goal is to update photo imagery from the same location consistently over a number of years.

"It's kind of like a photographic Roomba," says SMAP principle research scientist Norven Goddard. "We can just set it out there and it knows where to go all by itself."

It all started when SMAP was brought in by the Jackson County School system to do 360-degree panoramic photography of school interiors as part of the Alabama School Safety program that requires interiors to be mapped in the Virtual Alabama Visual Display System for evacuation and safety purposes.

So SMAP principle research scientists Goddard and William Sabados joined their respective hardware and software teams into a five-person unit that developed a tripod that used four Go-Pro cameras. Complicated software developed by team members Jean-Luc Burhop, a sophomore from Madison, and Ben Christa, a junior from Hazel Green, stitched together a 360-degree view that was viewable through Google Maps.

It’s kind of like a photographic Roomba. We can just set it out there and it knows where to go all by itself.

"You could click on Google Maps and view any of the panoramas we'd taken," said Burhop. But it was time-consuming.

"We would spend between four and six hours per school," said team member Jessica Sisk, a senior from Jackson County. "The panoramas were not mandatory, but we did that as an extra." The views of the rooms can be helpful to firefighters, for example. Slowly, the Jackson County project got done.

"With the Charger Union being built, Kevin Bennett, the Physical Plant Administration planning and IT administrator, said why don't we photograph Charger Union?" Goddard said. The initial photos were done with the tripod system very soon after Charger Union was built.

Then SMAP director Dr. Gary Maddux tasked the team with developing a robot that could accommodate a variety of cargos on its mounts, like a small unmanned aerial vehicle, a camera or a Light Detecting and Ranging (LIDAR) scanner.

"We originally wanted something that would do a 360-degree turn on a dime," said team member Derek Johnson, a rising graduate student from Arab. But $20,000 was a steep price to pay for that capability. Then Sisk had her Craigslist inspiration.

"I just waited around here on a Saturday for the man to show up," said Goddard. "I paid him and we took delivery." The chair was stripped down to its undercarriage, the mast was attached and software to make its motor controllers remotely operate was developed by the team. A team member discovered the Ricoh panoramic camera, and inspiration met innovation.

After a few tests with the camera at the team's home base in Von Braun Research Hall and elsewhere, the bargain-basement device went to work. With Charger Union now fully furnished, the team used remote controls to position the robot to photograph the structure's interior. Next time, with the newly added computer and software, the robot will be able to do that by itself. But the team's not done yet.

"We're looking," said Sisk, "at being able to do this for police departments."