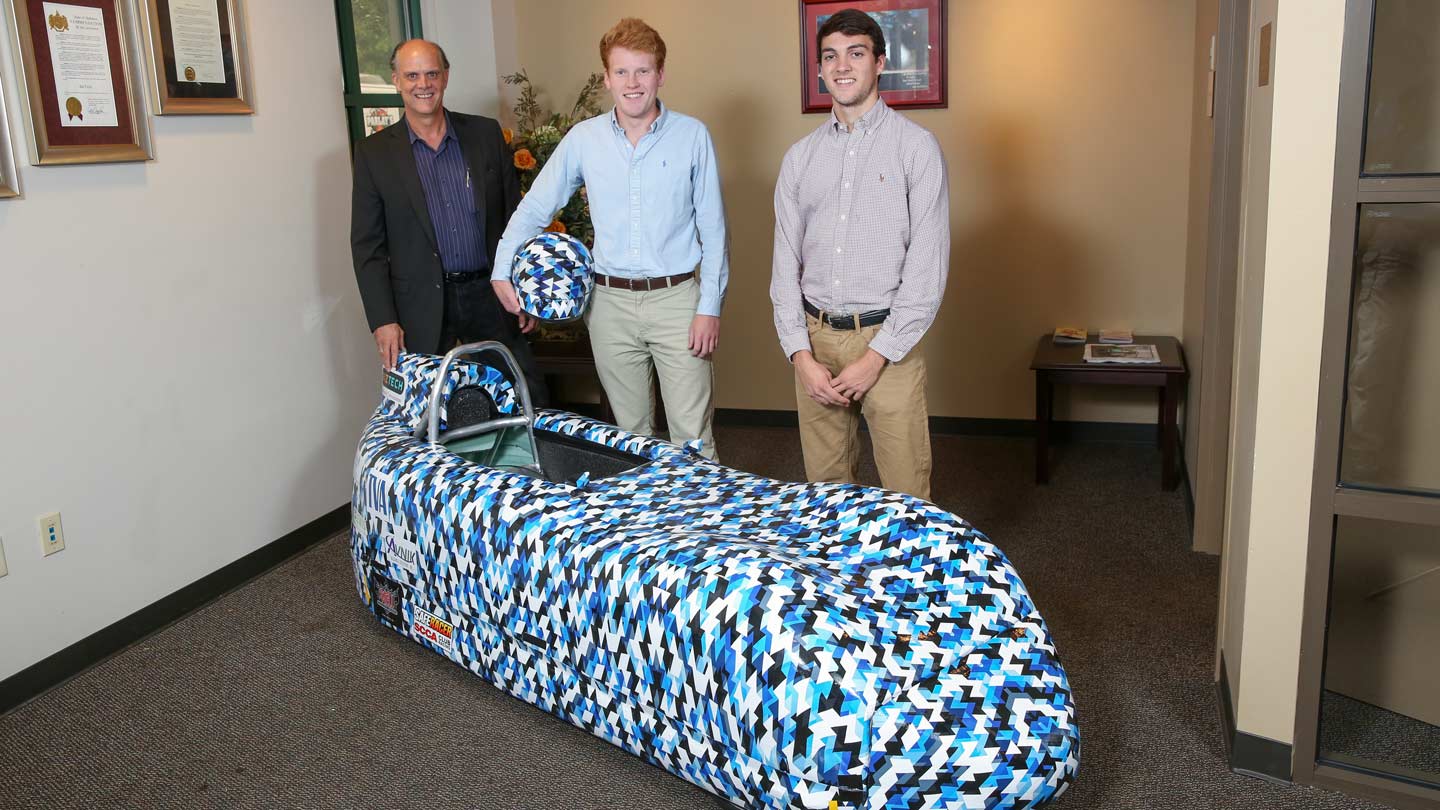 An electric racecar built by two students at The University of Alabama in Huntsville (UAH) will head overseas on Sunday, Sept. 27, to take part in the Greenpower 2015 International Finals Competition at Rockingham Motor Speedway in Corby, England.

In just about a month, UAH Electric Vehicle Team lead Nick Peterson, a 19-year-old junior studying mechanical engineering with a focus on aerospace, and crewman Will Cobb, a 21-year-old sophomore studying biology with a pre-med emphasis, built their vehicle. They finished design on July 25 and starting construction in Cobb's basement and garage on July 27, taking the first test drive on Sept. 5.

The car is scheduled to arrive at the racetrack Oct. 4, where it will be held in a garage. Peterson, Cobb and team advisor Dr. Bill Carswell, a UAH Research Institute principal research scientist, will fly to England Oct. 6 for the two-day race event Oct. 10-11, competing in four races at Rockingham.

"Will is going to drive two races and I will drive two races, while the other one is on the radio acting as the pit chief and bird's-eye for the driver," Peterson says. "Of the four races, two of them are going to act strictly as our practice because they are a high school-level competition so we are unable to win, but we are still going to drive in it since that is going to be the first time we will actually test-drive the car to its full ability."

The other two races are college- and corporate-level races, where the UAH team will compete against teams from Jaguar-Land Rover, Lockheed Martin, Renishaw, Bentley Motors and others. One of the races requires a 60-minute drive without refreshing or charging the battery or power source. The car with the farthest distance traveled in that race wins. The other race is a timed lap race, and fastest team wins.

"This means that the vehicle design comes down to four main things: weight, aerodynamics, electronics and motor system/gearing," says Cobb.

"Our biggest challenge was time," Peterson says. "We had to be confident in many of our decisions because we didn't have enough time to make many changes or use the trial-and-error method. Also, just like everything else, money was a huge challenge and still is but we are doing the best we can with what we have."

"Also, a car is not exactly the simplest thing to make, so there were many things we were not able to do in a basement with no machinery," Cobb says. "That usually caused us to tweak a design to make it as simple as possible, or to use a machine and help from one of our sponsors who owns a fabrication shop."

The two are no strangers to electric cars and the Greenpower event, having been involved as high school juniors in the Huntsville-based effort to field the first U.S. Greenpower electric racecar team.

"We pioneered the project and design, and by our senior year of high school we were able to travel to the United Kingdom and compete as the first international team in 2013," says Peterson. "The car we built in high school was called Ares and was originally the car for the Huntsville Center for Technology, where Will and I attended for a drafting and design course."

Mike Evans, president of the nonprofit GreenpowerUSA that was set up as a result of the Huntsville City Schools participation in the Greenpower UK events and the leader of the first U.S. Greenpower team, introduced Dr. Carswell to Peterson to spark interest in a UAH team.

"We have always had a passion for cars and designing, and we learned so much from building the first car in high school," Peterson says. "It was tough transitioning into college and having to leave that project behind, so we both always wanted to start our own."

"Next year, now that we have a registered student organization, we are going to actually engage more students and grow it into a campus-wide activity," says Dr. Carswell. "We kept it small this year just so we could get it done."