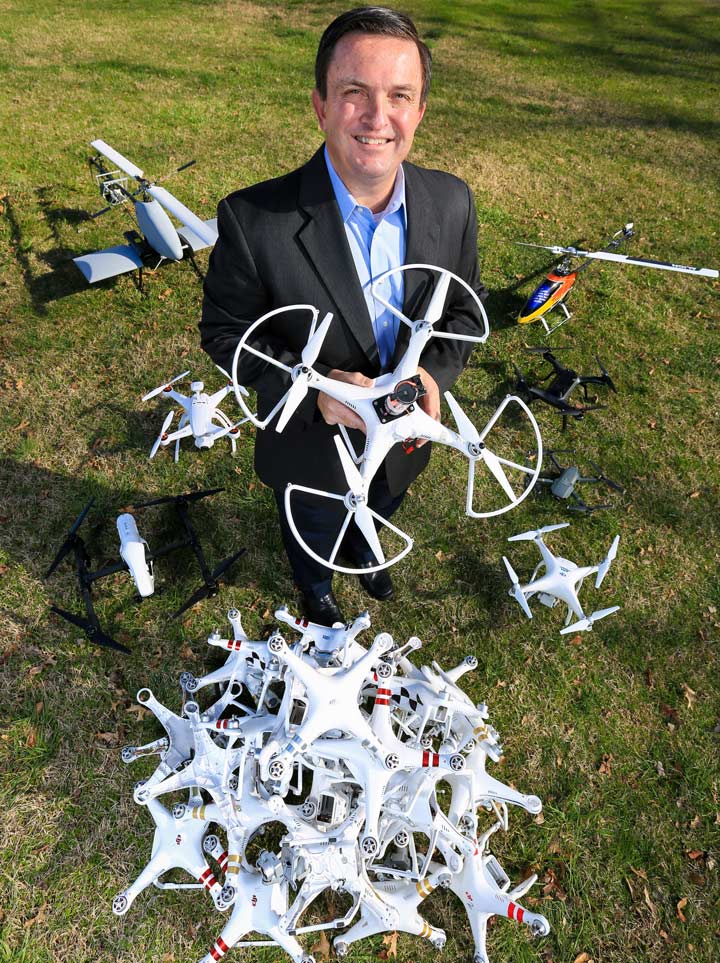 Small drones are safer to operate near people than originally thought, according to research results presented today by the director of the Rotorcraft Systems Engineering and Simulation Center (RSESC) at The University of Alabama in Huntsville (UAH) to members of the U.S. Congress and industry representatives from the Federal Aviation Administration (FAA) Drone Advisory Council.

RSESC Director David Arterburn briefed on Capitol Hill about key findings from research on ground collision severity of unmanned aerial systems (UAS). The research is part of efforts by the FAA Unmanned Aerial System Center of Excellence and the Alliance for System Safety of UAS through Research Excellence (ASSURE) to develop drone operational safety standards.

"Flight over people is the next step in the evolution of rule-making in the FAAs strategic plan. This is the first of a series of research efforts by the FAA UAS Center Of Excellence intended to inform the FAA and the public on the injury potential of small UAS (sUAS)," says Arterburn, who is the principal investigator for ASSURE on these tasks, coordinated the efforts of the five universities, coordinated with the FAA and directed the technical effort across all universities involved, and acted as principal manager for reporting and resource management.

"This report provides an initial framework for the appropriate safety assessment of the sUAS class of vehicles and evaluates what type of injury metrics are appropriate for establishing thresholds for levels of safety."

Currently, FAA Part 107, which covers sUAS vehicles that are commonly called drones ­and weigh less than 55 pounds, says operators must keep the craft within their line of sight and cannot fly over people who are not directly participating in its operation.

Arterburn’s meeting with Congressional staff occurred prior to the public release of the 2015-2016 research report, entitled "Final Report for the FAA UAS Center of Excellence Task A4: UAS Ground Collision Severity Evaluation." UAH is coordinating with the FAA, industry and other universities, both inside and outside ASSURE, for future research efforts on this topic.

"This research was fundamental in understanding both how sUAS can cause injury in terms of their physical properties, as well as understanding appropriate ways of measuring these characteristics in order to assess injury," Arterburn says.

"Furthermore, the team studied injury metrics from a variety of fields to determine whether commonly used metrics and standards from the military, automotive or toy industry, for example, were appropriate to be applied to sUAS," he says. "Testing was conducted to evaluate the injury potential of sUAS platforms that are made of unconventional materials such as plastic and foam, rather than metals, to assess the applicability of debris casualty standards applied by Dept. of Defense test ranges and space debris safety methods."

Testing showed that the injury potential arising from the kinetic energy of debris in a human-drone impact was smaller than that projected by debris casualty standards used by the national test ranges that previously were being applied to sUAS collision research, Arterburn says. That makes direct application of the debris standards used for the breakup of missiles or space vehicles inappropriate for use in defining standards for sUAS vehicles.

"sUAS come in a variety of sizes and shapes so we also came up with a method of assessing various vehicles from their concept of operations, the type of sUAS to be used and the injury potential of the vehicle, in order to determine if a vehicle was safe for a specific operation based on a specific level of safety with a specific sUAS selected," he says.

Researchers found that the collision dynamics of fixed wing vehicles vs. multi-rotors are very different due to their flight profile, failure modes, physical geometries and the materials from which they are made. These properties all play a role in the assessment of injury potential for these vehicles.

"The collision dynamics of these small vehicles is very different from metal objects," says Arterburn. "sUAS platforms are flexible and retain much of their energy, while inelastic metal fragments or objects transfer nearly all of their energy to a person."

To accommodate the variety of sUAS sizes and shapes, researchers are seeking to develop a simplified test method and an applicant flow chart for assessing each vehicle for a specific operation.

A retired Master Army Aviator with over 28 years in Army Aviation, Arterburn says his past experience gave him insight into failure modes and how to conduct the testing, but the complexity of the issue surprised him.

"Your intuition about falling objects and the physics of ballistics is challenged due to the lack of real data about sUAS platforms, how they fall following failure and how they react when they collide with people or property," he says. "They are not made of traditional materials so you can’t assess how a brick falls and collides with a human and say that is directly equivalent to a flexible, plastic drone of the same mass. Drag, terminal velocity, impact dynamics are all different."

"We could not have completed this work without the help of the entire ASSURE team assigned to this project. This was truly a team effort," Arterburn says. "The results of the research are but a first step in developing a clear understanding of appropriate metrics for flight over people and we hope to continue this effort soon to provide the FAA with additional test results and improved methods that support the growth potential of this industry."