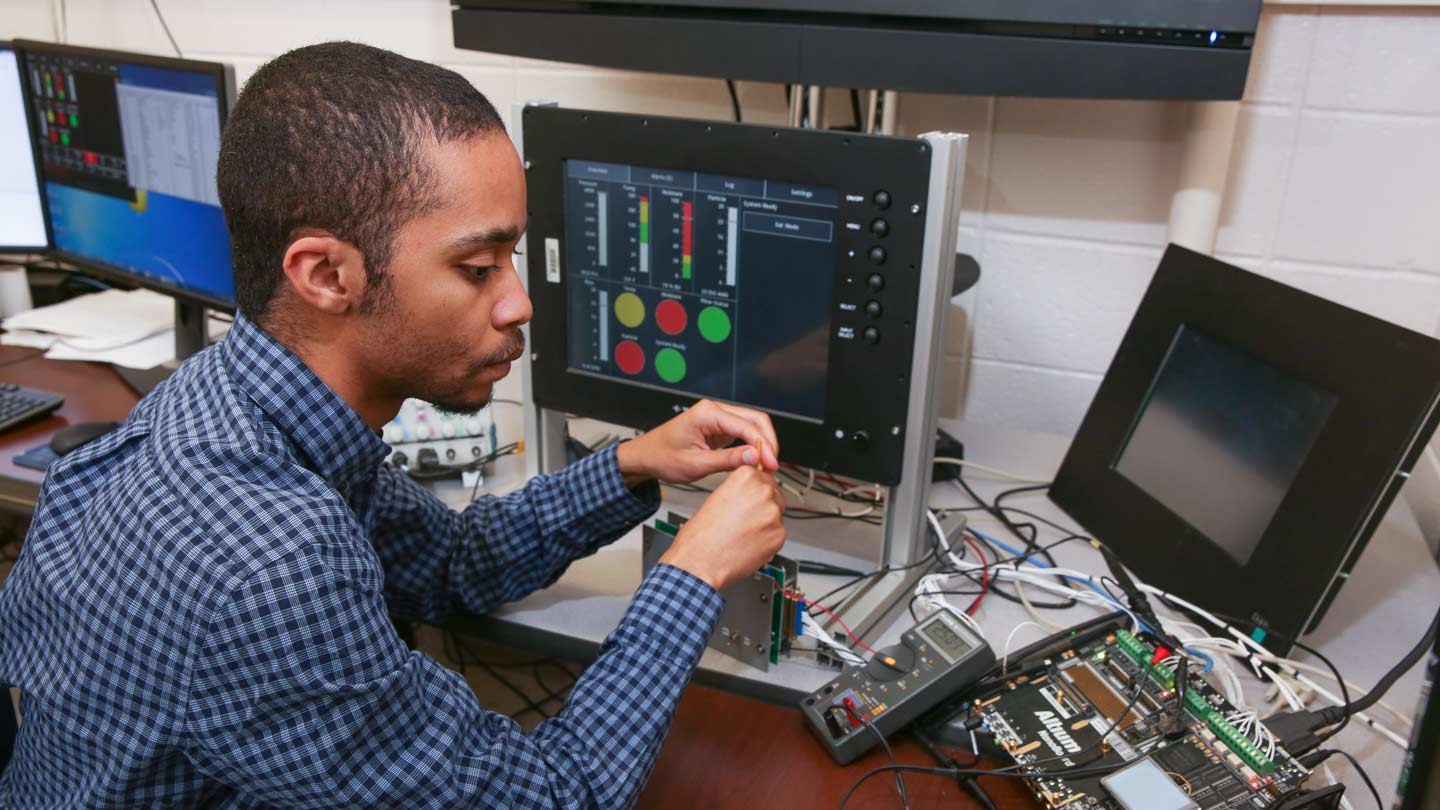 Talk with David Arterburn on a short walk through the halls of the Rotorcraft Systems Engineering and Simulation Center (RSESC), in UAH’s Wernher von Braun Research Hall, and you’ll quickly realize the center is about much more than helicopters.

Rotary wing platforms remain the foundation of their work, says Arterburn, director of the center since October 2013. But the "systems" in the center’s name could refer to a space payload, such as the Lightning Imaging Sensor they helped build that will soon be mounted on the International Space Station to gather data for lightning scientists. Or it might refer to designing, building and flight-testing an unmanned aircraft system (UAS) for the U.S. Army.

The RSESC was formed at UAH in 2003 as an initiative with the Army’s Program Executive Office – Aviation (PEO-AVN) and the Aviation and Missile Research and Development and Engineering Center (AMRDEC), based on the technical needs of nearby Redstone Arsenal. The center has grown to about 26 full-time employees who, along with students, continue to not only meet the real-world needs of Army aviation, but to anticipate them.

There are vertical lift research centers of excellence elsewhere that work with the hard science of blade dynamics and the physics of flight, Arterburn says. The RSESC is more involved in rotorcraft design, with a focus on model-based systems engineering and simulation and an eye toward the Army’s acquisition programs.

It’s a world he knows well. Arterburn is a retired Master Army Aviator with more than 28 years of experience in the cockpits and program offices for UH-60 Black Hawks, OH-58 Kiowa Warriors and other helicopters. He also served as an experimental test pilot and as an assistant professor at the U.S. Military Academy at West Point.

"We’re always trying to evolve their capabilities," he says of the center’s important partnership with the Army. "We’re also training their future workforce. Our students will eventually go to work in many of those offices or the offices of their industry partners."

Arterburn was asked to conduct a study with the Aviation Development Directorate at Redstone Arsenal to examine the airworthiness and development of complex systems such as today’s technologically advanced helicopters. It was determined there was a growing need for model-based systems engineering methodology and tools and, over the last year, UAH has invested in an RSESC Complex Systems Integration Laboratory (CSIL). He said the center is already seeing interest in the lab from the Army’s Future Vertical Lift Office, NASA and others.

The CSIL is an ideal complement to the center’s other resources, including labs for prototyping, for materials and non-destructive testing and experimentation, and for electrical, mechanical design and manufacturing, with a fully equipped machine shop. Arterburn points out that RSESC’s origins involved UAH materials science centers and that structural and prototype development have always been part of the center’s pedigree.

"We’ve been a design, build and fabricate organization for quite some time, building science and space payloads to support other researchers here at UAH, at NASA’s Marshall Space Flight Center on the arsenal and elsewhere," Arterburn says.

In 2014 the center began its involvement in UAS programs, and that continues to grow. The RSESC is part of a team with the Center of Excellence for Unmanned Aerial Systems led by Mississippi State University working on issues related to integrating UAS flights into the national airspace system. UAH is one of 14 core universities in the Alliance for System Safety of UAS through Research Excellence (ASSURE) team that executes research for the Federal Aviation Administration (FAA) Center of Excellence for UAS. Currently, the center is studying UAS ground collision severity under a contract with the FAA. That’s work that Arterburn says could expand into a number of different areas and leads the efforts to improve the safety of UAS, as well as providing research that will eventually open new airspace to many UAS platforms.

"We’re also looking for new, innovative vehicles," he says. "We are using our design heritage to find ways of creating new unmanned aircraft, especially in the small UAS category."

That includes examining the design protocols used for larger aircraft to see what might be adapted, and exploring technologies like additive manufacturing or 3-D printing of different materials. Arterburn hopes to tie RSESC’s design work with model-based systems engineering to additive manufacturing technology. He is currently working on a proposal to merge these two fundamental capabilities for rotorcraft, rockets and space applications.

He emphasizes that the RSESC isn’t trying to take the place of the roles of industry or the government, but to provide added value and synergy amongst the team. The center is also a place where industry and government can come together before there are the constraints of a contract, to talk about expectations and models.

"We can help them collaborate, and we can involve the men and women who will make up their future workforce," Arterburn says. "We don’t bid research projects without students being a part of it."

The premiere example of the RSESC’s commitment to students is its unique partnership with the Boeing Huntsville Design Center. Today, the program is responsible for more than 100 students – primarily from UAH but also from other universities working through the RSESC – to gain practical experience in a real-world engineering environment as employees, not interns. Arterburn says UAH is exploring similar partnerships with other area companies because of the successes of this program.

He is proud of the RSESC’s relationships with a local community of industry and government partners, including a surveying company, training organizations and airports, as they work to identify and create opportunities for students, unmanned aircraft systems and developing technologies for space and rotorcraft.

"We build systems. We don’t build parts. I’ve enjoyed the interaction with other UAH centers to bring various groups together to solve interesting problems for agencies on the arsenal, industry, and the larger aviation and aerospace community," Arterburn says.

"I enjoy that aspect of it. Every day is something different," he says. "Every week is a challenge in some area: To push someone’s research farther, to move a company’s capability forward, to discover something interesting."