Rotary valve could help propel craft to Mars one day

A rotary fuel delivery valve developed by a UAHuntsville team led by Dr. James Blackmon just might help us get manned space flights out of our immediate neighborhood one day, and he says it could have practical terrestrial applications.

Dr. Blackmon, a principal research engineer at the university's Propulsion Research Center, figures that to travel to places like Mars and beyond we'll first have to decide what kind of fuel delivery system we'll use to feed the rocket engines and then we'll have to determine how we're going to rebuild or maintain that system during long stays in space. That's where the new valve comes in.

A third system known as sequential pumping lies between those two and may be best suited for long-distance travel. In that configuration, three fuel tanks are pressurized in sequential rotation from a main tank. As the first tank is about to be expended, valves switch from it to the second tank, and then subsequently to the third tank, then back to the first tank, and so on. Tanks not being used to fire the engine are being recharged in rotation from the main tank.

"Rocket systems are typically designed so they can sustain one failure and be safe, but to have fail operational ability is great because you don't have to lose your mission" Dr. Blackmon said. "It is very cheap, very reliable and it gives you the same delivered payload as a turbo pump." 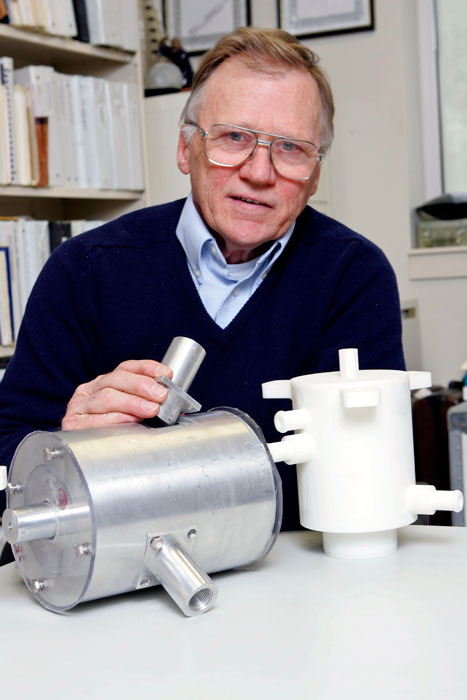 Dr. James Blackmon in his office with plastic models of the rotary valve made with a 3-D printer and a stainless steel version.

The sequential system has a three to one advantage because of its lower weight, lower cost and greater reliability, but if there's one drawback to it, it's the valves.

"Valves are often the source of trouble in spaceflight," Dr. Blackmon said. "You have these plunger valves slamming open or slamming closed, or ball valves clunking full open and clunking full closed."

That's a lot of wear and tear over time, and here is where the new rotary valve excels. It uses a mechanism operated by one of two redundant motors to turn a shaft and slide a configured recess to a port, opening that port for either fuel delivery or recharge. One valve can control filling and emptying of all three rotational fuel tanks in the sequential system, and it can replace multiple older style valves with a device that is lower weight, lower cost and more reliable.

"You can do it with standard valves but we think it's better to do it with this because a standard valve is so difficult to repair," Dr. Blackmon said. When it comes time for service, the rotational valve is an easy fix.

"You can use a Crescent wrench and take it apart," said Dr. Blackmon. "It uses simple tools to fix it, and you can do it in space. If you're going to Mars and an astronaut had to fix it, you could fix it easily with a valve repair kit without having to remove the valve. You just block it off and fix it."

Two 3-D printed plastic rotary valve prototypes and a milled stainless steel prototype reside in Dr. Blackmon's office, and he uses them to illustrate its operation.

"We can change the flow rate in a controlled way by the contours in the flow path and also by the rate at which you rotate the valve," he said. "That way, as the first tank is tailing off, you can gradually increase the second tank for smooth operation. You're not slamming valves open and closed, and it makes it much smoother in operation."

The valve was developed and tested using just $5,000 gained as part of the Space Act Agreement initiatives for development, engineering and testing of design concepts. The money allowed former UAHuntsville graduate students David Eddleman and Chris Morton to work on design and testing in conjunction with James Richard of the Engineering Directorate at Marshall Space Flight Center. Eddleman is now an MSFC employee. MSFC testing facilities were used to test and prove the valve's operation, as well as facilities at UAHuntsville.

Cheaper, lighter weight, dependable and easy to fix. But will it ever fly?

"That's a very good question," Dr. Blackmon said. "The problem is that it's very tough to get technical funding to develop a new idea, because what we have right now works. What we tried to do in testing was to demonstrate that the rotary valve does work like we said it will."

For now, he's also looking at uses for the valve in industrial flow control. "It might have applications in industry," Dr. Blackmon said, "if they want a durable valve in the field that's easy to fix, where you can keep the valve in place while you fix it."