The Zeeko robotic polisher is the newest, and perhaps most impressive, device at the center. Size alone seems to make "impressive" a fitting adjective. Standing nine feet tall and almost as wide and deep, the massive Zeeko tips the scales at nearly 17,000 pounds.

A British firm, Zeeko, specializes in leading edge technology robotic polishers for the optics industry and other industries requiring the utmost in polishing precision and control. The firm boasts more than 50 worldwide patents.

Totally computer controlled, the Zeeko polisher can be programmed to select the exact type of polishing motion, as well as polish pressure, distance and direction of attack, Reardon explains. 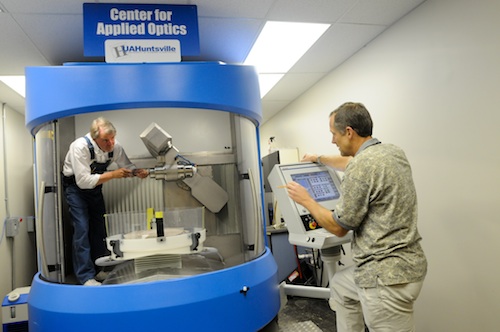 The sophisticated machine is rare enough - there are only four or five others in the entire U.S. But it will allow the center to create optical devices of greater size and quality than it could develop before, and that could have major implications for UAH-CAO ability to support research for both the public and private sectors.

"This gives us the ability to collaborate more with Marshall Space Flight Center," Reardon says, adding that it could also be used to produce optical devices for optical firms that need occasional large-scale mirrors, lenses or other items.

Reardon says the polisher will allow UAH-CAO to support local, regional, and national teams in the fabrication of complex optical systems. It will also extend the center's research efforts in optical fabrication process development, optical testing, and optical design.

UAH-CAO acquired the robotic polisher with the help of a National Science Foundation - Major Research Innovation (NSF-MRI) Program grant. The chain of events that led to the delivery of the robotic polisher this summer began several years ago with a NASA - Goddard Space Flight Center program investigating the feasibility of polishing silicon carbide, one of the hardest materials in existence.

"To do the necessary polishing, we leased the smaller version of this machine, the Zeeko IRP-200. It allowed us to take machine-rough silicon carbide and produce a 5 nm RMS rough surface," says Reardon. In other words, it can produce a polished surface with the smoothness and reflectivity of a glass mirror.

Reardon and his colleagues, Drs. Robert Lindquist, Joseph M. Geary, and Richard Fork, were so impressed with the smaller Zeeko's ease of use and performance that they decided to submit a grant proposal to NSF to fund acquisition of the IRP-200's larger brother, the 600X.

Their first two proposals were turned down. "But you tweak your proposal, based on the feedback they give you," explained Reardon. The third submittal was accepted, and UAH-CAO took delivery of the polisher in late July.

The Zeeko builds on other recent acquisitions over the past two years, which include a Nanotech UPL250 precision diamond turning lathe, which arrived in January 2010. It is capable of producing free-form optical surfaces up to 350 millimeters in diameter.

The Center has used the lathe to produce and deliver optics for THz band, visible light, x-ray and gamma rays that achieved surface smoothness (RMS) values of less than 2.5 nanometers.