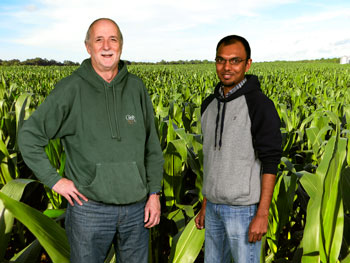 HUNTSVILLE, Ala. (March 5, 2014) - Global farmers could get better decision-making help as refinements are made to North Alabama soil moisture modeling research being done by an atmospheric science doctoral student at The University of Alabama in Huntsville (UAH).

The models indicate how much added moisture would be needed in a given area versus historical data to achieve various crop yields, and they could aid in making expensive infrastructure investments by helping to determine their economic viability.

"The important thing that I want to stress is that this is not a predictive model, it is a decision-support model. It helps farmers and officials make decisions based on historical weather patterns," says doctoral student Vikalp Mishra. In areas where water is in short supply, irrigation infrastructure can be expensive and the model could help to determine its economic cost effectiveness.

The model uses satellite data to determine the amount of soil moisture present and then estimates yields based on available moisture. Water is at the center of nearly all farming decisions. It affects the crop cultivar, the variety of seed planted, the amount and type of fertilizer required and the amount of irrigation needed to produce a given weight of grain.

Researchers begin by using satellite derived evapotranspiration estimates at thermal infrared bands to deduce the amount of moisture being transpired by plants. Moisture data are derived from the Geostationary Operational Environmental Satellites (GOES). GOES data are inputted into the Atmosphere-Land Exchange Inverse (ALEXI) model, previously developed by Dr. Mecikalski and others. The ALEXI model calculates the evapotranspiration rates. The soil moisture is directly related to the evapotranspiration and the percentage of canopy cover so that the amount of moisture in the soil up to the rooting depth can be deduced.

The important thing that I want to stress is that this is not a predictive model, it is a decision-support model. It helps farmers and officials make decisions based on historical weather patterns.

"Once we have that soil moisture estimation, then the next thing is to categorize the values we obtained into surface values and root zone values," says Mishra. The amount of vegetative cover influences those values. If there is more vegetation, there is more transpiration, which means that moisture is being drawn from the soil in the root zone of the plants, he says. Less vegetative cover means the sensed moisture is evaporating at a greater rate from the top layer of soil.

Vegetation cover is estimated using the Moderate Resolution Imaging Spectroradiometer (MODIS) scientific instrument launched into Earth orbit by NASA in 1999 on board Terra (EOS AM) and in 2002 on board the Aqua (EOS PM) satellites.

"If it's more than 30 percent vegetative cover, then it is predominantly root zone moisture due to transpiration," Mishra says.

Being able to sense the strata of ground moisture to that depth is important, Mishra says, because different crops have different root depths and distributions for optimal water uptake.

Next a soil moisture profile is developed with the principle of maximum entropy model (POME), which uses prior specific data over a set of trial probabilities to determine which is the most likely outcome. The result is input into the Decision Support System for Agrotechnology Transfer (DSSAT) program, a software application program that comprises crop simulation models for over 28 crops and has been in use for more than 30 years across the world. The model encompasses all inputs into the crop, including weather, plant spacing, cultivar, fertilizer, soil type and fertility, and others.

Mishra applies as many quantified inputs about crops and weather conditions possible to this model, except one: precipitation.

At this point, he inputs his soil moisture profiles and from there he can model yields in kilograms per hectare based on how much soil moisture is available to the crop. The model can provide daily estimates of grain weights as well as water and fertilizer needs within a growing period.

"What we found was that our soil moisture measurements and estimated crop yields were significantly comparable with county averaged National Agricultural Statistics Service yield data and ground-based precipitation-induced DSSAT results," Mishra says. His doctoral research is focused on trying to pinpoint the area of measurement more closely, reducing it from 100 square kilometers to 1 square kilometer, so the results will be more supportive of the decisions of individual farmers in an area.

The work could prove especially valuable for farmers and government officials in the more arid countries of the world, says collaborator Cruise, the principle researcher from UAH's Earth System Science Center.

"The main impetus was to run this model in areas where you don't have a lot of precipitation to start with," Cruise says. "Then you can determine just how much irrigation and other inputs you might need to get a given result." But the continuing work to pinpoint the areas of measurement could result in an online database that farmers in Alabama and elsewhere could use to help them make decisions to cope with variability in annual rainfall, he says.

"There are potentially many different gradients," Cruise says, "where the area being measured could be downsized."