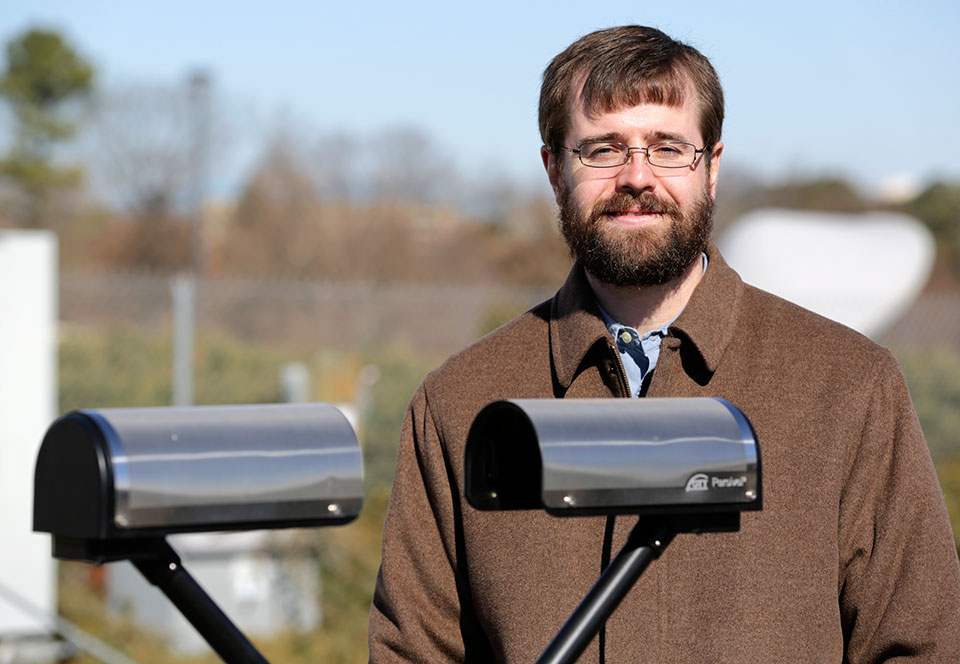 Patrick Gatlin with a Parsivel2, a disdrometer that measures the particle size and velocity of raindrops falling through a laser, at UAH’s weather monitoring site near Cramer Hall. Measured drops fall between the two "arms" of the device.
Michael Mercier | UAH

HUNTSVILLE, Ala. (Jan. 31, 2014) - Dialing in the accuracy of satellite weather forecasting is the goal behind basic research into raindrop size and shape being done at The University of Alabama in Huntsville by a UAH doctoral student who is also an atmospheric scientist in the NASA Pathways Intern Employment Program.

Patrick Gatlin says his work measuring the height and width of raindrops using ground instruments provides an accuracy baseline that is then scaled up to ground radar and then to satellite measurements. He is co-author of a paper on the topic (Tokay, Ali, Walter A. Petersen, Patrick Gatlin, Matthew Wingo, 2013: Comparison of Raindrop Size Distribution Measurements by Collocated Disdrometers. J. Atmos. Oceanic Technol., 30, 1672–1690; http://dx.doi.org/10.1175/JTECH-D-12-00163.1).

"That's really the whole purpose of measuring raindrops, is for remote sensing purposes," Gatlin says. Scaling up accuracy from a small sensor on the ground to large sections of the Earth being observed from space requires very accurately calibrated instruments. "Our ability to correctly depict rainfall using a sensor in space is closely tied to knowing how precipitation varies, right down to the individual raindrop and snowflake size."

Perfecting ground-level instrument observations, enlarging those to encompass ground-based radar and then going even larger to develop accurate satellite measuring instruments is the best way to reduce error as the area under observation increases. "Before we invest in all this satellite instrumentation," Gatlin says, "let's make sure we've got it right."

A coming big step in scaling up precipitation forecasting is NASA's planned launch of its Global Precipitation Measurement (GPM) satellite toward the end of February. UAH is a mission contractor, headed at the university by Dr. Larry Carey, an associate professor of atmospheric science, and involving UAH Earth System Science Center research scientist Matt Wingo, who is working with NASA at their flight facility in Wallops Island, Va.

Our ability to correctly depict rainfall using a sensor in space is closely tied to knowing how precipitation varies, right down to the individual raindrop and snowflake size.

"UAH designed the platform for some of the ground-based instruments that will validate the information from the satellite," says Gatlin.

Carrying an advanced radar/radiometer system to measure precipitation from space, the GPM is the core of what will be a global network of measuring satellites that will provide next-generation global observations of rain and snow. It will serve as a reference standard to unify precipitation measurements from a constellation of research and operational satellites.

Through improved measurements of precipitation globally, the GPM mission will help to advance understanding of Earth's water and energy cycle, improve forecasting of extreme events that cause natural hazards and disasters, and extend current capabilities in using accurate and timely precipitation information.

In his own research, Gatlin has ranged from Iowa and Oklahoma to Canada, Finland, Italy and France. Rather than raindrops, the Canadian research was designed to collect snowflake images in order to improve the accuracy of measuring devices for snowfall. 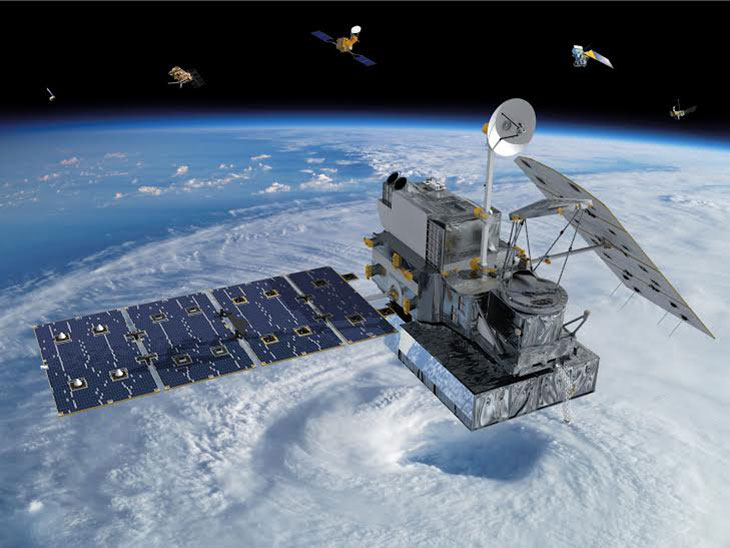 An artist’s rendering of NASA’s Global Precipitation Measurement (GPM) satellite, set for launch toward the end of February. Image: NASA

In each locale, an integrated network of ground-level measuring devices have been deployed, like the Parsivel2, a disdrometer that measures the particle size and velocity of raindrops falling through a laser. Also in use are two-dimensional video disdrometers, which use two video angles to create 2-D pictures that enable determination of raindrop shapes. A video disdrometer on loan from frequent research collaborator Colorado State University is located on the UAH campus behind Cramer Hall.

During a field study, the instruments on the ground take measurements while a plane flies through the clouds to collect actual raindrop information and another flies high above the clouds with remote sensing equipment to mimic satellite radar detection. Results from all the measurement methods are compared.

Enhanced satellite-based precipitation measurements will improve both rainfall and snowfall predictions on a global scale, Gatlin says. "We'll be measuring rain and snow in some areas where we've never measured it before." The ability to better measure raindrop size also can have impact on severe weather forecasting, as small raindrops lead to higher evaporation rates that have been correlated with larger and more forceful microbursts by UAH's Dr. Kevin Knupp and others. 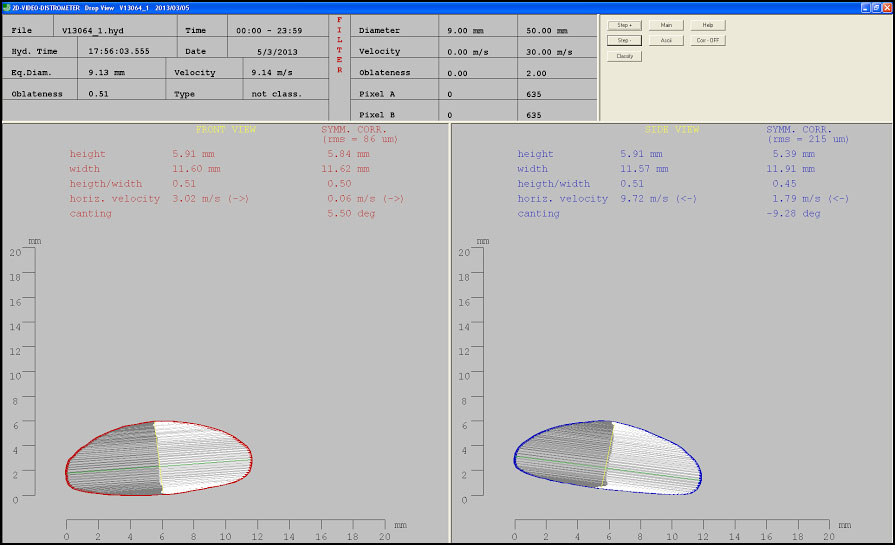 An image of the largest raindrop ever recorded in the U.S., which fell through a monitoring device behind UAH’s Cramer Hall. It’s 9.1 mm in diameter. Image: UAH

Gatlin is about to finish up a global study focusing just on very large raindrops 5 millimeters in size and larger. These drops are difficult to capture in the small measuring area afforded by measuring instruments, and so their observation is rare. Gatlin says out of 224 million drops he has researched, only 8,000 have been 5 mm or larger.

"Even though large raindrops can have the greatest impact on radar measurements, we don't have a good idea of their concentration," he says. "What I've been doing is bringing together all the raindrop data bases that have collected various types of rainfall data using the same techniques."

Interestingly, while Sumatra holds the honor of having the greatest number of large drops overall, the largest drop collected in his study fell through a measuring device at the UAH campus. It measured 9.1 mm and was formed in a hailstorm when a falling piece of hail melted before landing.