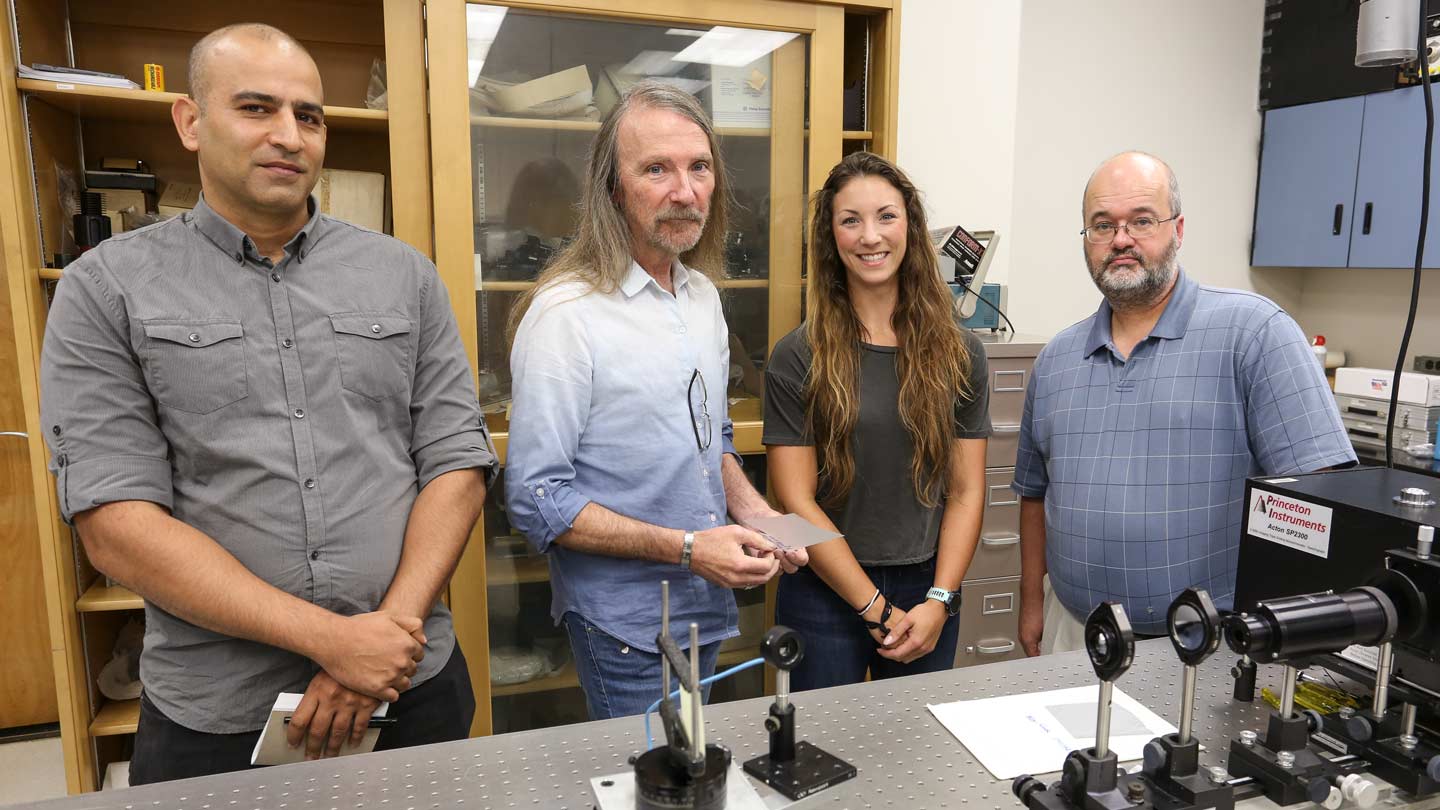 Development of a virtual reality-like projection system to study insect vision could eventually provide the U.S. Air Force with a new type of navigation system.

The University of Alabama in Huntsville (UAH) is the lead institution partnered with Polaris Sensor Technologies Inc. of Huntsville in a three-year, $1 million Phase II Small Business Technology Transfer (STTR) grant to test various screen materials and then design and build an insect experiment scene projection system for the Air Force.

UAH and Polaris successfully completed a Phase I grant study and were encouraged to submit a proposal to the competitively awarded Phase II program. The team has recently been notified that its proposal is a winner. Polaris Sensor Technologies will be doing the design work and UAH is responsible for research into component materials and systems. The chamber will be built in the UAH Optics Building.

The Air Force is interested in learning how insects use polarization vision, says Dr. Don Gregory, UAH distinguished professor of physics. Polarization involves the geometrical orientation of light wave oscillations, a property the insects detect and use somehow to direct themselves.

"Many insects can see and use optical polarization. For example, some insects can see the partial polarization pattern in the sky, which we cannot see without instruments. So think about scenarios in which GPS is not available, such as at the bottom of ‘urban canyons.’ How do you navigate?" asks Dr. Gregory. "Some insects, including bees, ants and locusts, navigate by sensing the celestial polarization pattern, and it would be pretty cool to understand how they do that and exploit the mechanism to deal with GPS-denied situations."

To figure out how the insects exploit polarization and color vision, Air Force scientists first need an experimental environment that provides realistic visual stimuli for the insects.

"We want the insect to think it’s outside," Dr. Gregory says.

There are two challenges to making that happen. First, the screen used to create the environment has to accurately represent the light spectrum and polarization that is input into it during an experiment. Secondly, the screen refresh rate must be above the rate at which the insect under test experiences smooth motion rather than merely a series of images refreshing, called its flicker fusion frequency.

There are two possible screen types to project experimental images to insects. One uses a reflective screen material that bounces back projected images like a movie screen. The second uses a transmissive screen that displays images projected on it from behind, similar to projection TV screens.

Finding the best material for both types of screens is the job of Bill Walker, who is a physics graduate student with an optics concentration.

"What we’re developing is an IMAX-like screen for insects," Walker says. "What I do is test candidate materials for the screen." The fact that insects can see in a wider spectrum than humans adds to the challenge. "It’s got to be ultraviolet through human range visible, and I know the UV range is a tough nut to crack."

In the lab, Walker uses a monochromator to select wavelengths of light he concentrates on a swatch of prospective screen material, and then measures the amount of light reflected or transmitted across a 180-degree arc, all while monitoring the reproduction’s faithfulness to the wavelengths and polarization being input.

"The main thing I measure is the amount of light that either passes through or reflects from the screen, depending on the angle," Walker says.

His work is augmented by research into polarization by scattering done by team member Ahmed Elsehly, an optical science and engineering doctoral student who also serves a primary role as the researchers’ expert on the Zemax optical design software they use.

"Zemax is the industry standard for optical software, and I would say there’s no one at the university who understands it better than Ahmed," Dr. Gregory says.

The second hurdle to insect virtual reality is the screen refresh rate, which is being tackled by Samantha Gregory, Dr. Gregory’s daughter and a graduate student in physics.

"Half the challenge of getting them to believe what the screen is showing them is real is getting the screen to flicker faster than the insect can detect it," she says. That’s quite a feat, since the rate at which the insect sees separate refreshes as a continuous image in motion, which can be as high as 400 Hz, is well above the display rate of about 60 Hz where humans see moving things on a screen as continuous motion.

"To be successful, we just have to operate above that 400 Hz," Samantha Gregory says.

He compares refresh rate with the act of drawing figures on many playing cards, then flipping them to get the figure to move. "If it flips fast enough, it looks like one continuous motion."