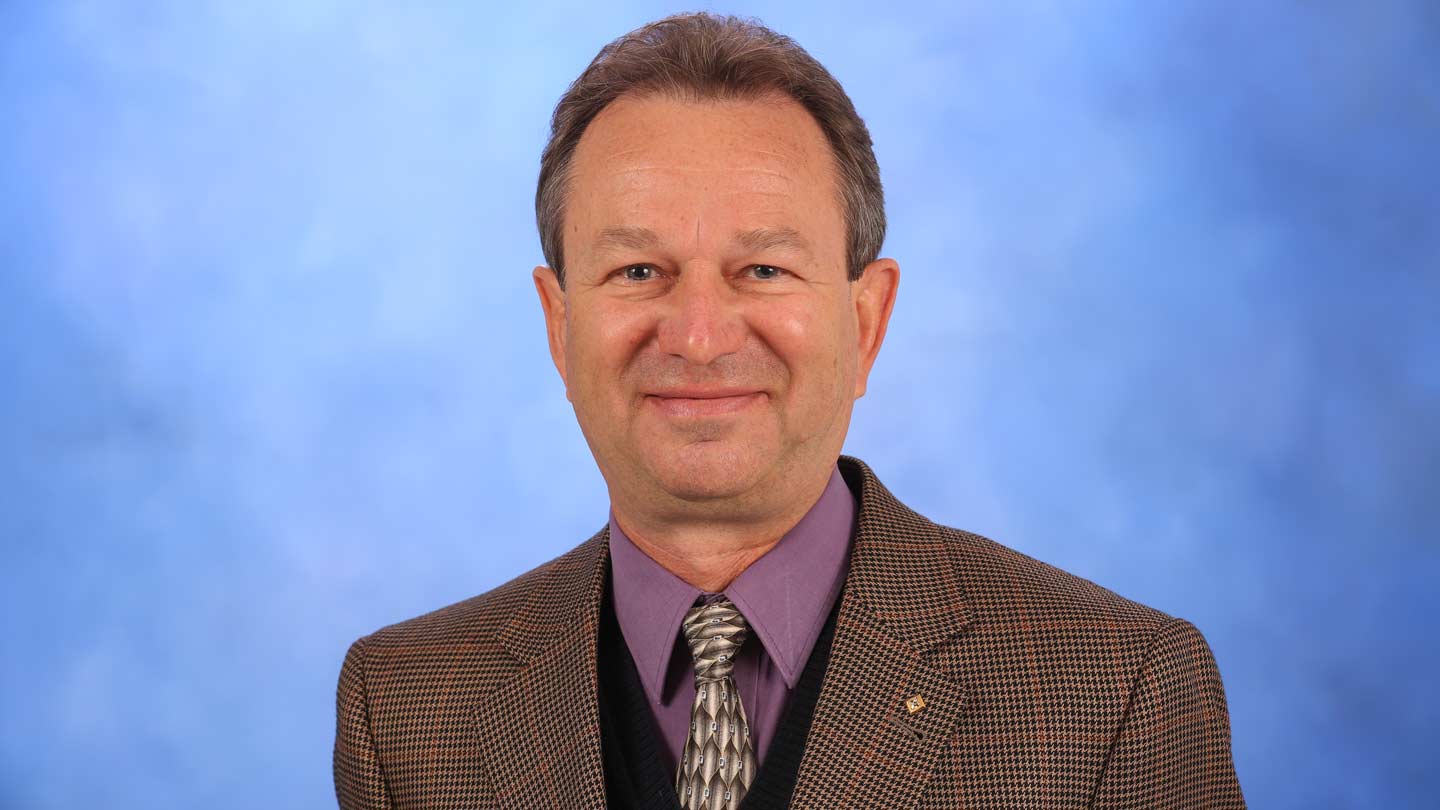 Dr. Vladimir Kolobov has been elevated to IEEE Fellow for his contributions to plasma research.

The Institute of Electrical and Electronics Engineers (IEEE) has elevated a researcher at The University of Alabama in Huntsville (UAH) to IEEE Fellow.

Dr. Vladimir Kolobov, who is a principal research scientist at UAH's Center for Space Plasma and Aeronomic Research (CSPAR) and manager of plasma technologies at Huntsville's CFD Research Corp. (CFDRC), was elevated effective Jan. 1, 2016, by the IEEE board "for contributions to theory, simulation and software development for industrial plasma."

New IEEE Fellows are announced at the annual IEEE International Conferences on Plasma Science, coordinated by the Plasma Science and Application Committee (PSAC) of the IEEE Nuclear & Plasma Sciences Society. The 43rd ICOPS will be held June 19-23 in Banff, Alberta, Canada.

"I was pleasantly surprised, especially after receiving emails from several members of the 'elite club' within a few hours after the announcement," Says Dr. Kolobov. "My wife was very happy. The news made our 2015 holiday season more enjoyable."

At UAH, Dr. Kolobov's current research interests include experimental studies of plasma activation of living plants and seeds and plasma interactions with liquids at the Propulsion Research Center, and the transport of electrons in the solar wind at the Department of Space Science. The former involves understanding of plasma interactions with biomatter. The latter is devoted to theoretical formulation of the electron kinetics and numerical simulations incorporating both inter-particle scattering and wave-particle interactions in space plasmas.

"I wish to use this opportunity to emphasize the importance of low temperature plasma science and technology in the 21st century," Dr. Kolobov says. "Low temperature plasma (LTP) becomes increasingly important for a wide range of modern technologies from material processing to space exploration and biomedicine.

"Thanks to its proximity to NASA and Redstone Arsenal and its research focus on space science, atmospheric research and electric propulsion, UAH has a unique opportunity to become one of the leading centers for the development of plasma technologies for a wide range of industrial applications from space exploration and defense to biology, medicine and agriculture," he says. "I hope my experience could help make this happen."

"Dr Kolobov's election as a Fellow of the IEEE is richly deserved. He has pioneered the development of increasingly sophisticated computational tools and techniques to understand the behavior of laboratory and commercial plasma, especially so-called low-temperature plasma," says Dr. Gary Zank, director of CSPAR and chair of the Department of Space Science.

The most common state of matter in the universe is in the form of LTPs, Dr. Zank says, and the extent of societal and economic benefits that are enabled by LTPs is astonishing.

"For example, the entire current and future information technology (IT) infrastructure owes its very existence to LTPs and the role that they play in plasma etching in manufacturing all conceivable forms of IT components, ranging from smart phone components to supercomputers, automobile chips, etc.," Dr. Zank says. "In 2012,12 percent of the electricity generated in the US was expended by lighting and about two-thirds of that in LTP lighting sources. So Vladimir's contributions have been to explore computationally the physics behind these important plasma systems, and he has developed some of the most advanced codes in the world to address these problems."

Since joining CFDRC in 1997, Dr. Kolobov has been responsible for the development of computational tools for a broad range of applications from material processing to aerospace and nanoscience. He was a key architect of the first commercial software, CFD-ACE+Plasma, for simulations of plasma devices and processes, and Unified Flow Solver for multi-scale kinetic-fluid simulations of gas flows and partially ionized plasmas.

He was a principal investigator of several successful SBIR/STTR projects funded by the National Science Foundation (NSF), the Air Force Research Laboratory, NASA, the Air Force Office of Scientific Research, the Defense Advanced Research Projects Agency (DARPA) and the U.S. Dept. of Commerce, as well as a principle investigator and project manager for numerous industrial projects from GE, Samsung, TEL, Panasonic, MKS Instruments, ABB, Inficon, and other companies. His work promoted widespread use of computer simulations in modern plasma technologies.

Dr. Kolobov's distinctive contributions to the advancements of plasma science and its industrial applications include developing a kinetic theory of glow discharges (in collaboration with Lev Tsendin) that explained the complicated structure of the cathode region and the nature of electric field reversals therein. He has developed a kinetic theory of low-pressure inductively coupled plasma that described the collision-less electron heating and formation of electron energy distribution function under conditions of the anomalous skin effect. He is the author of over 60 journal articles and numerous conference presentations Dr. Kolobov is a recipient of the IEEE Region 3 Outstanding Engineer Award for distinctive contributions to plasma science through advances in theory and through the development of computational tools in April 2015.

Since 2009, Dr. Kolobov has been a co-principle investigator of the Department of Energy Low-Temperature Plasma Science Center (PSC), administered by the University of Michigan. UAH became a part of the PSC through a subcontract from the University of Michigan. PSC researchers study kinetic and non-linear effects responsible for self-organization of electric discharges

"My PSC activities focus on linking academic research with industrial applications of LTP," Dr. Kolobov says. "This linking included dissimilation of computational tools developed at CFD Research Corporation to academic and industrial users. On the other hand, active participation in fundamental research of physical kinetics at PSC provided new ideas and methods for the development of advanced computational tools."