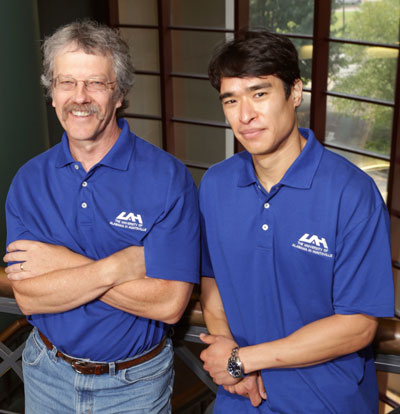 UAH College of Business Administration faculty members Dr. Allen Wilhite, chairman and professor of economics, and Dr. Eric Fong, associate professor of management, plan new research into academic journal submission processes and grant writing with a $212,000 first-year grant from the Office of Research Integrity of the U.S. Dept. of Health and Human Services.

Two University of Alabama in Huntsville (UAH) professors who last year sent tremors through the research world with findings that some academic journals engage in editorial coercion now have a new grant to expand their research.

College of Business Administration faculty members Dr. Allen Wilhite, chairman and professor of economics, and Dr. Eric Fong, associate professor of management, received a $212,000 first-year grant from the Office of Research Integrity of the U.S. Dept. of Health and Human Services for their proposal, "Measuring the Extent of and Reactions to the Practices of Honorary Authorship and Coercive Citation in Academic Publishing and Grant Writing." The grant comes with a result-contingent $40,000 second-year extension.

The new research will encompass all areas of their past work and look at a wider academic field, as well as into the grant writing process. One question the researchers have is have the practices of the past 10-15 years become so accepted that they are now endemic to the process?

The pair rocked academia when their research published in Science found that, as a condition of publication, some academic journals direct authors to insert material beneficial to the editor's journal, asking them to cite additional sources from the journal to which the research was submitted. ("Coercive Citation in Academic Publishing," Allen W. Wilhite, Eric A. Fong; Science, Vol. 335, February 3, 2012)

"What we found out was that editors were saying, 'You don't have enough citations quoted from my journal,'" Dr. Wilhite said.

Likewise, in their earlier research they found that when submitting to journals with editors known to coerce, some authors attempt to boost their chances of publication in that journal by using gratuitous citations in bibliographies, adding cites to the editor's journal before being asked.

"When we first found out about this and suspected it might be happening, we said, 'Let's see how big it is,' and so we began asking our colleagues and members of the faculty, and we found out that many of them did know about it," said Dr. Wilhite.

That prompted the research, which first focused on academia in business and the social sciences and explored journal editor practices. Next, the two studied engineering and the hard sciences, adding questions about whether authors added gratuitous bibliographic citations. They are now expanding into the field of medicine and also probed whether authors included honorary authorships to boost their papers.

"What we found from our survey research was that everything we thought of that could have been possibly happening actually happened," Dr. Wilhite said.

The practices appear to arise from the confluence of a tenure-track professor's need to be published and a journal's need to be highly cited in order to rank high in Thomson Reuter's Journal Citation Reports, on which journal prestige, funding and in some case advertising revenue is reliant.

"If an editor can add citations, then their count is higher and their impact is greater," said Dr. Wilhite.

Academic journal editors were found to ask non-tenured professors disproportionately for added citations from their own journals and other alterations. Tenure-track faculty members are vulnerable to coercion due to time constraints, the researchers said. They have six years to achieve tenure, and the process for approval of a single research paper for publication can be a year or longer. Dr. Fong said one paper he submitted took four years to get published.

"That's part of the reason we hypothesized that assistant professors were more likely to be coerced," said Dr. Fong.

More recently Dr. Wilhite and Dr. Fong began to hear that some authors may pad their citations and may add authors to manuscripts even though those individuals are minimally engaged in the project. "We found out authors were talking more about gratuitous citations," Dr. Fong said. Such citations, as well as honorary authorships, might raise the prestige of a research paper through name recognition. Sometimes they include the name of an advisor, or else researchers reciprocally cite each other on papers to give the appearance that they have doubled their productivity.

"Adding an honorary authorship by a research paper's author could even be the result of departmental coercion," Dr. Fong said. "We don't know, but we are going to ask the question."

During their journal research, Dr. Wilhite and Dr. Fong will also be asking to what extent these same practices are being employed in the grant application process.

"So then we went beyond publications and start thinking about how gratuitous citation and honorary authorship could affect grants," Dr. Fong said. "When it came to the grants, we began to ask if people are citing potentially impactful work in grant proposals even if it is only tangentially involved." The HHS Office of Research Integrity is interested in the answers.