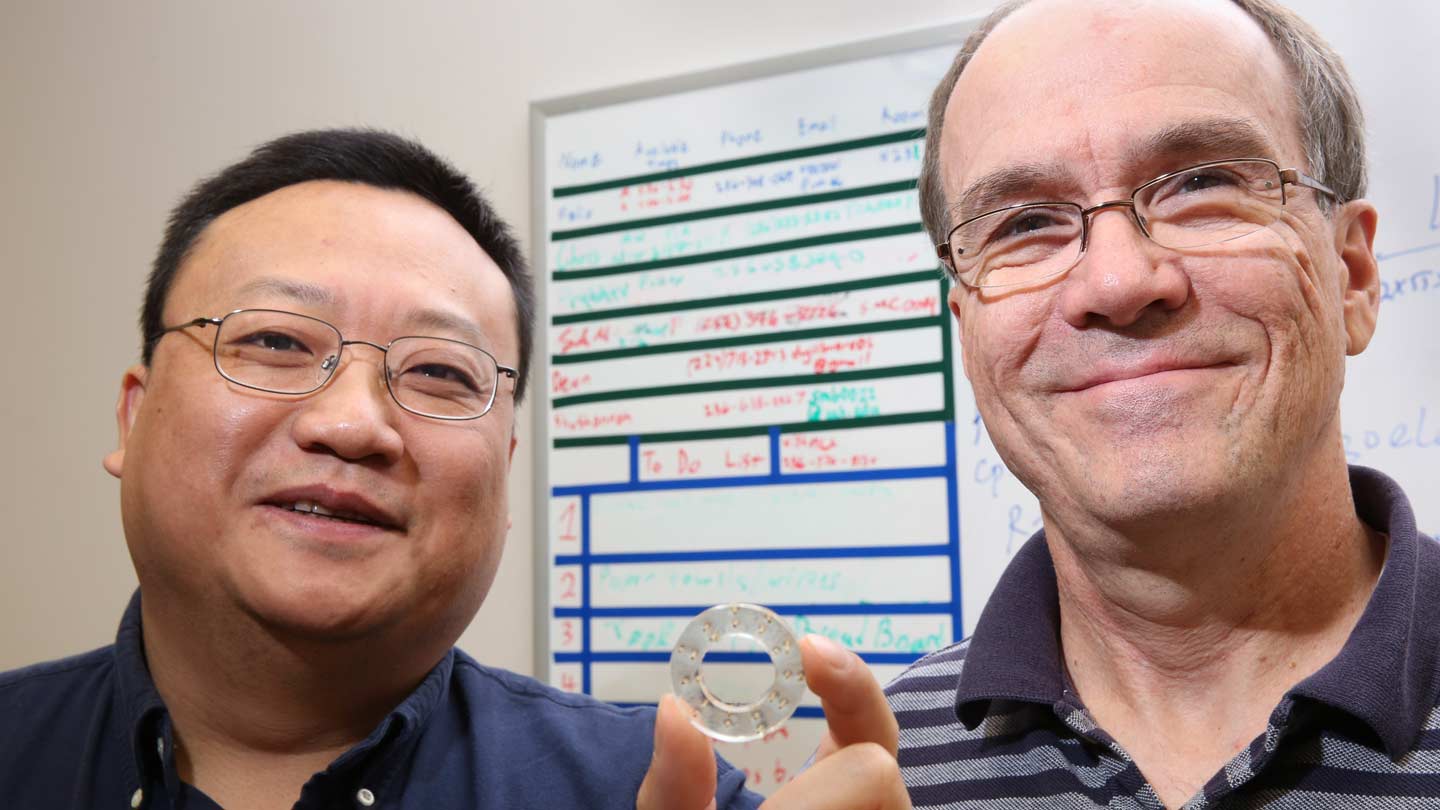 A piezoelectric load-sensing washer being developed by a professor and a recent graduate at The University of Alabama in Huntsville (UAH) provides a more accurate way to measure the clamping force exerted by the bolt it is on.

That's a benefit for numerous industries where the clamping force of bolts is critical, including construction, auto assembly, nuclear power, racing, aviation and space.

"Any performance application will have a need for this," says Dr. Gang Wang, assistant professor of mechanical and aerospace engineering who is testing the new washer system with Dr. David (Andy) Hissam, a UAH mechanical and aerospace engineering doctoral graduate who works at NASA's Marshall Space Flight Center (MSFC) and is the team lead for the Propulsion Detailed Design Branch (ER34).

A bolt's clamping force, called preload, is generated as the bolt stretches during tightening. The two most common methods of applying preload are torque control and turn control. In torque control, a specified torque is placed on the fastener, typically with a torque wrench. In turn control, the nut is turned through a specified angle that stretches the bolt the desired amount. Both methods are only approximations of the true preload exerted because friction plays a major role in the readings obtained.

"When you use a torque wrench, you are measuring torque, not the preload. You can be off the bolt's specified preload by plus or minus 35 percent by using a torque wrench as an indicator because of the amount of friction involved, which is very difficult to quantify," says Dr. Hissam.

Any performance application will have a need for this.

"That means," says Dr. Hissam, indicating a drawing of a flange, "that to get 2,000 pounds of preload on each bolt, a different torque value would have to be applied to each one."

The washer the pair is developing uses piezoelectric filaments connected to a handheld device that registers the preload value by reading the electrical output of the filaments. Piezoelectric materials have the capacity generate a voltage when they are subjected to mechanical stress.

"When you tighten it up, this directly indicates how much force this washer is experiencing, which is directly related to the bolt's preload," say Dr. Wang. "Instead of a plus or minus 35 percent variance, we are shooting for a closer range, like 5 percent to 10 percent."

The two have filed a NASA Disclosure of Invention and New Technology and have received a 2016 MSFC Center Innovation Fund grant to further test and refine the washer.

"We are continuing to look for additional sources of funding in order to further develop it," Dr. Wang says.

Tests getting underway now will involve determining an appropriate low-cost material in which to embed the piezoelectric filaments, vibration and temperature testing and trials to accumulate the data necessary to provide accurate preload readings.

"Two things we are after are accuracy and to keep the costs down," says Dr. Wang. "We want to test so that we can be sure that when a technician tightens a bolt he gets that specific value he is looking for every time."

Because a piezoelectric load cell is ceramic and fragile, the tests will also provide information about optimizing washer design to avoid breaking the sensing elements.

"You don't want a force directly applied to the piezo matter; you will break it," Dr. Wang says. Since that renders the washer's measuring capability useless, the washer's metallic elements must be designed to carry the majority of the load.

"We are also looking at what type of material we should use to surround the piezo material that will protect it best," he says. "That way we can be sure the piezo element will provide an accurate reading and not break."

If the elements can be preserved, the washer could be used many times.

"There should be no reason," Dr. Hissam says, "that it can't be reused."