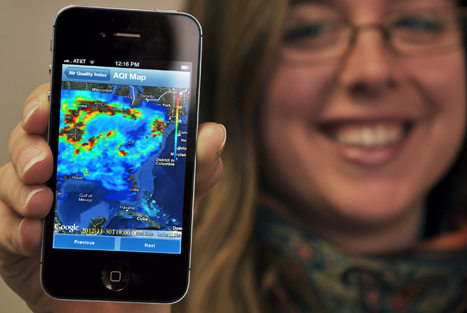 HUNTSVILLE, Ala. — People with respiratory problems can get an instant up-to-date local report on a key air pollutant through a new free mobile phone app created at The University of Alabama in Huntsville.

MobileAQI (Mobile Air Quality Index) uses data from instruments on board NASA and NOAA satellites to supplement pollution estimates available from other sources, to give a more accurate and reliable report on fine particulates (particles no bigger than 2.5 microns) in the air, said the project leader, Dr. Udaysankar Nair.

"That is the size that is most efficient at getting into your lungs," said Nair, an assistant professor of atmospheric science at UAHuntsville. "The population most at risk is the elderly, especially people with respiratory problems, although this could be of use to children or anyone with serious respiratory problems, such as bad asthma."

In addition to giving an estimate of current conditions, the app also forecasts hour-by-hour air quality as much as 24 hours in advance.

The app, which is available for both Android and iPhone systems, provides a quick reading on local particulate levels. The coverage area includes most of the eastern U.S., from the tip of Florida as far north as Milwaukee and from the Atlantic Ocean as far west as the border between Kansas and Colorado.

The app is a spinoff of NASA-supported research to improve tools used to forecast the density and spread of smoke from forest fires, both wild and planned. That Google-based tool merges satellite data with other information to produce high-resolution forecasts of smoke density and the direction in which the smoke will move.

Links to both the Android and iPhone versions of the free app are available on the ESSC home page at: http://nsstc.uah.edu/essc/