The University of Alabama in Huntsville (UAHuntville) has been selected by NASA to participate in a mission designed to investigate the highest energy cosmic rays, single sub-atomic particles, each with as much kinetic energy as a major league pitcher's fastball.

The Extreme Universe Space Observatory (EUSO) mission seeks to identify the nearest sources these extremely energetic particles - with energies greater than 10 Joules - and to discover how their sources accelerate particles to such high energies. EUSO will be deployed on the Exposed Facility (EF) of the Japanese Instrument Module (JEM) on the International Space Station (ISS). EUSO was conceived and promoted by the late Prof. Yoshyuki Takahashi of UAHuntsville.

The JEM-EUSO instrument is a very large camera mounted on the JEM-EF. Looking down on the nighttime atmosphere from the ISS orbit, this camera will record video clips of luminous tracks created by extreme energy cosmic rays striking the atmosphere. These video clips will be analyzed to determine the energy and arrival direction of each particle.

"We hope that we will collect enough of these events so that when we map them back on the sky, we will see clusters in one or a few places, indicating sources in those directions. We will then go look for the counterparts in maps of the sky in optical, UV, X-rays, gamma rays, etc. to identify the source," said Dr. James Adams, a UAHuntsville principal research scientist. "This assumes there will be a counterpart in one or more of these astronomical channels. For such a powerful particle accelerator, it should be visible in some of these channels. Once we identify the counterpart, we can investigate it in those channels where it is visible and try to understand how this accelerator works."

Led by Japan and including scientists from 12 other nations, JEM-EUSO is a large international space mission. The UAHuntsville team includes Dr. Adams and Massimiliano Bonamente, Michael Briggs, Valerie Connaughton, Evgeny Kuznetsov and John Watts. In addition to UAHuntsville, the U.S. team led by Prof. Angela Olinto of the University of Chicago includes scientists from the Colorado School of Mines, Marshall Space Flight Center (MSFC), University of Wisconsin in Milwaukee and Vanderbilt University.

The total five-year budget for JEM-EUSO is $4.4 million, of which $1.14 million goes to UAHuntsville and $840,000 goes to MSFC. UAHuntsville and MFC will be responsible for designing and operating a ground-based calibration system which uses flash lamps to check that the intrinsic luminosity of the cosmic ray tracks are correctly measured by JEM-EUSO.

"UAHuntsville's role is to provide the ground-based calibrators for the experiment. We will verify that the energy cosmic ray is being measured accurately and provide data to improve that accuracy," Dr. Adams said. "We must measure the energy to determine the energy spectrum. Moreover, we need to know if the energy is high enough ­- greater than 10 joules per particle - because such high energy particles can only arrive from relatively nearby in the universe."

In addition to the flashers, the Colorado School of Mines will provide laser calibration sources. Calibration units, consisting of flashers and the lasers, will be deployed on mountaintops as various sites around the world and one unit will be routinely flown out over the Atlantic onboard a NASA aircraft stationed at Wallops Fight Facility in Maryland.

UAHuntsville will participate in deploying and operating these calibration units, as well as analyzing the data and using it to calibrate the JEM-EUSO data.

UAHuntsville will also be responsible for processing all the data from the mission and placing it in a public archive maintained by NASA.

"This satisfies a NASA requirement for public release of the data," said Dr. Adams. "Of course, like the other scientists in the experiment, we will participate in the analysis of the data from the mission in order to measure the energy spectrum and look for the sources."

The mission is being undertaken by a collaboration of scientists and engineers from around the world. "It brings together the best experts on every aspect of the mission. This will help to make the mission successful," said Dr. Adams. "Because of the importance of this mission, those institutions involved will attract students, especially graduate students and postdoctoral fellows who what to be part of this exciting mission. This will strengthen the astrophysics programs in these institutions." 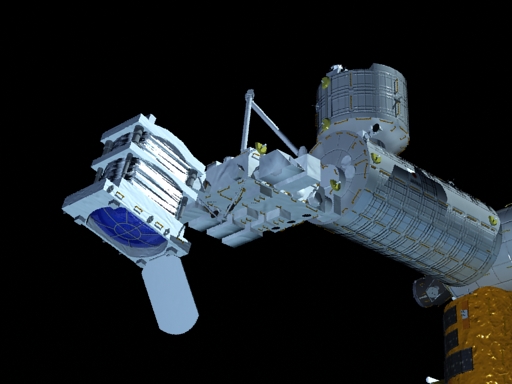 Illustration of the JEM-EUSO instrument.