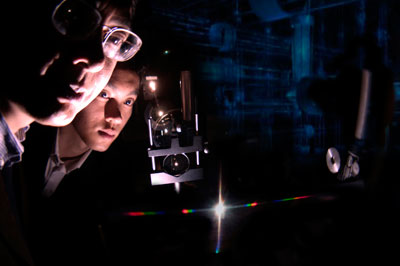 By bringing nanophotonics technology to traditional optical spectroscopy, a new kind of optical spectrometer with functions of sensing and spectral measurement has been recently demonstrated by a research team at The University of Alabama in Huntsville.

The nanostructures, such as nanoholes or nanoslits, are made by using a tightly focused electron beam, a technique called electron-beam lithography. Nanostructure patterns were first drawn with a computer and then sent to the electron-beam lithography machine to control the movement of the tightly focused electron beam to write nanoholes or any other nanostructure patterns in a thin layer of special polymer called e-beam resist.

The e-beam written polymer layer is then developed so the nanostructure patterns are imprinted to the thin polymer layer. The patterned polymer layer works like a mask and an argon ion etching process is used to transfer the pattern from the polymer layer to the thin metal film underneath it. This device was made by Haisheng Leong, a graduate research assistant at UAHuntsville.

The super nano-grating is a super-period nanohole array drilled in a thin gold film on a transparent glass substrate. The thickness of the gold film is 60 nanometers and the size of the nanoholes is about 100 nanometers. The periodic nanoholes in the thin metal film support collective free electron oscillations, referred to as surface plasmons, in the nanostructured metal.

The spectrometer sensors can detect toxins or contaminants in very small quantities. UAHuntsville recently has filed a patent to license the new technology.